Chief Petty Officer Zachary Weymer returns to the long-term parking lot at Yokosuka Naval Base on Tuesday, where his $13,000 new motorcycle was stolen last year. Weymer was reimbursed only $3,000 for his loss, because he was unable to obtain theft insurance in Japan. Others who have either had their vehicles stolen or vandalized at the same garage say the base should provide better security for vehicles during ship deployments. (Erik Slavin / S&S)

Chief Petty Officer Zachary Weymer returns to the long-term parking lot at Yokosuka Naval Base on Tuesday, where his $13,000 new motorcycle was stolen last year. Weymer was reimbursed only $3,000 for his loss, because he was unable to obtain theft insurance in Japan. Others who have either had their vehicles stolen or vandalized at the same garage say the base should provide better security for vehicles during ship deployments. (Erik Slavin / S&S) 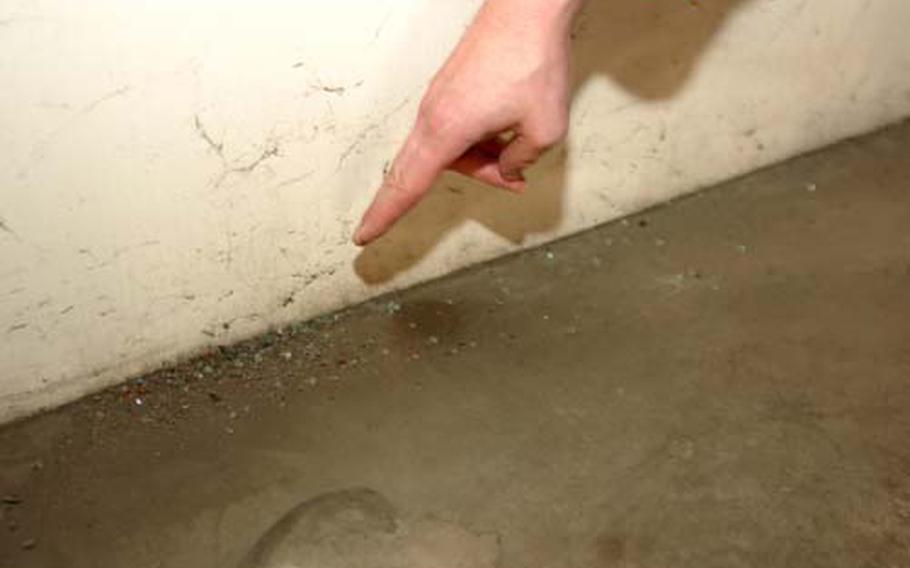 Weymer points to broken glass at the long-term parking lot at Yokosuka Naval Base, where his $13,000 new motorcycle was stolen last year. (Erik Slavin / S&S) The panels and interior of this 1993 Nissan Skyline lay ruined at the Yokosuka Naval Base Autoport, earlier this week. Petty Officer 1st Class Charles Briggs returned from his deployment aboard the USS Shiloh March 5 to find his car ransacked at the base&#39;s long-term parking lot. (Courtesy of Charles Briggs) Once a high-performance sports car, this 1993 Nissan Skyline sits without a hood, turbo system and several other stolen engine parts at the Yokosuka Naval Base Autoport. Briggs is moving to the United States in a few days and says he will have to junk the car. (Courtesy of Charles Briggs)

YOKOSUKA NAVAL BASE, Japan &#8212; Sailors who have lost thousands of dollars to vehicle thieves and vandals say it is time the base strengthened efforts to keep their property safe.

Although base security officials say that such crimes are relatively infrequent, two crimes this month and another from last year, where two motorcycles worth a combined $25,000 were stolen, are among reported incidents that have frustrated sailors who thought the base was more secure.

In the case of the motorcycles, video evidence that might have helped investigators was either destroyed or misplaced, according to a Naval Criminal Investigative Service report and interviews by Stars and Stripes.

On March 5, Petty Officer 1st Class Charles Briggs returned from six weeks at sea aboard the USS Shiloh to find the hood, turbo-charger system and about $2,500 worth of parts missing from his customized 1993 Nissan Skyline sports car.

Briggs is moving to a new station in the U.S. this week and says he has little choice but to junk the car.

The base&#8217;s only designated long-term parking lot &#8212; the top two decks of the parking garage next to The Sullivans School &#8212; has no security cameras or gates.

Base security Master Chief Petty Officer David Aguilera noted that stateside bases have secured long-term parking lots, but the Yokosuka garage is considered parking &#8220;at your own risk.&#8221;

Aguilera looked through past reports and found 16 cases of vehicle theft or vandalism within the past three years, though he conceded the number of unreported cases may be higher.

Motorcycle owners have suffered the greatest losses, because neither on- or off-base insurers offer motorcycle theft coverage.

Schritter&#8217;s and Weymer&#8217;s best chance at finding out who stole their motorcycles went nowhere. Video footage from security cameras at the base&#8217;s two gates &#8212; which might have shown the motorcycles or transport vehicles leaving about the time the motorcycles were stolen &#8212; is normally erased after 20 days. NCIS agents formally requested that video 14 days after the incident but were told the footage no longer existed, according to the NCIS investigation report.

When asked to account for the missing video this week, base officials declined to comment, citing force protection considerations.

Base officials did confirm the most recent case of vehicle vandalism &#8212; a smashed window and cracked windshield on an SUV &#8212; which likely happened sometime between midnight and early morning Sunday in front of Commander Naval Forces Japan headquarters.

Aguilera asked for the community&#8217;s help in reporting any suspicious activity, and recommended that sailors on deployment have friends or family members check on their vehicles.

Schritter, who works for Yokosuka&#8217;s Ship Repair Facility and is often deployed, said he feared taking that last piece of advice.

Owning a motorcycle in Japan is an insurance gambleServicemembers thinking of shipping an expensive motorcycle to Japan may want to think twice.

Some Japanese motorcycle shops offer theft reimbursements on a limited basis, if the buyer knows what to ask for and can read a Japanese legal contract.

Both chiefs carried AIU liability insurance, but that didn&#8217;t cover the loss. They received the money from the Navy under the federal Military Personnel and Civilian Employees Claims Act, which doles out reimbursements at each service&#8217;s discretion.

The claims act cites $40,000 as the maximum payout in a given claim. However, the act also includes a depreciation guide listing maximum claims on everything from &#8220;bric-a-brac&#8221; to taxidermy supplies.

The act does allow up to $20,000 reimbursement for vehicles stolen or damaged during government-authorized shipment or storage. Schritter and Weymer say that parking their motorcycles in a government long-term storage lot should qualify them for full reimbursement.

However, the claims adjuster hired by the Navy Judge Advocate General in Pearl Harbor, Hawaii, disagreed and capped the reimbursement at $3,000.

Weymer says that when they followed up with the Navy, they were told they should have had theft insurance. &#8220;They basically blame us for not having full coverage theft, but nobody can tell us where to get it,&#8221; said Weymer, who owned his new Yamaha sport bike for 13 days before it was stolen.

Both Schritter and Weymer asked multiple base offices where they could get theft insurance, and no one knew, they said. Each tried USAA and Geico in the U.S., but were turned away, they said.

Motofoot, a dealer located near Camp Zama and Naval Air Facility Atsugi in Sagamihara city, offers 90 percent credit toward purchase of Suzuki motorcycles only, if a Suzuki bought at the shop is stolen.

Buyers must pay 5 percent of the motorcycle&#8217;s value, but the policy cannot be renewed after the first year.

&#8220;There is a high risk [of theft],&#8221; said employee Shuzo Sato, explaining why they do not extend the policy beyond the first year.

Red Baron in Yokosuka offers a similar reimbursement on any motorcycle bought at the shop. The plan is renewable, but each year includes 90 percent of the coverage from the year before.