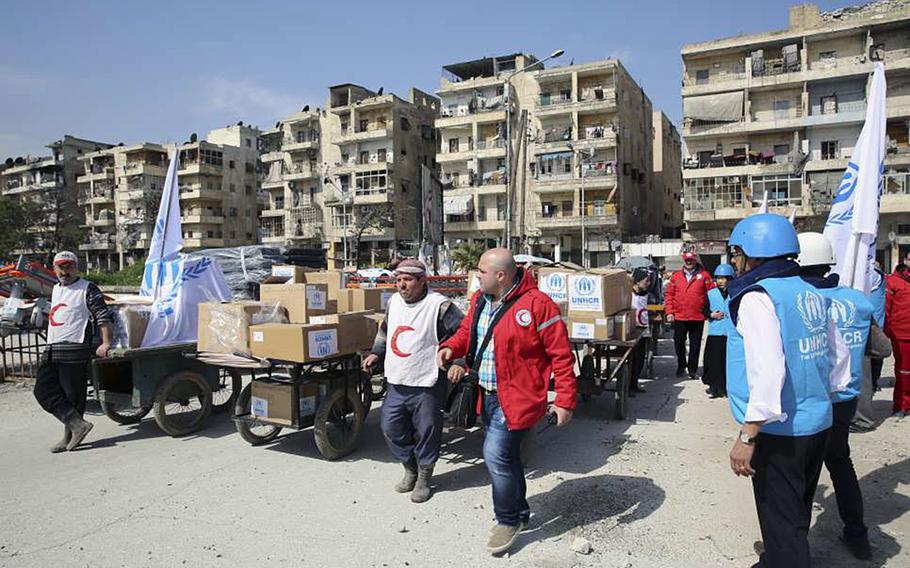 DAMASCUS, Syria — Syrians displaced by war and living in their own country — mainly on the government side of the front lines — are far greater in number than those fleeing to Europe, who have received the bulk of media attention in the past year.

International aid officials in Damascus say the civil war, now in its sixth year, has forced more than half of Syria’s prewar population of 23 million to leave their homes.

“While more than 4 million people have fled the country, the real problem is inside Syria, where 8 million have been displaced, many multiple times,” said Pawel Krzysiek, spokesman for the International Committee of the Red Cross in Damascus.

“The only viable solution for those living in (war-torn) places is to leave them.”

Although nobody has exact figures on the whereabouts of the internally displaced people, or IDPs, aid officials and nongovernmental organizations say the vast majority have sought shelter in areas controlled by the government of President Bashar Assad.

“There is no doubt that many, many more displaced people are on the government side than on the opposition side,” Krzysiek said.

About 4.84 million Syrians have fled abroad since 2011, and 8.7 million are estimated to have been displaced within Syria, according to latest statistics released by the U.N. High Commission on Refugees. In 2016, the United Nations appealed for $7.73 billion in vital new funding to help them.

Because many countries are now placing restrictions on the number of refugees who can enter their borders, thousands of vulnerable people have been left stranded within Syria. Many of those remaining are too poor to leave and depend heavily on international aid agencies for food and other supplies. Humanitarian aid groups say they are hard-pressed financially to meet the needs of such large numbers of near-destitute people.

On Thursday, international relief groups delivered aid to the rebel-held Damascus suburb of Daraya for the first time since it was besieged in 2012, The Associated Press reported. The delivery came hours after the United Nations said the Syrian government approved access to 15 of the 19 besieged areas within the country.

It has proved difficult for non-Islamic aid agencies to deliver food and medical supplies to some areas under opposition control because the pro-Western rebels are often intermingled with fighters from the Nusra Front, al-Qaida’s Syrian affiliate.

“On the government side, things are much better organized,” said the Western official, who asked not to be named because he was not authorized to speak to journalists.

Although regime security forces have lost control of large swaths of territory to opposition groups, including the al Qaida-affiliated Nusra Front and the extremist Islamic State, about three-quarters of the population still lives in regime-held territory.

Nearly 80 percent of those displaced by the war within Syria have fled to government-held parts of the country, a European diplomat said. Less than a quarter have chosen the side controlled by the various rebel groups, said the diplomat, who could not be named under his nation’s standing rules.

“This probably also shows where their political preferences lie,” he said.

Opposition sympathizers acknowledged that most Syrians preferred the government side but denied this was because they supported the regime.

Rami Abdurrahman, director of the Syrian Observatory for Human Rights, a British-based monitoring group widely regarded as favoring the opposition, dismissed suggestions that this showed that most people preferred the regime to the rebels.

“It is 100 percent true that the large majority of people who don’t want to escape Syria go to the regime areas,” he said in a telephone interview. But, he added: “These people don’t care about politics. They just want to stay alive and opposition areas are not safe.”

For example, Abdurrahman said at least 1.5 million people from rebel areas in the northern, war-torn provinces of Idlib and Aleppo had sought shelter in pro-government areas along the coast, including the port cities of Tartus and Latakia, because they were relatively free of the violence afflicting other parts of the country.

Among Syria’s neighbors, Turkey currently hosts a record 2.5 million Syrians, according to the U.N.

In Lebanon, Syrians — who number about 1.1 million — account for a fifth of the population. About 600,000 are registered in Jordan, where they account for about 10 percent of the inhabitants.

Sunnis made up about two-thirds of Syria’s prewar population. Most of those joining the rebellion and those fleeing the country and settling in refugee camps in Turkey and Jordan are rural Sunnis, many of them intensely religious, aid officials say. In contrast, many urban Sunnis — who tend to be nonreligious — have sided with the government, as have overwhelming majorities of Christians, Shiites, Druze, Kurds, Armenians and other minorities.