Vandals strike vehicles, homes affiliated with the US military on Okinawa 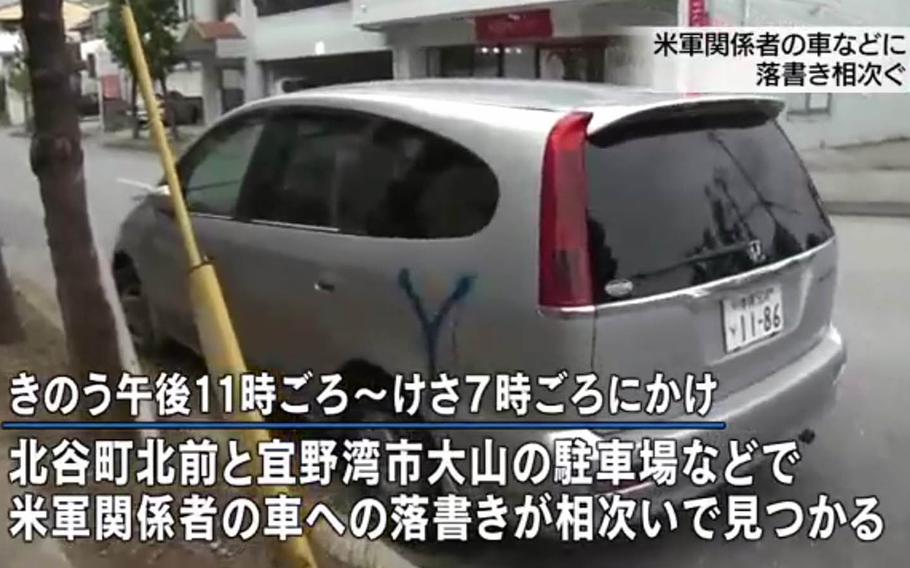 A number of U.S. military affiliated vehicles and apartment buildings were vandalized over the weekend, shortly after a fatal vehicle accident involving a Marine and a Japanese national.

“Y” license plates indicate the owner is covered under the status of forces agreement between U.S. and Japan and is in some way linked to the U.S. military.

Some walls at the buildings’ parking lots were also vandalized, said police, who were alerted to the issue by military police at Camp Foster.

The vandalism consisted of dark-blue graffiti spray painted onto walls and vehicles, Okinawa police said. The letter “Y” was painted on vehicles along with a “two-leaf clover” symbol. Police said they are unsure of its meaning.

Okinawa police are investigating the incidents and declined to comment on motive or whether they think U.S. personnel were targeted.

Marine Corps officials told Stars and Stripes they had no information available about the incidents.

Police on the southern island prefecture arrested Lance Cpl. Nicholas James-McLean early Sunday on suspicion of negligent driving resulting in death and driving under the influence of alcohol. A breath test indicated that he had a blood-alcohol level that was three times Japan’s legal limit of 0.03 percent.

Taira died at local hospital from chest wounds and bleeding suffered in the crash, the spokesman said. James-McLean had minor injuries. Servicemembers on Okinawa must remain confined to their base or homes after liberty restrictions were imposed by U.S. Forces Japan late Sunday. All Japan-based servicemembers are prohibited from purchasing or consuming alcohol on or off base until further notice.