Buy Photo
Van Cliburn with his mother, Rildia Bee Cliburn — his only piano teacher until he entered the Juilliard School. (Ted Rohde/Stars and Stripes)

Buy Photo
Van Cliburn with his mother, Rildia Bee Cliburn — his only piano teacher until he entered the Juilliard School. (Ted Rohde/Stars and Stripes) Buy Photo
Van Cliburn gestures as he talks to reporters upon his arrival at Heidelberg, Germany, on August 18, 1958. (Gus Schuettler/Stars and Stripes) 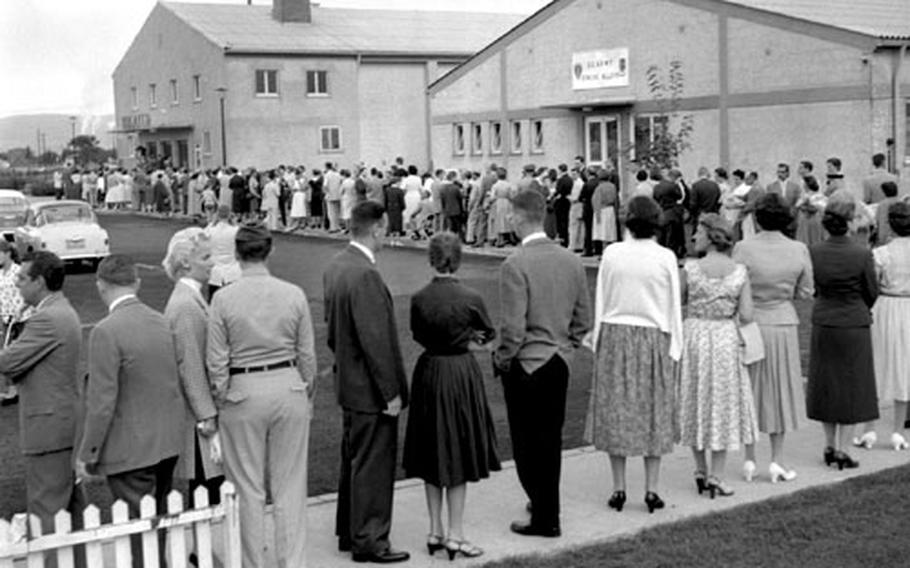 Buy Photo
Music fans line up to hear Van Cliburn play at Heidelberg, Germany, August 20, 1958. Those who were unable to get into the theater gathered on the lawn, despite bad weather, to listen through loudspeakers. (Gus Schuettler/Stars and Stripes) 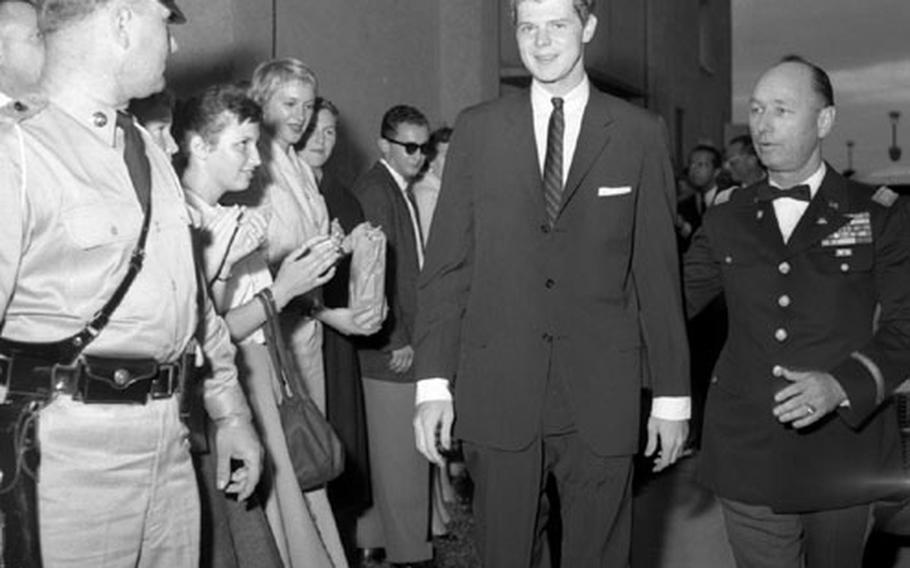 Buy Photo
Van Cliburn is escored past a group of fans as he arrives for his concert in Heidelberg. (Gus Schuettler/Stars and Stripes) Buy Photo
Pianist Van Cliburn, 22, relaxes during an interview in London in June, 1958. Two months earlier, he had stunned the world by winning the International Tchaikovsky Competition in Moscow. (Ted Rohde/Stars and Stripes)

VAN CLIBURN, 23-year-old American "ambassador at the keyboard," has taken London by storm with his pianistic prowess, just as he captivated music audiences in Moscow and New York City earlier this year.

The 6-foot-3 Texan, who had never been outside the U.S. until he walked off with the International Piano Competition in Moscow in April, made his British debut at the Royal Albert Hall June 15 and received tremendous acclaim from the London critics.

Cliburn arrived in London from a triumphant tour of the U.S., where he was accorded the first ticker-tape parade ever accorded a musician in New York City. Later he was received by President Eisenhower at the White House.

A serious young man who has retained his modesty in the face of adulation usually reserved for national heroes, Cliburn is scheduled to perform with the Philadelphia Orchestra conducted by Eugene Ormandy in the U.S. National Theater at the Brussels World's Fair on July 5.

"I still can't believe all this is happening to me," the curly haired Cliburn said at a press conference in London. "I said to my mother only yesterday, 'If this is a dream, I hope I never wake up.' "

The pianist's mother, Mrs. Rildia Bee Cliburn, was his only teacher until he entered the Juilliard School of Music in New York City at 17. His father, Harvey Levan Cliburn, for whom he is named, is an oil company employee in Texas.

Mrs. Cliburn, a former concert pianist, began teaching her son to play at the age of three. The youngster made such fine progress that he performed with the Boston Symphony in Texas at the age of 12.

"My mother is a wonderful pianist," Cliburn said in his soft drawl. "I have to say this even though she is my mother. She never acted like a mother when she was teaching me — she was always very stern."

Cliburn noted that as a youngster he played a clarinet and marched in the high school band at football games in Kilgore, Texas, but still had to find time to practice four hours daily on the piano. Today, he said, he spends six to eight hours a day at the keyboard.

"I've always had to watch my hands, so my main hobbies were swimming, hiking and going to the theater. As to romantic interests, I remember that I wanted to be a taxi driver at 14 and fell deeply in love with Rise Stevens, the Metropolitan Opera star."

Commenting on his plans for the future, Cliburn declared that he had many irons in the fire but felt that his success was not a fly-by-night affair and that he should proceed cautiously.

"A recording of the Tchaikovsky piano concerto that I made with the Symphony of the Air is due to come out on June 20 in the States and already the advance orders have topped the 200,000 figure," he said.

The young Texan received many prizes in the U.S. prior to his success in Moscow, where he outperformed 49 other pianists from 19 countries and received a 10-minute standing ovation from 1,500 Russians in the audience.

In 1954, he made his New York debut with the New York Philharmonic under Dmitri Mitropoulos and was acclaimed "as the most talented newcomer of the season." He later appeared as soloist with the orchestras of Cleveland, Pittsburgh, Denver, Dallas, Detroit, Indianapolis and Buffalo.

Cliburn had planned to make his first European tour later this year when he was encouraged by his former teacher to enter the Moscow competition. Since his Soviet triumph, he has been virtually besieged by requests for concert appearances in the U.S.

The pianist will play the Tchaikovsky concerto No. 1 and the Rachmaninoff No. 3 at the Brussels fair, two of the three concertos he performed in Moscow to win the Soviet prize. In all, the young artist has mastered 15 concertos.

"I play jazz to relax," Cliburn said. "I find jazz very relaxing to listen to, but as far as its musical value goes, I think it's here today and gone tomorrow."