Next stop, Camp Pendleton, Calif., according to the boxes of medical records stacked up at Camp Hansen, Okinawa, on Wednesday. (Tyler J. Hlavac / USMC)

Next stop, Camp Pendleton, Calif., according to the boxes of medical records stacked up at Camp Hansen, Okinawa, on Wednesday. (Tyler J. Hlavac / USMC) 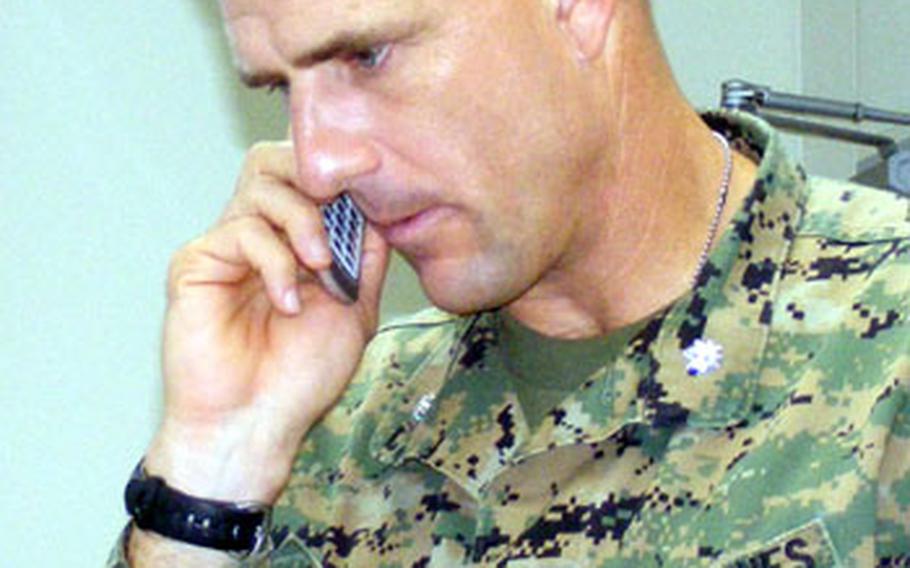 CAMP HANSEN, Okinawa &#8212; Looking back on the last year, Lt. Col. Francis Donovan believes having his 7-month deployment with the 31st Marine Expeditionary Unit extended to a year had some advantages.

Donovan, commander of Battalion Landing Team 2/1, is preparing to leave Okinawa soon, along with some 1,200 other Marines and sailors returning to their home units in the U.S. Their deployment was extended last March in a move that gave other Marine units time needed in the United States to train for duty in Iraq.

The amazing thing about his men, Donovan said, is they took the news in stride.

&#8220;These young Marines joined after 9/11 and came in to fight, so you can bet they were disappointed to know they weren&#8217;t going to Iraq,&#8221; Donovan said. &#8220;But I&#8217;m proud of the way these young Marines and sailors picked up and moved on, realizing how important this deployment was. They did this job for another five months extremely well.&#8221;

During the year, the 31st MEU traveled from the Demilitarized Zone on the Korean peninsula to Queensland, Australia, with other stops in Hong Kong, the Philippines and Cambodia.

Some were dispatched last fall to Bangladesh to help deliver humanitarian assistance in the wake of Cyclone Sidr.

&#8220;In Korea, we accomplished two major amphibious landings and did some live-fire training on a range on the DMZ,&#8221; Donovan said. &#8220;And in Australia, our guys went on a rugged 60K hike on their feet in rugged terrain and freezing, torrential rain.&#8221;

In the Philippines and Cambodia, the 31st MEU took part in medical and dental civil-action projects, treating more than 5,000 patients and providing other humanitarian aid, such as repairing schools and bridges. They were the first MEU to come ashore in Cambodia since the Vietnam War era, Donovan said.

&#8220;And the antiterrorism training we took part in with our Philippines counterparts was really important,&#8221; he said. &#8220;It showed our men that even though they weren&#8217;t in Iraq or Afghanistan, they were still an important part of the war on terror.&#8221;

Donovan said the joint training with military units of other countries and the humanitarian missions will benefit his Marines whenever they do deploy to Iraq.

It&#8217;s training that Sgt. Jeff Olson, of 1st Platoon, Fox Company, said he could have used during his deployment to Iraq two years ago.