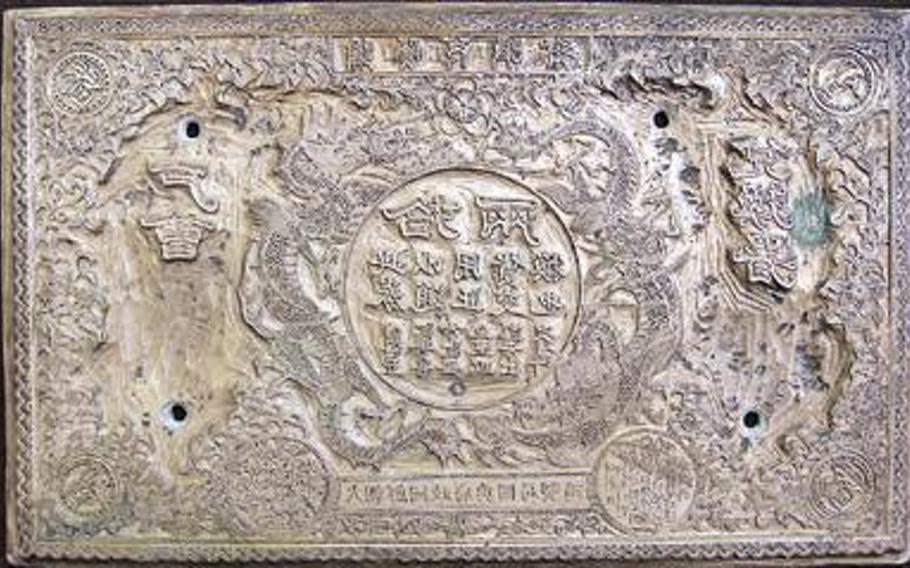 The U.S. will return this 120-year-old bronze plate to South Korea on Sept. 3 in a ceremony in Seoul. The plate was stolen by a U.S. servicemember from a palace in Seoul in 1951 during the Korean War. (Courtesy of South Korea’s Cultural Heritage Administration)

The U.S. will return this 120-year-old bronze plate to South Korea on Sept. 3 in a ceremony in Seoul. The plate was stolen by a U.S. servicemember from a palace in Seoul in 1951 during the Korean War. (Courtesy of South Korea’s Cultural Heritage Administration) A bronze plate similar to this one, on display in the National Palace Museum of Korea, will be returned to the South Korean government on Sept. 3, more than six decades after a U.S. servicemember stole the currency plate from Seoul?s Deoksu Palace during the Korean War. (Courtesy of South Korea’s Cultural Heritage Administration)

SEOUL — More than six decades ago, a U.S. servicemember came home from the Korean War with a rare – and valuable – souvenir: a dollar bill-sized bronze plate lifted from one of Seoul’s royal palaces.

Used to print some of Korea’s first modern currency notes, the 120-year-old plate is engraved with elaborate snaking dragons, flowers and Chinese characters that say it was manufactured by the “great Joseon government.” Only 13 such plates are believed to exist.

The plate is so important that Seoul has declared it a cultural artifact. And next Tuesday, following a three-year federal investigation that led to the arrests of two people, the U.S. ambassador will formally return it to the South Korean government. It’s the first time that the U.S. has repatriated a cultural artifact to South Korea, according to a U.S. Embassy statement.

Authorities said the U.S. servicemember took the plate in 1951 from Deoksu Palace in the heart of Seoul, near what is now Seoul City Hall, and illegally took it home.

Details about the servicemember or why he took the plate were unavailable, but his family offered to sell it in 2010 in Michigan after his death. That April, an official with the South Korean embassy in the U.S. was tipped off by State Department officer that a number of Korean antiques, including the currency plate, would soon be going up for auction.

The official warned an Oxford, Mich., gallery that selling artifacts confiscated during wartime was illegal, but the auction went forward. The plate was bought by a South Korean man, Yoon Won-young, who was living in the U.S. and refused to give it to the South Korean government.

At the embassy official’s request, the Immigration and Customs Enforcement branch of the U.S. Department of Homeland Security began an investigation that was broadened in June 2010 to include the Korean Supreme Prosecutor’s Office.

U.S. authorities arrested Yoon in January and a representative of the Midwest Auction Galleries the next month. The currency plate was confiscated in July.

Neither Yoon nor the gallery representative were ultimately charged, although Yoon was discovered to be living in the U.S. illegally and was forced to return to South Korea.

South Korean officials said U.S. troops are believed to have stolen many items of cultural significance during the Korean War.

“So many Americans were stationed near our cultural assets, and they took them as souvenirs,” an investigator with the prosecutor’s office said, adding that many U.S. troops were camped near Deoksu Palace.

An official with South Korea’s Cultural Heritage Administration said Yoon bought the 1.5 lb. plate for approximately $35,000, but its true value is unknown.

“To South Koreans, it might be worth much more than that,” he said.