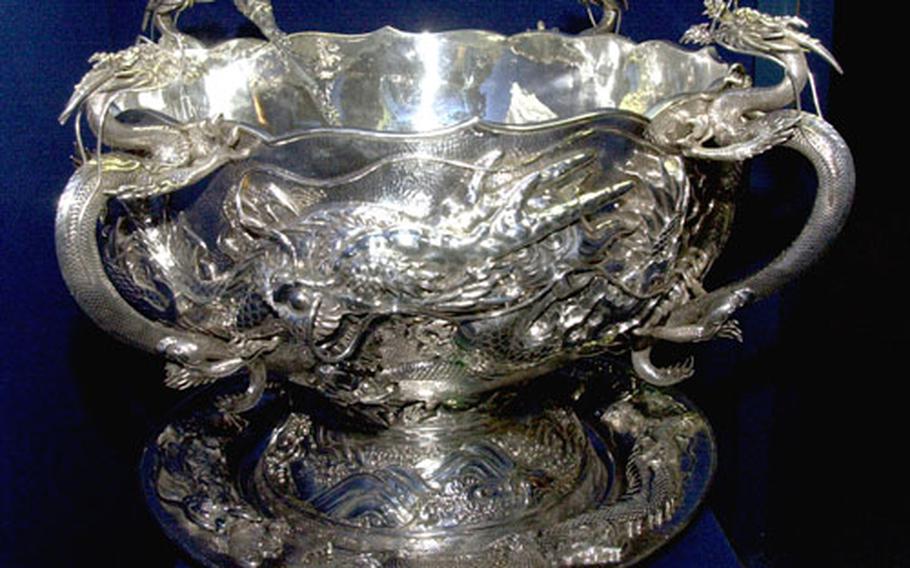 The valuable Liscum Bowl is back in 2nd Infantry Division hands after spending almost three years in the U.S. for refurbishment. (Erik Slavin / S&S)

CAMP RED CLOUD, South Korea &#8212; A valuable artifact gained by one of the 2nd Infantry Division&#8217;s most storied units in 1900 is back after years of refurbishment.

The Liscum Bowl and several dozen silver cups, estimated to be worth several hundred thousand dollars, will be kept on permanent display at the 2nd ID Museum on Camp Red Cloud.

The silver for the 90-pound bowl was first presented to the 9th Infantry, an ancestor of 2nd ID&#8217;s 2nd Battalion, 9th Infantry &#8220;Manchus,&#8221; for their valor while fighting in China during the Boxer Rebellion. The so-called Boxers were an armed faction of thousands of anti-Western Chinese who were trying to expel European business interests and American Christian ministries.

&#8220;The Liscum Bowl is the centerpiece of the museum collection,&#8221; said Mike Alexander, museum curator and director. &#8220;It represents all of the soldiers that fought, bled and died in the 9th Infantry.&#8221;

On July 13, 1900, the 9th Infantry fought for the walled city of Tientsin shortly after arriving as part of the American Relief Expedition to China.

Shortly before Commander Col. Emerson Liscum died from enemy fire, he is remembered for shouting &#8220;Keep up the fire!&#8221; to his men, who eventually claimed the city.

While searching the city, the unit found a mass of silver bars fused by heat, according to the official history. A Chinese prince then gave the unit the silver as an official gift for its service.

The bowl&#8217;s imperial dragons and other features were designed in China and then crafted in Japan. The unit received the finished bowl in 1903.

The Liscum Bowl weighs more than 90 pounds and holds about 14 gallons.

Several dozen silver cups bear the engraved names of all officers who served with the unit between 1900 and the Korean War.

After its refurbishment, it was housed at Washington&#8217;s 14th Street Center for Military History under the care of conservator Jeff Kimball.

Earlier this month, USFK Gen. B.B. Bell was notified while testifying before Congress that the bowl was still in Washington. On March 12, the bowl arrived on Bell&#8217;s flight at Osan Air Base. Its temporary display at the museum was completed two days later, Alexander said.