Valley’s complexities a challenge for GIs 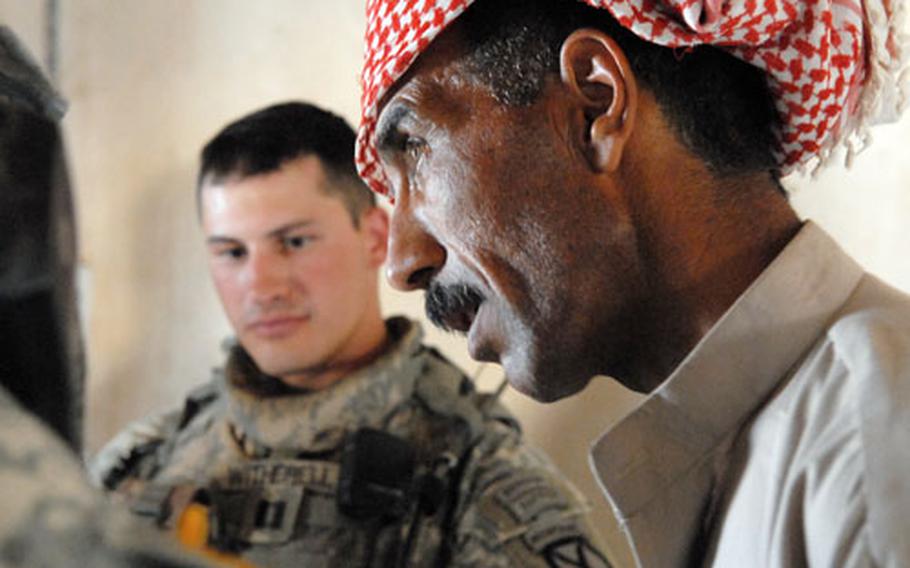 Taha Abdullah Hassin speaks through an interpreter Thursday to Capt. Blake Witherell (in background), commander of Company C, 2nd Battalion, 22nd Infantry Regiment, about the assassination of a sheik in his village two days earlier. The murdered man was the second such sheik assassinated in the area, which may suggest insurgents are reverting to more desperate tactics as they are quickly losing ground in the area. (James Warden / S&S)

Taha Abdullah Hassin speaks through an interpreter Thursday to Capt. Blake Witherell (in background), commander of Company C, 2nd Battalion, 22nd Infantry Regiment, about the assassination of a sheik in his village two days earlier. The murdered man was the second such sheik assassinated in the area, which may suggest insurgents are reverting to more desperate tactics as they are quickly losing ground in the area. (James Warden / S&S) 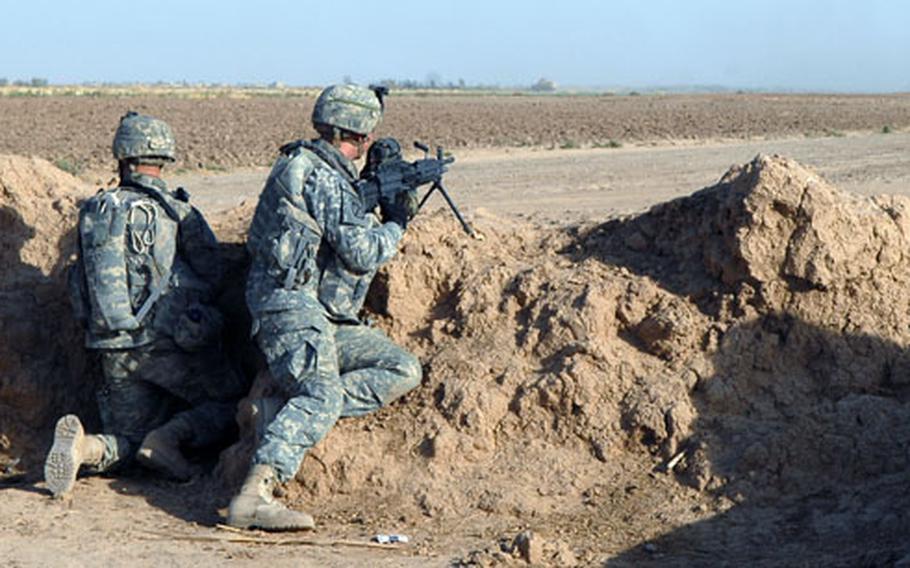 Two soldiers guard a road outside a cluster of houses near Garhat Gazan, Iraq. The village is one of several in the Rashaad Valley, the main focus of anti-insurgent efforts around Kirkuk. (James Warden / S&S)

KIRKUK, Iraq &#8212; The Americans had come to the funeral in the Rashaad Valley to pay their respects, but in the style of a Mafia wake, the funeral quickly became the site of life-and-death negotiations.

The tribe&#8217;s sheik had been murdered, and relatives blamed soldiers with 2nd Battalion, 22nd Infantry Regiment for involving him in the "Sons of Iraq," which they thought made him an insurgent target.

Capt. Blake Witherell, Company C commander, would have loved to start one of the groups in the area. But starting one so soon after the assassination could make local terrorist cells think they have the ability to dictate who runs the group. So he demanded that the town first stop rocket attacks in the area and give him information on two fighters thought to be in the area &#8212; something he required of a neighboring tribe.

The negotiations took place in an area that has become the military&#8217;s main focus, as much for its complexity as its danger. The Rashaad Valley is a wedge-shaped region southwest of the city that is bisected by an important thoroughfare leading into Kirkuk, and it is one of the last battlegrounds for the insurgency here.

Contested Iraqi regions tend to be split into two halves &#8212; one where most of the fighting occurs and one where insurgents actually live. The Rashaad Valley is no different.

The southern half is the insurgents&#8217; home, Witherell said. The fighters can hide in small villages by threatening residents or convincing them that they are wanted for no particular reason. Roadside bombs and other dangers are still a threat in this part of the valley, just not to the same extent as in the north.

The northern half of the valley sees most of the fighting because of the extensive road networks in the area, Witherell said. Patrol Base Bushmaster, occupied by Company B, sits right near the intersection of roads that insurgents use to move around. In the past month, a suicide car bomber killed one soldier and wounded 19, and a roadside bomb wounded three more.

In the past, though, huge swaths of the valley were dangerous. When 2/22 first arrived, Company C&#8217;s patrol base in Doria contained a unit that was just a little larger than a platoon, and there was little security on the way out to the base, said Lt. Col. Denis Sullivan, the battalion commander. Fighters shot a rocket-propelled grenade at the commander&#8217;s vehicle while the unit was still taking over responsibilities from its predecessor.

"[It] was really a killing zone for the enemy," he said.

Now the entire company lives on the base; soldiers even had to expand it to make more room. Meanwhile, Company D is stationed at a trial patrol base in another part in the south, although that may be vacated if the leaders find it&#8217;s not in a position to help them with their mission.

Add in two platoons at Patrol Base Bushmaster up north, and 2/22 has pushed a huge chunk of its soldiers off the main base in Kirkuk and out into the Rashaad Valley communities &#8212; a strategy used all across Iraq.

"I&#8217;ve swamped this area with patrols," Witherell said. "If they place [a roadside bomb] and attack me, they know they&#8217;re going to get picked on or get caught."

Sullivan has banned "presence patrols" &#8212; a beat cop-like tactic used in other areas in which soldiers sally forth mainly to show their faces and get to know a neighboring community. Soldiers who go out must have a clear purpose and specific details to be looking for.

But it&#8217;s the nonlethal tactics that may have had the most effect. The soldiers have become adept at following tribal politics. By prodding the right leader, the Americans can sway an entire tribe, Witherell said.

The battalion also hired 2,500 people for the "Sons of Iraq," a program that pays fighting-aged men to man checkpoints and watch major roads.

Many of them may have once been "economic insurgents," desperately poor men who attacked coalition forces only because terrorist cells offered them money to do so.

The Rashaad Valley fighters can be divided into two main camps: Local cells and groups associated with al-Qaida in Iraq. The local cells have been especially devastated, officials said. The al-Qaida associated groups are marginally better off because they have better financing, Witherell said. But these, too, are struggling and no longer have veterans with more than a decade of experience.

Whichever group they are a part of, the Rashaad insurgency is mostly provincial in scope, Sullivan said. Where Mosul and Baghdad draw fighters from outside their regions, most Rashaad cells depend on the locals.

"They are more than just on the run," he said. "They are in the state they know they are about to lose the area."

Yet growing security around the province has made the Rashaad area the focal point almost by default. In May, "significant acts" &#8212; a catch-all term for contacts with the enemy &#8212; reached their lowest level since 2004, said Col. Dave Paschal, commander of 1st Brigade, 10th Mountain Division. The 105 acts during that month were less than a third of the 350 that the brigade saw in July 2007.