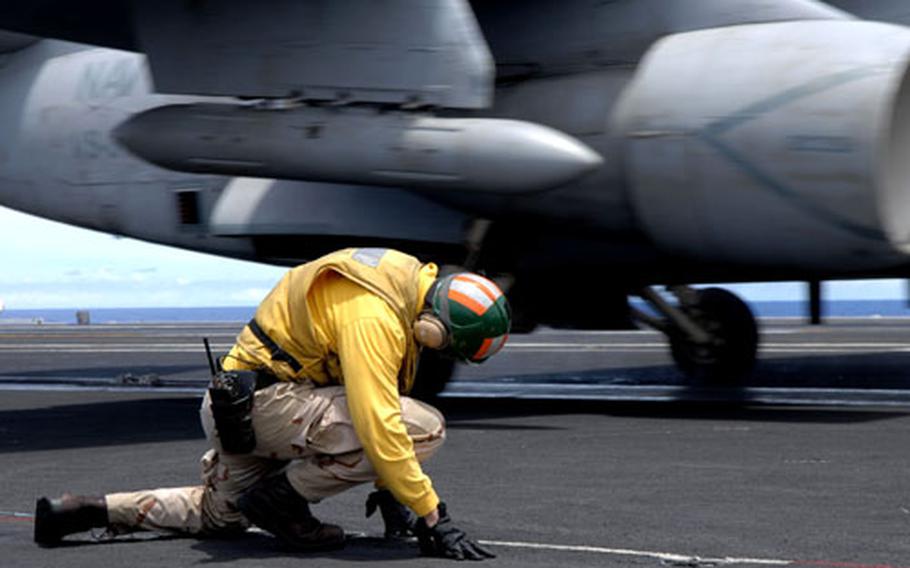 A catapult and arresting gear officer, also known as a shooter, braces himself after directing an S-3B Viking of Sea Control Squadron 31, the Top Cats, to launch off the flight deck of the aircraft carrier USS John C. Stennis during exercise Valiant Shield 2007. (Jon Hyde / U.S. Navy)

A catapult and arresting gear officer, also known as a shooter, braces himself after directing an S-3B Viking of Sea Control Squadron 31, the Top Cats, to launch off the flight deck of the aircraft carrier USS John C. Stennis during exercise Valiant Shield 2007. (Jon Hyde / U.S. Navy) A flight deck director guides an EA-6B Prowler of Electronic Attack Squadron 138, the Yellow Jackets, assigned to Carrier Air Wing 9, onto the catapult before it launches off the flight deck of the USS John C. Stennis. (Jon Hyde / U.S. Navy) An F/A-18F Super Hornet from the of Strike Fighter Squadron 154, the Black Knights, assigned to Carrier Air Wing 9, takes off from the flight deck of the USS John C. Stennis. (Paul J. Perkins / U.S. Navy)

About 22,000 servicemembers are taking part in the second annual exercise, which includes field training around Guam and command-and-control drills for component staff in Hawaii and San Diego.

About 30 ships and 280 aircraft were testing tactics, techniques and procedures used in joint operations in combat. Multiple live-fire training sessions by Navy and Air Force assets were scheduled throughout Valiant Shield.

Presser said Valiant Shield is laid out to sharpen cooperation among U.S. forces and enhance their ability to detect, locate, track and engage units at sea, in the air, on land and in cyberspace under a range of mission areas.

The USS Kitty Hawk Carrier Strike Group out of Yokosuka Naval Base, Japan, armed with Carrier Air Wing 5 from Naval Air Facility Atsugi, have linked up with the USS Nimitz and USS John C. Stennis strike groups. All three form the centerpiece of this year&#8217;s exercise puzzle, according to a Kitty Hawk news release.

&#8220;What our sailors do every day is important for regional stability,&#8221; Capt. Todd Zecchin, the Kitty Hawk commander, said in the release. &#8220;Training together with other services and other naval forces &#8230; refines the Pacific commands&#8217; ability to present a seamless joint force.&#8221;

Meanwhile, aircraft and personnel from Kadena Air Base, Okinawa, and Hickam Air Force Base, Hawaii, are among units that have become part of the 36th Wing at Andersen Air Force Base, Guam, for Valiant Shield. They&#8217;re expected to participate in joint training with Navy and Coast Guard forces.

Andersen also is serving as the temporary hub for 64 Air Force and 29 Navy aircraft, along with transient planes, during the exercise, a 13th Air Force news release stated.

Joint Task Force 519 is directing Valiant Shield, while the 13th Air Force is the lead planner. Both operate out of Hawaii.

&#8220;That time difference and distance is a challenge, so we&#8217;re exercising our staffs in Hawaii and San Diego from a command-and-control perspective. That&#8217;s a big part of it,&#8221; said Lt. Cmdr. John Filostrat, a Joint Task Force 519 spokesman. &#8220;We want to show that the Pacific region is important, and make sure we maintain peace and stability in the area.&#8221;

The exercise is scheduled to end Tuesday with all three carrier strike groups and other units sailing or flying in formation for a photo opportunity.

The following Pacific-based ships and units are participating in Valiant Shield 2007:

From Yokosuka Naval Base, Japan:

From Kadena Air Base, Okinawa:

From Andersen Air Force Base, Guam:

From Hickam Air Force Base, Hawaii: