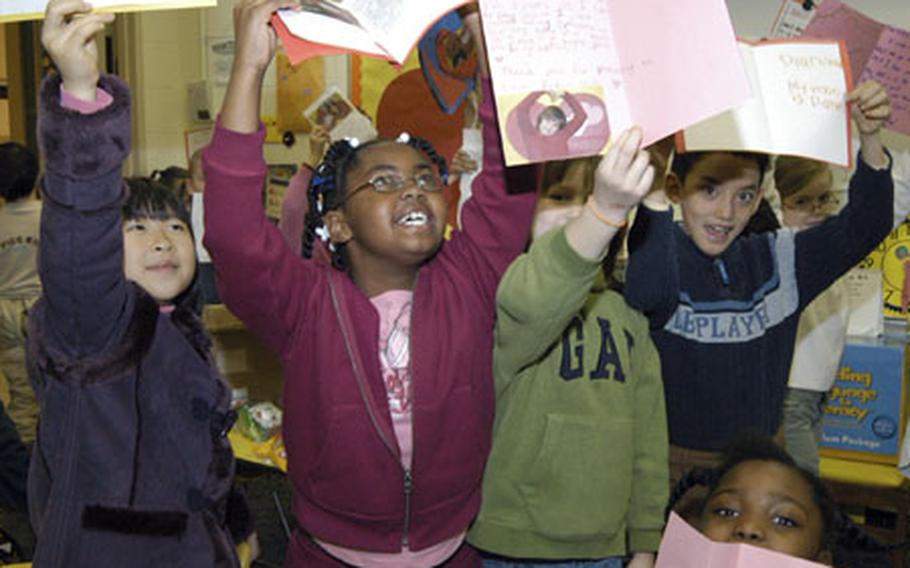 Though he&#8217;s serving in Iraq thousands of miles from home, Army Pvt. Victor Girau has a Valentine&#8217;s Day gift heading his way from the kids at Taegu American School in South Korea.

So does Army 1st Lt. Thomas Cho. So do almost 30 other U.S. soldiers in Iraq.

The Taegu American kids have prepared hand-made Valentine&#8217;s cards and holiday care packages with candy, health care items and other treats, according to a news release from the Army&#8217;s Area IV Support Activity in Daegu.

This is the third year students in grades K through 12 at the school on Camp George have sent such packages downrange.

&#8220;We thought it would be nice to continue the tradition here,&#8221; teacher Angela Griego was quoted in the release as saying.

So Griego and fellow teacher Charrylin Pigge worked to identify deployed soldiers by name and assigned each classroom a soldier.

Jennifer Sharp&#8217;s second-grade class added a big valentine card to Girau&#8217;s package. It carried a group photo of the students, their message to Girau and an interview questionnaire so they could learn more about him.

Kids in Patricia Minkle&#8217;s fourth-grade class already know something about Cho: He and Minkle are old friends and attended Taegu American together.

The school plans to send packages downrange monthly for the rest of the school year. Community members who want to contribute can bring items to the school office and can phone Griego or Pigge for more information at DSN 768-9501.