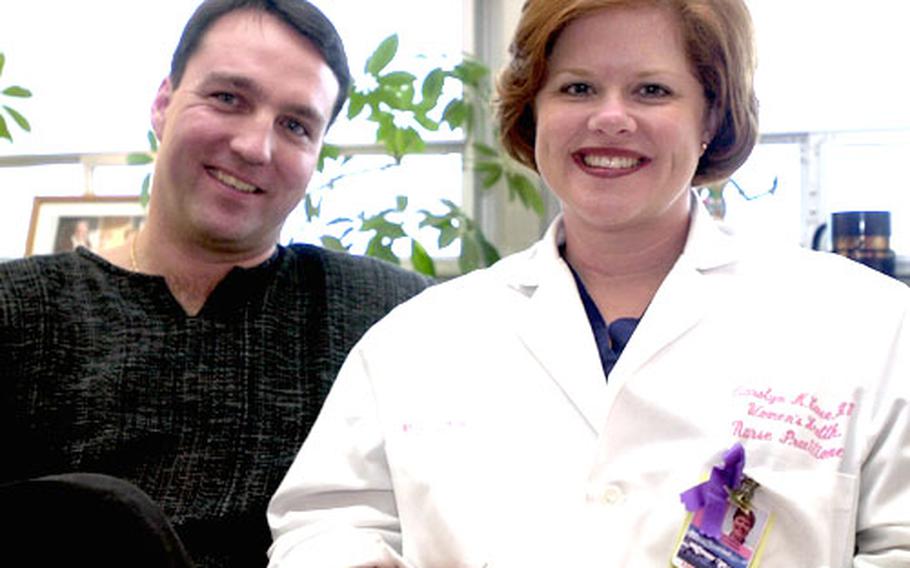 CAMP LESTER, Okinawa &#8212; Two U.S. Naval Hospital Okinawa nurses recently helped save the life of a Japanese man who was showing signs of a heart attack during a flight into Naha International Airport.

Omori, who is from Tokyo, was returning to Okinawa after two days of golf with friends in Taiwan. He has been on Okinawa since December 2003 for a construction project in Naha. Villecco and Currie were returning from a Thailand-Hong Kong vacation.

Omori said he wasn&#8217;t feeling quite right before the flight left Taipei.

Omori said he has chronic heart problems and already has gone through one operation for defective heart valves.

Omori asked a flight attendant to have an ambulance waiting at Naha airport.

&#8220;The flight attendant made the arrangement for me and at the same time asked passengers if there was a medical doctor aboard the plan,&#8221; he said. &#8220;Two U.S. Navy doctors immediately responded to the call and came to me.&#8221;

Villecco said the call for medical personnel went out about halfway into the one-hour flight. Both he and his wife &#8212; who worked as a nurse in an open-heart recovery ICU for 10 years &#8212; pushed their flight attendant buttons to make themselves known.

While Villecco talked with Omori, who disclosed his past heart problems, Currie said she asked the flight attendants for their medical kit, and while going through it, found some nitroglycerin pills.

Villecco said he gave Omori one of the pills every five minutes, and they worked quickly, taking his pain, on a scale of one to 10, from a seven to a one in a short amount of time. The nurses also asked flight attendants for oxygen, which they administered to the man.

After stabilizing Omori&#8217;s condition, Villecco and Currie stayed with him for the rest of the flight.

&#8220;I was half unconscious, but felt very secure knowing that doctors were right by my side, taking care of me,&#8221; he said.

Currie said as soon as the plane landed, Omori was the first off. &#8220;We walked him off the plane and took him to the ambulance and they took it from there,&#8221; she said.

Omori said once in the ambulance, he was transported to a local hospital where he stayed for 10 days.

Currie said they received a bottle of red wine from the head flight attendant and she received a call several days later from China Airlines officials, thanking the couple for their help.

Villecco said treating Omori was just another day at the office.

Omori recently e-mailed the couple, thanking them for what they had done. They said they were happy to hear he was doing better and plan on replying soon.