Vacation's over for DODDS students in Europe 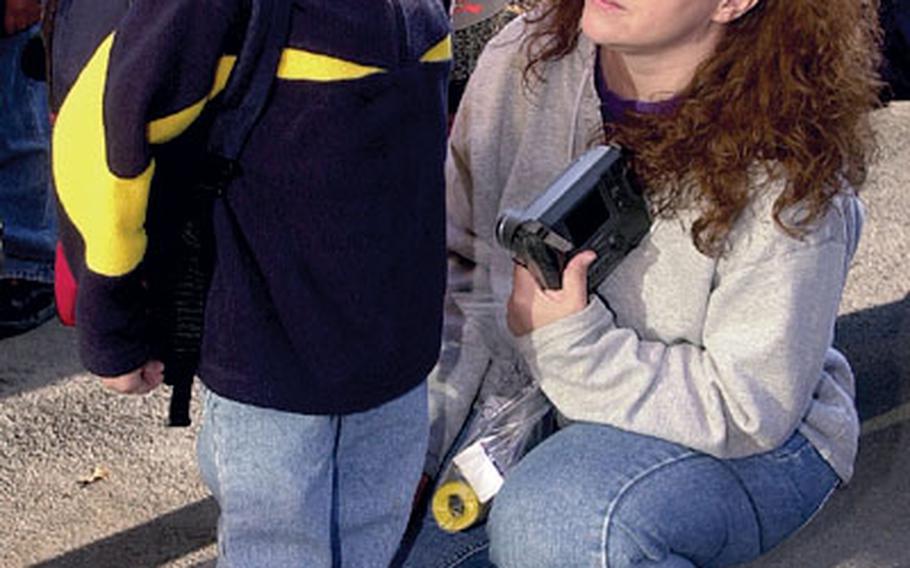 Denise Thacker tries to comfort her son, Zachary, 6, who wasn&#39;t too happy to learn that some of his friends from kindergarten won&#39;t be in his new first-grade class on the first day of the new school year at Rhein-Main, Germany, on Tuesday. (Raymond T. Conway / S&S)

Denise Thacker tries to comfort her son, Zachary, 6, who wasn&#39;t too happy to learn that some of his friends from kindergarten won&#39;t be in his new first-grade class on the first day of the new school year at Rhein-Main, Germany, on Tuesday. (Raymond T. Conway / S&S) A mother and son walk to school on the first day of school year at Rhein-Main. (Raymond T. Conway / S&S) First- to third-graders line up outside on the first day of the new school year at Rhein-Main. (Raymond T. Conway / S&S) 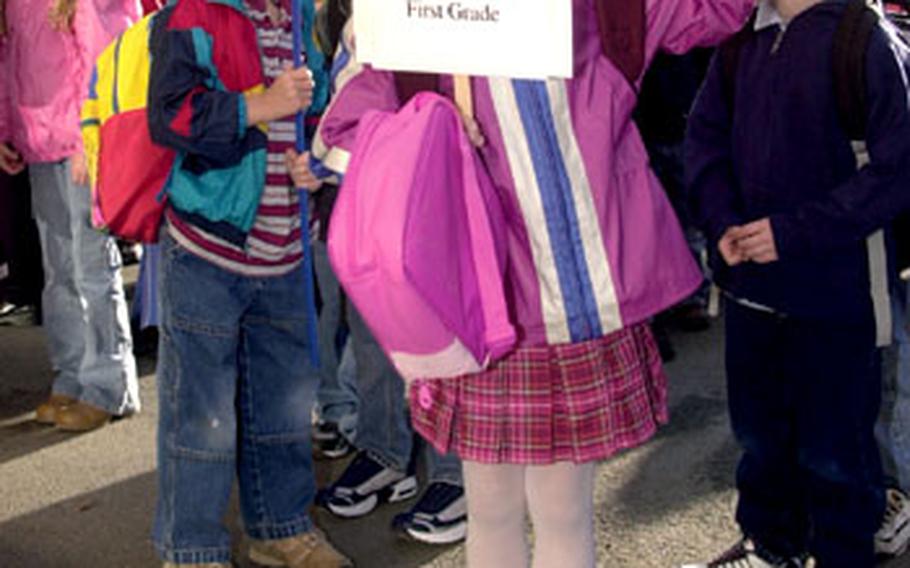 A first-grader waves goodbye to her family Tuesday on the first day of school at Rhein-Main. (Raymond T. Conway / S&S)

Tuesday&#8217;s schedule was fairly light, though, for many students. That was good news for those who took the &#8220;break&#8221; in summer break literally. Or for those who aren&#8217;t used to school much in general.

First-grader Dominic Shaima, attending classes at Aviano Elementary, looked like his brain was a bit overloaded when asked about his favorite subjects.

He had a lot of new classmates to meet, because Dad, Staff Sgt. Paul Shaima, and Mom, Anna, have just transferred back to Italy from the States. Dominic was born in Aviano in 1997, several years before the new school opened up last year.

He wasn&#8217;t the only one getting used to new surroundings, though.

Department of Defense Dependents Schools-Europe officials project they will instruct 4,255 first-graders this year &#8212; though the numbers won&#8217;t be official until the end of the month.

The latest student enrollment projection is 48,453. Of those, 1,825 are seniors. The two largest schools are near each other in Germany &#8212; Mannheim Elementary and Patrick Henry Elementary (Heidelberg) are each expected to have between 1,000 and 1,100 students. The largest high school is at Ramstein Air Base, where more than 900 students are enrolled.

Tuesday was a special day for students, teachers and parents across the continent.

The school employs about 130 teachers and staff members to keep the class sizes relatively low. Many of them stood outside to greet their new students.

There are more than twice as many DODDS staff members in Mannheim as there are students at Sevilla Elementary School in Spain. With a few dozen more military slots expected to be added to Mor&#243;n Air Base, Principal Steve Hain thinks his school might have as many as 60 students before the year is over.

There wasn&#8217;t a band to greet students in the morning. But classes started at the same time as in Germany. And during lunch, the entire student body played a game of capture the flag.

The fact that the temperatue was in the mid-80s with no clouds in the skies in Spain wasn&#8217;t bad either. Maybe summer&#8217;s not quite over for everyone after all.