Vacating Würzburg will be a massive mission 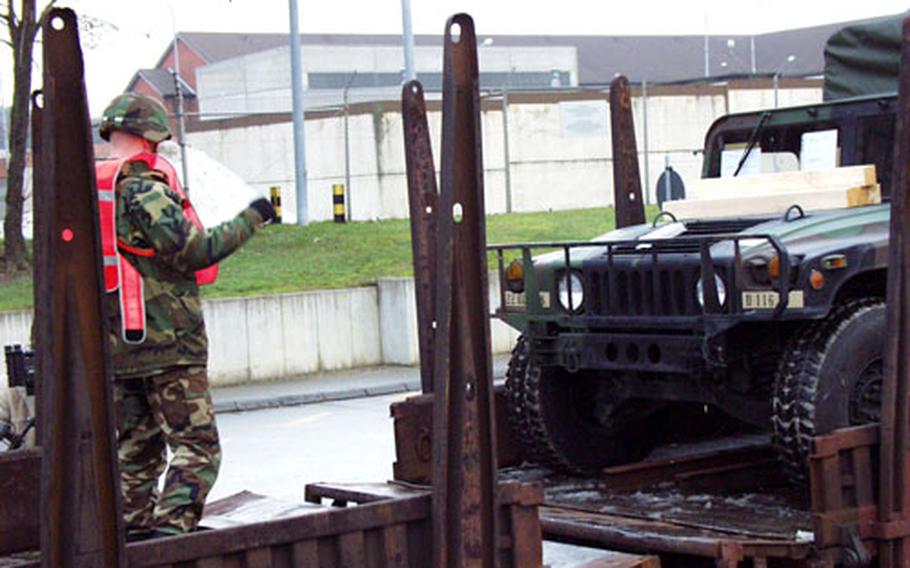 A 17th Signal Battalion soldier guides a Humvee aboard a troop transport train at the Harvey Barracks railhead in Kitzingen, Germany, in preparation for a deployment in January 2003. Bases in Würzburg, Kitzingen and Giebelstadt are to close by September 2007. The jobs of about 1,000 Department of Army civilian employees and 1,000 host-nation employees will be affected. (S&S file photo)

Moving is a pain.

It&#8217;s hard work. Myriad planning can drain the brain. Hands cramp from paperwork. Hearts can be ripped apart as old friends say goodbye while wondering about their futures.

And that&#8217;s just for one person or family. So imagine what it&#8217;s like when entire communities up and leave.

The Pentagon&#8217;s announcement on Friday that the U.S. Army would be vacating W&#252;rzburg and two nearby communities over the next two years will set into motion a massive mission to move people and their stuff, and to bring land and buildings up to snuff.

Those charged with overseeing the exodus said they&#8217;d work hard to make the transition as palatable as possible to the thousands of people affected. They also say they&#8217;d help the soon-to-be unemployed with finding employment elsewhere.

&#8220;Everyone from here and all the way back to headquarters is deeply committed that we take care of the soldiers, their families and civilians while they&#8217;re still living and working here,&#8221; said Russell Hall, director of Installations Management Agency-Europe, which oversees the installations scheduled to close in W&#252;rzburg, Kitzingen and Giebelstadt.

The base closings, which are scheduled to be completed by September 2007, will affect about 6,100 soldiers and 11,000 family members, according to U.S. Army Europe. In addition, the jobs of about 1,000 Department of Army civilian employees and 1,000 host-nation employees will be affected.

Dozens of military units will be moved, inactivated or converted into something new.

Intact units will await word as to when they leave and where they&#8217;ll be going, then spring into action. Other soldiers whose units are being inactivated will wait to hear about their next assignment. Acres of equipment will have to be accounted for.

&#8220;The personnel [from dissolved units] would be reallocated within theater or [transferred to the States],&#8221; said Robert Purtiman, a spokesman for U.S. Army Europe. &#8220;Equipment will be redistributed to fit the needs of the Army.&#8221;

Purtiman declined to elaborate about the process and referred further questions to information posted on the USAREUR Web site (www.hqusareur.army.mil).

As for the approximately 5,200 acres of land and 1,500 buildings that will be vacated, well, anyone who has dealt with a hard-nosed landlord can imagine the work required to return the property in an acceptable state. That, too, is the deal with the German government, which would reassume control of the property after the Americans leave.

&#8220;We have a very deliberate process that involves heavy participation with the host nation,&#8221; said Al Rasper, IMA-Europe&#8217;s engineering chief. &#8220;It is incumbent upon the U.S. forces to leave the establishments in a clean and orderly fashion.&#8221;

Rasper said that plumbing and electricity has to work and buildings must look good. The land itself, in particular that used by motor pools and other environmentally challenged units, needs to be free of contaminants and other hazardous substances.

Eventually, financial compensation for capital improvements made by the Americans needs to be hashed out and agreed upon, but that work would be left for the accountants and lawyers after the properties are vacated.

IMA-Europe has recent experience in the process as well, when last year&#8217;s closing of Bad Aibling Station in southeastern Germany resulted in the vacating of 300-plus acres and the unemployment of hundreds, including 117 local national employees, some who had worked there for decades.

&#8220;It proved that with our German partners we have a common understanding with regards to expectations,&#8221; Rasper said.

&#8220;There are a number of tools in place. There&#8217;s placement assistance, they can exercise their return rights [to return to former jobs in the United States and elsewhere], they can compete for new positions in theater or in the States, or they can take voluntary retirement.&#8221;