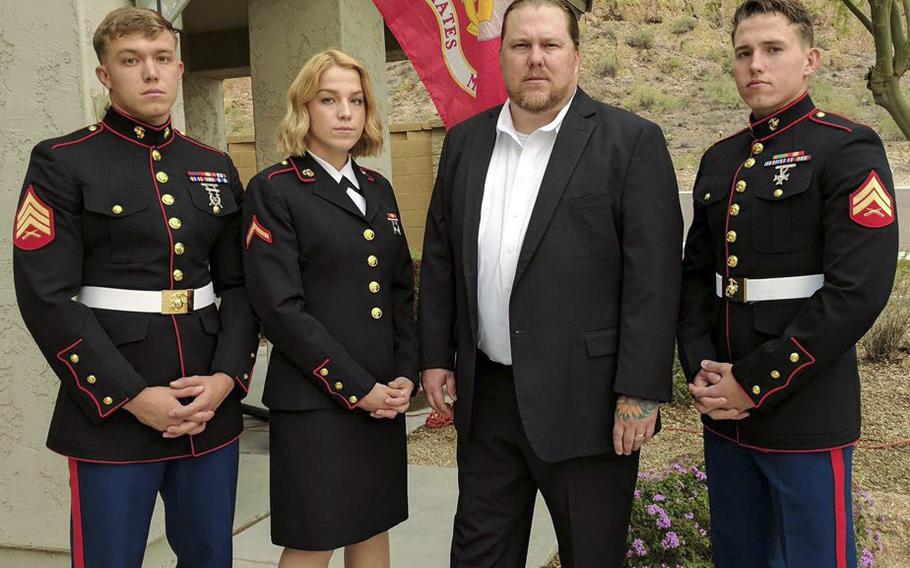 Marine Corps veteran Brandon Coleman with his children, all Marines, Brandon Coleman Jr., Breanna Coleman, and Trace Coleman, on Christmas Day in 2016. Coleman, a whistleblower at the Phoenix VA hospital who faced retaliation from managers in 2015, was assigned this week to the VA Office of Accountability and Whistleblower Protection. (Photo courtesy of Rebekah Coleman)

WASHINGTON — Two years ago, Brandon Coleman was placed on paid leave from his job with the Department of Veterans Affairs as an addiction therapist after he reported poor care for mental-health patients at the Phoenix VA hospital — the epicenter of the agency’s wait-time scandal.

After reporting his concerns, managers opened internal investigations into Coleman and accused him of misconduct, he said. Coleman claimed it was retaliation and he spent 18 months on leave while settling the dispute with the VA.

Now, Coleman, 42, is about to take a new position with the VA in which he can influence how whistleblowers are treated within the agency. He’s been assigned to VA headquarters to work on behalf of whistleblowers who still face deterrents to speak out, like he did.

Coleman reports to Washington, D.C. in mid-August, where he’ll be part of the new VA Office of Accountability and Whistleblower Protection, which is led by Navy and Air Force veteran Peter O’Rourke. The office was established with the intention of making VA officials more aggressive in finding and removing bad workers and protecting the whistleblowers who help them do it.

The new office was afforded some authority in June, when Congress passed legislation empowering the VA to fire bad workers. Also with the new law, supervisors will be evaluated on their ability to protect whistleblowers from retaliation. It all falls in line with President Donald Trump’s campaign message to root out a perceived culture of corruption in the department.

The office is in its early stages of development, Coleman said. Right now, O’Rourke is building a team, and he hired Coleman to serve as a bridge between whistleblowers and VA officials.

Coleman is being encouraged by his new bosses to speak out about how whistleblowers are treated by the VA.

Trump created the office with an executive order April 27, and Coleman stood behind him in VA headquarters as the president signed it.

At the time, Coleman was forthright about his thoughts on the endeavor. He said the office was “not going to have any teeth.”

“In April, this meant nothing. It was nothing more than a dog-and-pony show until they brought whistleblowers to the table,” he said. “And now they’ve done that.”

Speaking out in Phoenix In December 2014, Coleman reported patients, potentially suicidal or homicidal ones, were not well-monitored in an understaffed emergency room at Phoenix’s Carl T. Hayden VA Medical Center.

Coleman had lost his sixth patient to suicide in September 2014. When he saw another mental-health patient wandering the emergency room without getting help that October, he started gathering information.

It was a “60 Minutes” interview with former VA Secretary Bob McDonald in November 2014 that prompted Coleman to speak out. In the interview, McDonald, who had just taken over a beleaguered agency in the middle of a nationwide scandal, said VA employees who reported problems would be protected. Coleman was encouraged by the promise of protection.

He faced retaliation immediately from his supervisors, he said, and was denied a promotion. There were attempts to fire him.

Coleman spent 461 days at home on paid leave before settling with the VA in May 2016. At that point, he was allowed to return to work at a VA clinic in Anthem, Ariz., not far from Phoenix. The details of the settlement are confidential, and it’s unclear whether anyone was punished for retaliation against Coleman.

‘It needs to be fixed’ While on leave, Coleman testified before Congress about retaliation against whistleblowers at the VA. He also worked during that time with the conservative group Concerned Veterans for America, which spread his message about VA leadership failures.

A former senior adviser for Concerned Veterans for America, Darin Selnick, was a member of Trump’s transition team and is now working as an adviser at the VA.

The group praised the VA for hiring Coleman, which marks another of CVA’s collaborators working inside the agency.

“[Coleman] is a friend of CVA and we are proud of his perseverance in the face of adversity. [Coleman’s] hire shows that Secretary [David] Shulkin is serious about ushering in a new era of accountability at the VA,” CVA Policy Director Dan Caldwell said in a statement. “Under the last administration, many whistleblowers like [Coleman] faced retaliation from their own government. VA leadership was more interested in sweeping things under the rug than facing the systemic problems that plagued the department.”

It is unclear whether Coleman’s work with the CVA was a factor in his being selected to work in the VA’s new office.

Sen. Chuck Grassley, R-Iowa, chairman of the Judiciary Committee, also applauded the hiring decision. Grassley sent letters to McDonald in April 2015 and February 2016 asking he step in to stop retaliation against Coleman.

“Coleman and whistleblowers like him are key to accountability and good government,” Grassley said in a statement. “They deserve a welcome mat, not retaliation. The administration is right to recognize what Coleman has to offer the VA as the agency tries to fix the ways it’s failed veterans and taxpayers.”

Once his case with the VA was settled and he could return to work, Coleman kept with the VA, he said, because he wanted to ‘win’ — for himself, and for his three children who now serve in the Marine Corps.