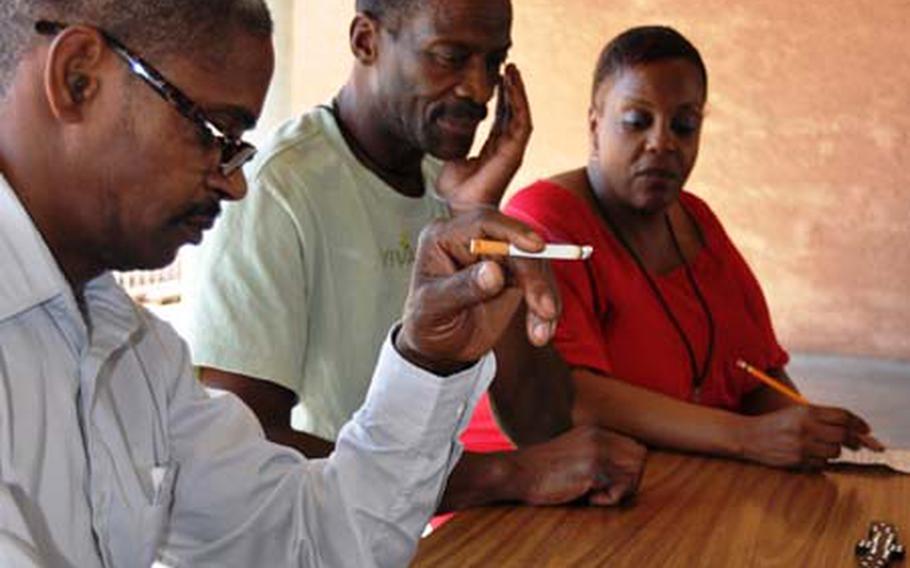 Homeless veterans in Las Vegas, who are working with U.S. Vets to get back on their feet, play dominoes in the shade of a parking garage in September. (Megan McCloskey / S&S)

WASHINGTON &#8212; Veterans Affairs Secretary Eric Shinseki said he learned long ago never to speak in absolutes, but on Tuesday he unveiled a bold new strategy to get every homeless veteran off the streets within five years.

&#8220;When I say a goal of zero homeless veterans in five years, it sure sounds like an absolute,&#8221; Shinseki said at the start of a three-day gathering of service providers fighting homelessness. &#8220;But I do that with an understanding that unless we set ambitious targets for ourselves we would not, we all would not be giving this our best efforts. No one who has served this nation as veterans have should be living on the streets.&#8221;

There are more than 130,000 homeless veterans, Shinseki said, and without a change to the status quo, the number could increase 10 to 15 percent in the next five years.

The plan is more a call to action, an acknowledgement that the next five years are crucial in turning the tide on veteran homelessness, particularly with the increasing number of Iraq and Afghanistan veterans showing up on the streets.

The VA is still crafting the details of how to reach the lofty goals, but the plan involves a complete overhaul of the department&#8217;s traditional framework, shifting to a focus on prevention and housing instead of on shelter services.

The five-year plan calls for more collaboration than the VA has been known for in the past, including renewing relationships with private, state and local service providers with whom the VA &#8220;has not maintained close links,&#8221; Shinseki said.

&#8220;We must attack the entire downward spiral that ends in homelessness,&#8221; Shinseki said, placing blame on substance abuse, depression and mental health issues.

The VA has increased funding for homelessness by 23 percent over last year, budgeting $3.2 billion. Of that, $2.7 billion goes to medical care and $500 million on specific homeless programs.

Still, Shinseki recognizes that &#8220;more is not necessarily better. Better is better.&#8221;

Dealing with homelessness head-on is a relatively new endeavor for the VA, which started its first program in 1987, years after Vietnam veterans started showing up en masse on the streets.

&#8220;The VA has a lot of services it can bring to the task, but it has not in recent history been very focused on housing. And homelessness is defined by housing,&#8221; said Nan Roman, director of National Alliance to End Homelessness.

Dennis Culhane, head of the VA&#8217;s National Center for Homelessness Among Veterans, said instead of focusing on temporary shelter, the new framework would put stable housing at the center of all program goals.

The five-year goal is not as far fetched as might seem. England has had great success using a prevention model, decreasing homelessness by 50 percent in three years from 2003 to 2006, Culhane said.

The keys to that success were flexible resources that could be tailored to the individual, strong agency collaborations and early intervention, according to Culhane.

But grand plans to end homelessness in the U.S. aren&#8217;t new. In 2000, coalition of homeless organizations declared a plan to end homelessness nationwide in 10 yearsm, Roman said, but nine years later there hasn&#8217;t been much progress in terms of actual numbers.

Stars and Stripes reporter David Hodge contributed to this report.