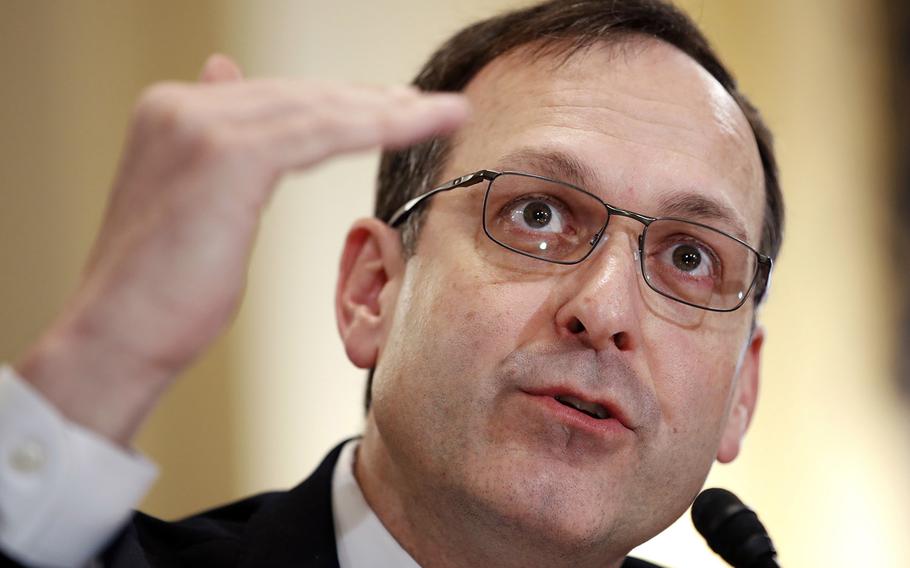 WASHINGTON — Peter O’Rourke, who became embroiled in multiple controversies during his short time as acting secretary of the Department of Veterans Affairs, will stay on as a senior adviser to new VA Secretary Robert Wilkie, the VA announced Monday.

Wilkie, sworn into the job two weeks ago, listed several changes he’s made to his leadership team. O’Rourke will maintain a top position at the VA, bucking rumors that Wilkie would reassign him to a less visible role.

“Our veterans deserve the best, and that is what we are doing by bringing together a talented leadership team to serve them at VA,” Wilkie said in the prepared statement.

During his two months as acting secretary, O’Rourke engaged in a public feud with the VA inspector general and was accused of lying during a congressional hearing. In addition, Democrats in the Senate asked for an investigation of O’Rourke following news reports that he was purging employees who were perceived as disloyal to President Donald Trump.

O’Rourke, a former Trump campaign staffer, has been with the VA for a year and a half. He was assigned as a senior adviser to former VA Secretary David Shulkin after Trump’s inauguration. O’Rourke was then chosen to lead the new Office of Accountability and Whistleblower Protection, which has recently come under scrutiny after allegations that it’s being used to retaliate against whistleblowers and target low-level employees.

In February, O’Rourke was tapped to take over as VA chief of staff. He started his two-month stint as acting VA secretary in May.

A Washington Post report in July casted doubt on O’Rourke’s future at the agency. It suggested O’Rourke and his leadership team would be sidelined.

ProPublica, a nonprofit news agency, reported last week that a trio of wealthy members of Trump’s private club in Palm Beach, Fla., are effectively running the VA in secret. According to the report, O’Rourke gained their approval.

Other leadership positions that Wilkie announced Monday were the VA chief of staff, deputy chief of staff and acting assistant secretary for human resources and administration.

Wilkie previously worked at the Pentagon as the undersecretary of defense for personnel and readiness. He’s bringing over a staff member from that position, retired Air Force Col. Pamela Powers, to serve as VA chief of staff.

Jacquelyn Hayes-Byrd was named as the acting assistant secretary for human resources and administration. She formerly held the position of VA deputy chief of staff, and for about two months, she’s been working as acting VA chief of staff.

According to the VA’s statement, the leadership changes will take effect shortly.

“These leadership changes will build upon a strong current team that will continue to carry out the priorities of President Trump and newly appointed Secretary of Veterans Affairs Robert Wilkie,” the statement reads.