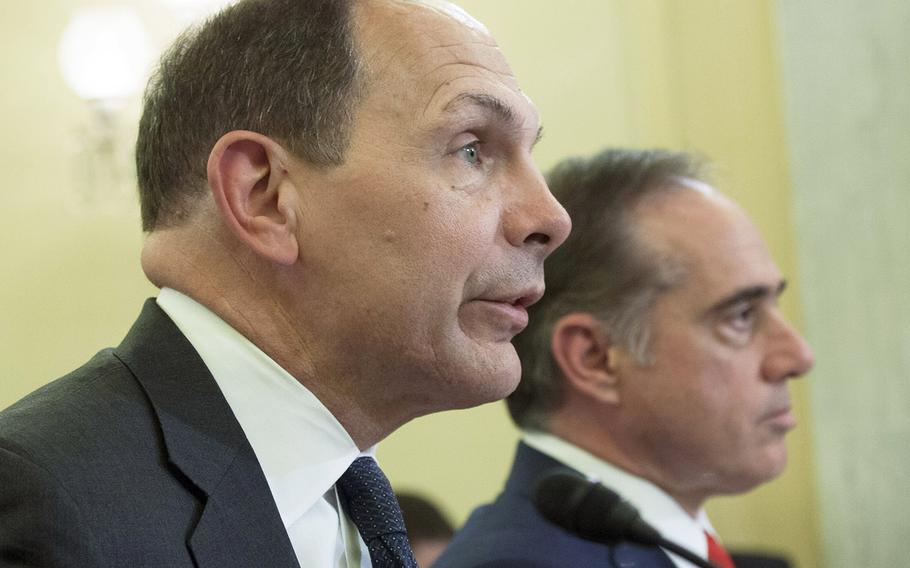 VA Secretary Bob McDonald testifies at a Senate Veterans' Affairs Committee hearing on the Commission on Care Report, Sept. 14, 2016, on Capitol Hill. Next to him is Under Secretary for Health Dr. David J. Shulkin. Large veterans groups have applauded the progress the VA has made since the appointment of McDonald. . (Joe Gromelski/Stars and Stripes)

WASHINGTON — The secretary of the Department of Veterans Affairs on Wednesday pushed back against new recommendations on private health care and blasted “ideologues” and corporate interests for trying to privatize the veteran medical system.

Secretary Bob McDonald urged a Senate committee weighing the VA reforms to instead keep the agency firmly in control of when and how veterans receive private care, and to support its own $17-billion plan to manage outside doctor and hospital visits.

Congress is considering a new $65-$85 billion integrated public-private VA health care system recommended in July by the Commission on Care, a special review panel created after the 2014 VA wait-time scandal to overhaul the troubled agency and improve veteran access.

“Let’s face it, privatization would put more money into the pockets of people running health care corporations,” McDonald said in testimony to the Senate Veterans Affairs Committee. “It’s in their interest, so of course it makes sense to them, even if it’s not what veterans need or want.”

McDonald continued: “Then there’s the ideologues” who deal with the privatization issue only in the “simplest, laziest, theoretical terms. Government bad, private sector good. That’s as far as the thinking goes.”

The Senate Committee on Veterans’ Affairs invited McDonald and David Shulkin, the VA undersecretary for health, to testify on the Commission on Care report.

The VA pitched its own plan to Congress in October to consolidate its patchwork of public-private health care networks but it has failed to gain traction in Congress.

McDonald and Shulkin criticized the panel’s plan, which calls for a “high-performing, integrated community health care network” called the VHA Care System to be created.

Shulkin claimed the recommendation to overhaul private care would be overly expensive.

“On the cost side, this would be in my view irresponsible just to turn people out with no deductibles and no cost control mechanisms,” he said. “This would be returning us to late ’80s, early ’90s where there was just runaway costs.”

The VA already spends $13.5 billion each year on private health care, which includes the Choice program. That multibillion dollar emergency measure was passed in 2014 after VA employees hid long waits for care and allows veterans to go to outside providers if they cannot get an appointment within 30 days or live too far away.

“We think that is the best use of money for taxpayers, that it actually is an efficient plan,” Shulkin said. “The Commission on Care’s plan was far more expensive than that.”

The Senate veteran committee and its counterpart in the House are working through the Commission on Care report, which includes a raft of reform proposals, and will decide whether to move ahead with new legislation.

A heated debate over giving veterans greater access to private health care — and possible privatization of the VA — has broken out this year, including the race for the White House. Hillary Clinton accused Donald Trump this month of angling to privatize the nationwide system of federal hospitals and clinics serving nearly 9 million beneficiaries.

The Commission on Care recommendation would retain a strong public role in veteran health care. Other recent proposals in Congress have swung further toward private control, such as a veteran insurance card suggested by Sen. John McCain, R-Ariz., and a draft House bill that would turn the VA into a not-for-profit corporation.

But veteran groups are strongly opposed to privatization. Many of them want the VA to remain in control of coordinating veteran access to private hospitals and doctors.

Lawmakers have also gotten the message.

But Tillis, who sits on the Senate Committee on Veterans’ Affairs, said he does believe the VA could work more with private health care providers, a position that tracks closely with veteran groups.