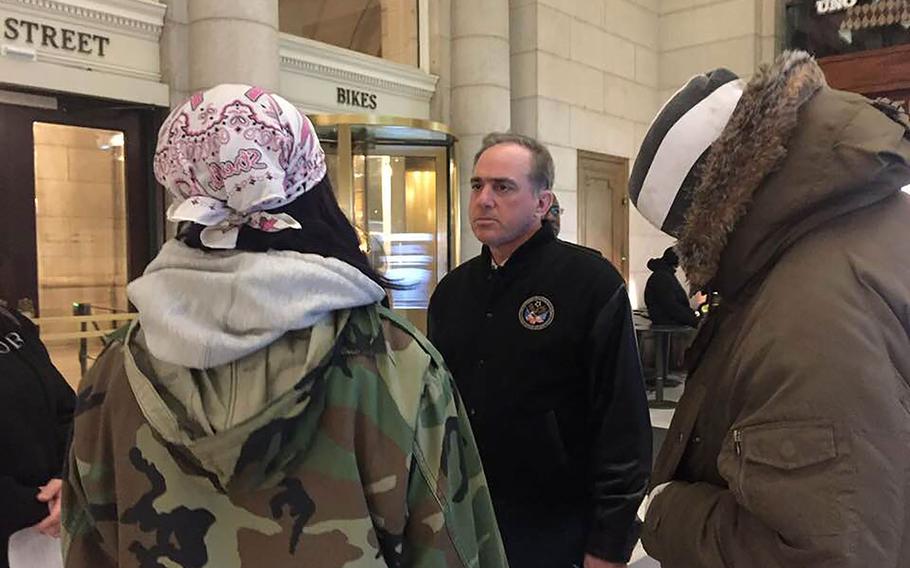 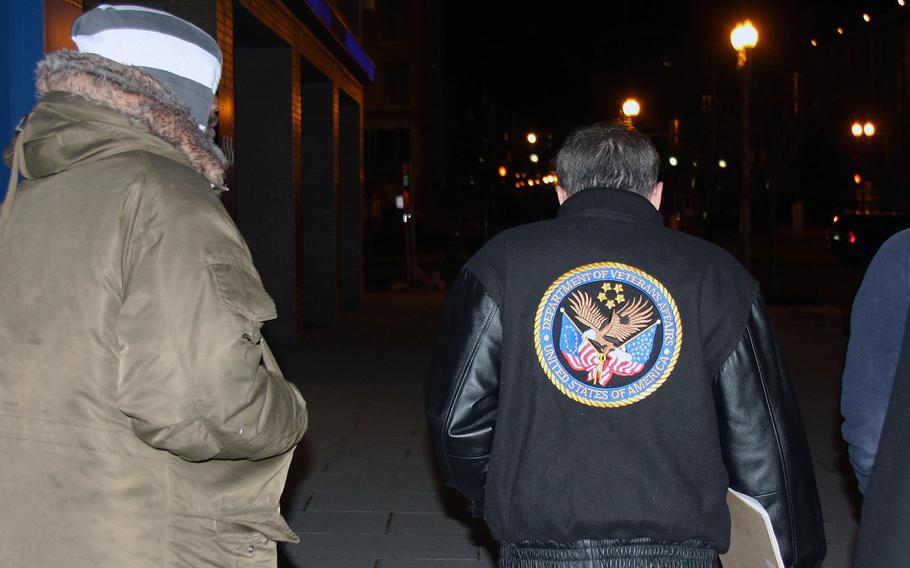 Buy Photo
Department of Veterans Affairs Secretary David Shulkin, right, follows a man to his friend, whom he said was a veteran living outside near Union Station in Washington, D.C. Shulkin participated in the annual point-in-time count of the country's homeless on Wednesday, Jan. 25, 2018. (Nikki Wentling/Stars and Stripes)

WASHINGTON — For Department of Veterans Affairs Secretary David Shulkin, practicing medicine gives him a better understanding about the health care needs of the veterans he serves. On Wednesday, he tried that same hands-on approach for another daunting problem facing the VA -- veteran homelessness.

Along with several other federal employees, Shulkin on Wednesday night gathered demographic information from homeless people in and around Union Station in Washington, D.C., looking in particular for homeless veterans. It was part of a nationwide, one-night count of sheltered and unsheltered homeless people across the country conducted by the Department of Housing and Urban Development. Shulkin participated in the count once before in Los Angeles, when he was the VA’s undersecretary of health.

Of the 553,742 homeless counted in the United States last year, 9 percent of them were veterans.

“When I see patients, it helps me understand how they’re experiencing the VA, and the same thing applies here,” Shulkin said. “When you’re out and you speak to people, you understand what they’re thinking and if they know what some of the resources are. If you’re sitting in your office saying, ‘I know what’s best for homeless people,’ and you’ve never spoken to one, you might get it wrong.”

Starting about 10 p.m., Shulkin, surrounded by a security detail, began talking to people taking shelter inside Union Station from near-freezing temperatures. There were about a dozen people in the main hall of Union Station when the count started. Washington implements an emergency plan for cold weather, offering more access to emergency shelters and overnight warming sites when temperatures drop. City workers picked up some people at Union Station and transported them to shelters before the count began.

Clipboard in hand, Shulkin talked to homeless people still at the station, taking down their names, ages, race and income information. He also asked about their housing situation and health conditions – whatever they were willing to tell him.

“They can use it locally to plan the populations they need to focus on more and really see what the changes are in a greater level of detail,” said Matthew Doherty, executive director of the U.S. Interagency Council on Homelessness. “We survey them about whatever information they’re willing to talk about, including capturing whether they served in the military.”

Chasu Ardell Koker, an Army veteran in her 30s, was keeping warm in Union Station on Wednesday night. When Shulkin approached her, Koker told him she had recently been evicted, her belongings dumped on a sidewalk.

Shulkin and a federal employee who was also volunteering took down Koker’s information and called Chesapeake Health Educational Program, Inc., or CHEP, a nonprofit located in D.C., Maryland and South Carolina that offers transitional housing for homeless veterans.

About 15 minutes later, Koker and Shulkin were talking outside Union Station when the CHEP van pulled up. Before Koker got inside, she fist-bumped Shulkin and said a quick, “Thank you.”

At one point during the night, a homeless man questioned Shulkin about why there were so many homeless veterans and why they weren’t receiving help.

Last January, volunteers across the country counted 40,056 veterans living on the streets or in transitional housing and shelters – 585 more than in 2016.

The man, who found housing through a social worker earlier that night, wasn’t a veteran, he said. But his friend Chuck was, and he was living outside.

Leading his security detail, another VA official and deputy press secretary, Shulkin followed the man on a mile-long walk, crossing in the middle of streets and talking with the man about his friend Chuck.

After searching sidewalks and hideaways along several blocks near Union Station for about half an hour, the group gave up. Shulkin gave the man a couple of Subway gift cards and told him to pass along a message: “Tell him to come by the VA,” he said.

“Listen, it was great, him trying to get one more veteran housed,” Shulkin said. “He wanted to do good.”

Shulkin’s group gathered information from about 10 people before finishing at about midnight. Some volunteers across the country stayed out overnight, attempting to get as accurate a count as possible.

Cities will collect and release the data from the point-in-time count as soon as possible, Doherty said, and then send it to HUD. The agency will compile a national report, which is usually released every fall. HUD released information from last year’s point-in-time count in November.

Overall, veteran homelessness increased by 2 percent in 2017, and the increase for women veterans was greater, at 7 percent.

The last year-to-year increase was in 2010, followed by six years of gradual decline. Since 2009, there has been a 45 percent decrease in the number of homeless veterans.

When testifying before a Senate committee last week, Shulkin said the VA needed a “reboot of our program” and promised a “new, improved approach” to combating veteran homelessness. He wants to specifically target Los Angeles and Seattle, where veteran homelessness has increased the most, and pledged to increase – not decrease — resources. He reassured senators that he would keep Congress informed and work with stakeholders to make changes as needed.

Advocates are looking for those promises to be backed up by Shulkin’s future budget proposals.

There’s recently been unease among nonprofits that focus on homeless veterans since it was discovered last fall that Shulkin wanted to reallocate $460 million specifically designated for the Housing and Urban Development-Veterans Affairs Supportive Housing program. Through the program, the VA provides case management for veterans who receive housing vouchers from HUD. Outcry from advocates and lawmakers led Shulkin to quickly reverse the decision.

“It seems to us there is no longer an emphasis and determination to get every veteran off the streets,” Stephen Peck, president of U.S. VETS, told lawmakers earlier this month. “This is no time to be taking our eye off the ball.”

Shulkin later said his intent was to move funding into a general-purpose account to provide more flexibility for local leaders to decide how to tackle veteran homelessness in their specific geographical area. He’s since acknowledged to lawmakers that he should’ve made advocates and Congress part of the decision process, and he’s attempted to relieve doubts that he would keep the pressure on.

“If we stopped doing what we’re doing, the number [of homeless veterans] would grow really rapidly,” Shulkin said. “We don’t think that any veteran should be without a home, so that’s what we’re doing out here.”