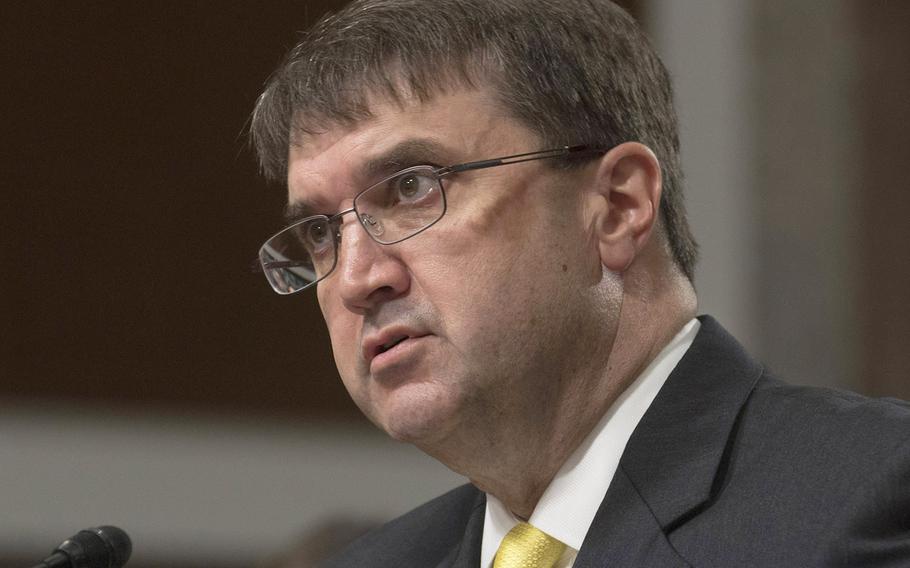 WASHINGTON – Robert Wilkie, the latest choice by President Donald Trump to lead the Department of Veterans Affairs, was easily approved Tuesday by the Senate Veterans’ Affairs Committee, moving his nomination to a vote by the full Senate.

The VA committee advanced Wilkie’s nomination with a voice vote Tuesday afternoon. Sen. Bernie Sanders, I-Vt., was the only committee member to vote against the nomination.

The vote moves Wilkie a step closer to leading the second-largest agency in the federal government, which has been without a full-time leader for nearly four months.

“Mr. Wilkie has the expertise and the positive attitude to take on challenges that lie ahead, and he will prove indispensable in helping transform the VA,” Sen. Johnny Isakson, R-Ga., said after the vote. “Today’s committee vote signals the broad, bipartisan support that I hope we can look forward to in his confirmation by the full Senate.”

Wilkie, 55, works as the Defense Department undersecretary of personnel and readiness. He’s considered a safe choice for the job, given his decades of experience working on military policymaking on Capitol Hill and at the Pentagon and White House.

White House Press Secretary Sarah Huckabee Sanders said in a statement that Wilkie had “stellar qualifications” for the job and asked the Senate to confirm him as soon as possible. It was uncertain Tuesday when a confirmation vote might be scheduled in the Senate.

After a confirmation hearing June 27, most senators on the VA committee seemed willing to approve his nomination despite a Washington Post report that criticized him for embracing and defending divisive cultural issues. Isakson, the committee chairman, and Sen. Jon Tester, D-Mont., the ranking Democrat on the committee, issued their official support for Wilkie on June 28.

“Mr. Wilkie is committed to putting veterans first, and I’m pleased to support him,” Tester said in a statement at the time. “The VA is navigating rough waters, and I will hold Mr. Wilkie accountable for serving our veterans.”

The VA – with more than 375,000 employees and a nearly $200 billion budget – has experienced a flux in leadership at a time of major change.

Congress recently passed the VA Mission Act, a $52 billion package of reforms that need to be carried out during the next year. The agency is also implementing changes to veterans’ education benefits and working on a multibillion-dollar project to overhaul its electronic health record.

In March, Trump fired former VA Secretary David Shulkin. Wilkie led the VA as acting secretary for two months until he was officially nominated for the position on a full-time basis. Since May, Peter O’Rourke has served as acting secretary.

Since Shulkin was fired, Deputy Secretary Tom Bowman retired and several health officials left the VA, as did the agency’s chief information officer. No one has been nominated yet to lead the VA’s vast health care system.

Adding to the strife, Rear Adm. Ronny Jackson, a White House physician and Trump’s previous nominee for secretary, was pressured to withdraw after facing allegations of drinking on the job and doling out controlled substances. He’s now under investigation by the Defense Department Office of Inspector General.

Since the VA became a Cabinet-level department in 1989, there have been nine secretaries. All of them were unanimously approved by the Senate, meaning no senator has ever voted against a VA secretary nominee. With Sanders’ vote against Wilkie on Tuesday, it appeared that pattern could change.

In response, Wilkie said he believes the VA should be central to veterans’ health care.