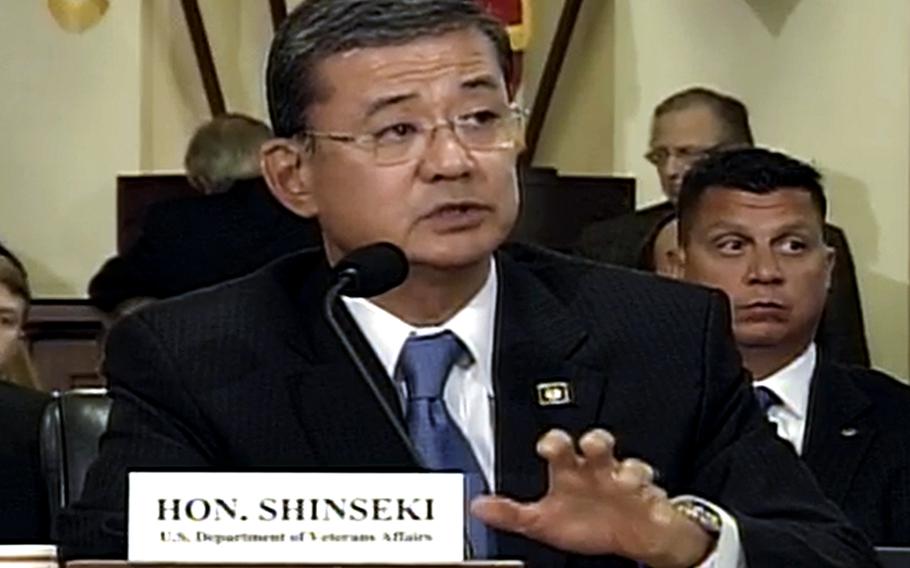 WASHINGTON — The government shutdown has been painful, Veterans Affairs Secretary Eric Shinseki said, but the worst is yet to come.

On Nov. 1, if the ongoing budget battle isn’t resolved, the department won’t be able to send out benefits checks to nearly 5.2 million veterans and family members, Shinseki told members of the House Veterans Affairs Committee on Wednesday. Veterans depending on disability benefits, living stipends and tuition payments will all be affected.

The claims backlog has already jumped sharply in the first full week since the shutdown — up about 2,000 cases, after a steady six-month downward trend — and the problem will only worsen.

And thousands of VA employees face furloughs as funding dries up, which will restrict program offerings for the department.

“All of the effects of the shutdown are negative,” Shinseki told lawmakers. “We’re asking (Congress) to help us get back to work full-time.”

Lawmakers appear no closer to that. Negotiations on a budget fix have stalled since the start of the month, as Republicans and Democrats argue whether to include changes to the Affordable Care Act and deficit reduction proposals in a measure to fund government operations.

Committee Chairman Rep. Jeff Miller, R-Fla., acknowledged that “there is plenty of blame to go around as to why we’re in this position,” but also chastised the VA for providing incomplete and sometimes confusing information over the effects of the shutdown on veterans.

He also criticized VA for failing to lobby the Senate to pass a House-backed appropriations bill that would have fully funded the department a year in advance, regardless of shutdown threats. Department officials have not offered support for the measure.

“I know that VA employees do not work solely for a paycheck,” he said. “They work because they believe in helping veterans. You have done your job, now it is time for Congress to do its job.”

Earlier this week, the department furloughed about 10,500 more employees, all of whom are involved with benefits work and information technology projects.

In September, officials initially indicated the impact of a government shutdown could be minimal on department operations, since much of the department’s health care is funded a full year in advance.

But department leaders warned that if the shutdown stretched into late October, the consequences would quickly worsen. More than $6 billion in benefits checks are due at the start of next month, many to families in financial distress because of lingering military injuries.

Shinseki could not give a precise date when VA appropriations accounts would run out. But he noted that unless the situation is resolved soon, “I will not be sending checks out.”

In addition, lawmakers noted that veterans make up about 30 percent of the federal workforce, many of whom are facing paycheck uncertainty because of the budget fight.

The VA secretary said he did not support a piecemeal fix to the budget impasse, dismissing a bill passed by the House last week to restore his department’s funding without ending the shutdown. The measure has stalled in the Senate, after Democratic leaders there labeled it little more than a political stunt which distracts from real compromise.

Shinseki said that his department’s work depends on coordination with a host of government agencies, so simply funding one part of government won’t fully restore operations.

Along with the ongoing shutdown problem, Congress also faces a decision on increasing the nation’s debt ceiling next week.