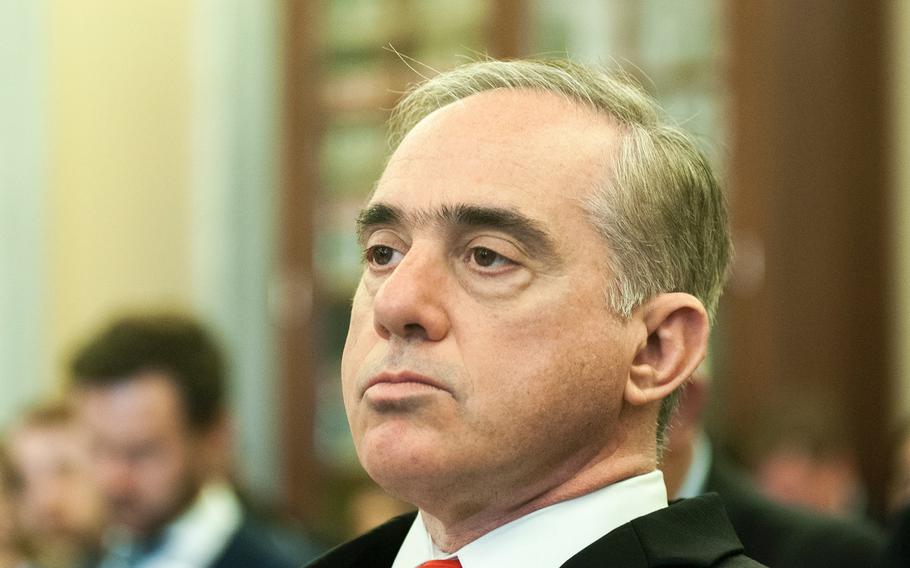 WASHINGTON — The Department of Veterans Affairs made moves Friday to publicize Secretary David Shulkin’s travel schedule, following scrutiny over the cost of government-funded travel by other Cabinet members.

The VA announced it will post Shulkin’s itineraries of international and domestic trips, as well as who accompanies him and whether he uses private or government aircraft. On Friday, the information was online at the VA’s new “Secretary’s Travel” page.

“Veterans and taxpayers have a right to know about my official travel as secretary, and posting this information online for all to see will do just that,” Shulkin said in a prepared statement.

The announcement came two days after the House Oversight Committee initiated an investigation into the travel of President Donald Trump’s administration.

Rep. Trey Gowdy, R-S.C., and Rep. Elijah Cummings, D-Md., leaders of the committee, sent letters Wednesday to the White House and 24 federal agencies, including the VA, asking for senior officials’ travel details. The lawmakers cited federal law that official travel should be “expeditious” and “by no means should include personal use.”

Gowdy and Cummings requested responses from each agency by 5 p.m. on Oct. 10.

In August, Treasury Secretary Steve Mnuchin used military aircraft to fly from New York City to Washington, D.C., costing about $25,000, ABC News reported. The Treasury’s Office of Inspector General is reviewing another of Mnuchin’s trips, in which he used government aircraft to fly to Kentucky, where he spoke to business leaders and viewed the solar eclipse.

According to several reports, Mnuchin also requested to use a military jet to fly him and his wife, Louise Linton, to their European honeymoon. The request was later withdrawn.

Another cabinet member, Health and Human Services Secretary Tom Price, promised Thursday to repay about $52,000 for his travel on private charter planes, which costs thousands of dollars more than commercial flights.

As of Friday afternoon, the VA posted Shulkin had taken five trips on Air Force 1 and Air Force 2, two of them to Texas to see damage caused by Hurricane Harvey. He also used a military aircraft last week for a trip to the Invictus Games in Toronto with First Lady Melania Trump. Shulkin has not used any private aircraft for official travel, according to information on the VA website.

According to one itinerary posted on the VA website Friday, Shulkin, his wife, Merle Bari, and other VA officials traveled July 11 to Denmark, where Shulkin was briefed on the Danish health care system for veterans, toured a veterans home and met the Danish ministers of defense and health. The group then traveled to London, where Shulkin and Bari spent July 15 at the Wimbledon tennis tournament with friends. On July 16, they visited Buckingham Palace, Kensington Palace, Westminster Abbey and took a cruise of the Thames River, followed by an evening in Piccadilly Circus. Later during the week, Shulkin attended a conference in London on veterans issues.

The VA said it would update the site five days after the conclusion of every trip. The agency tied the move to other attempts at transparency since Shulkin took over as secretary. In July, the VA made public a list of employee terminations, demotions and suspensions, which is updated weekly.