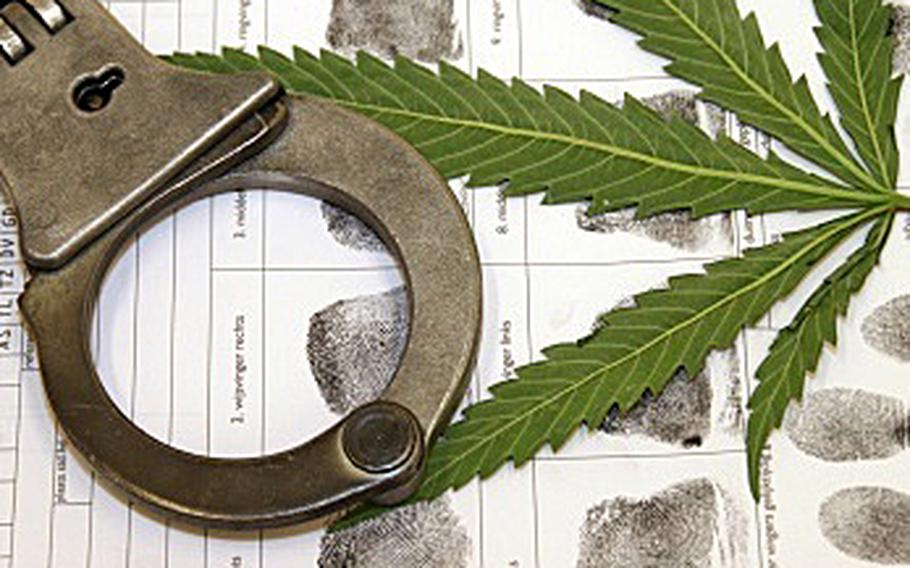 Marijuana, along with nine other substances, is specifically prohibited under Article 112a of the Uniform Code of Military Justice and penalties for its use can range from a general discharge to dishonorable discharge (for positive results of a urinalysis) and even imprisonment for possession. (Defense Department)

Marijuana, along with nine other substances, is specifically prohibited under Article 112a of the Uniform Code of Military Justice and penalties for its use can range from a general discharge to dishonorable discharge (for positive results of a urinalysis) and even imprisonment for possession. (Defense Department) 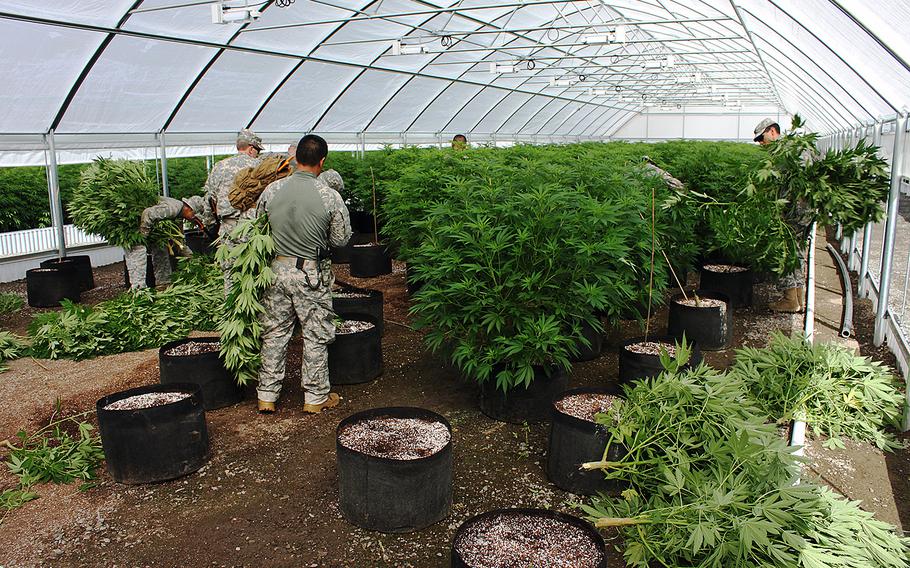 WASHINGTON — A proposal allowing doctors at the Department of Veterans Affairs to prescribe medical marijuana to veterans appeared close to becoming law until Congress removed it this week from the agency’s annual budget bill at the last moment.

The legislation, sponsored by Oregon lawmakers, had cleared prior votes in the House and Senate but was nixed late Wednesday night during final closed-door negotiations on the VA bill. It would have lifted a prohibition on the VA recommending the drug to patients in states where it is legal.

The move was a blow to advocates of medical pot who have been trying to get the measure through a divided Congress and lowers the chances that a law might be passed this year.

“It’s outrageous that it was removed” from the annual VA budget bill, Rep. Earl Blumenauer and Sen. Jeff Merkley, both Democrats from Oregon, said in a joint statement Friday. “To add insult to injury, the legislation was released in the middle of the night, not even giving members of the House an opportunity to review the language before voting on it.”

The budget bill for the VA and military construction was approved by a joint conference committee of lawmakers, which stripped the pot measure, and then it was immediately passed overnight Wednesday by the House as attention was on Democrats, who staged a sit-in on the chamber floor in an attempt to force votes on gun control.

The Senate is expected to consider the massive VA bill on Tuesday in what could be a final vote sending it to President Barack Obama’s desk. But Democrats were rallying in opposition due to unrelated legislation dealing with the Zika virus and Planned Parenthood funding.

Blumenauer and Merkley said the marijuana legislation had broad bipartisan support before it was removed.

“This isn’t right for our veterans, or the American people,” they said.

It is not unusual for conference committees, which are now controlled by the Republican majority, to change or remove language during final bill negotiations, though the practice can anger lawmakers.

Blumenauer has argued VA rules prohibiting doctors from referring veterans to state-regulated medical marijuana programs are forcing those veterans out of the VA system to treat certain medical conditions.

The VA has said its hands are tied because the federal government considers marijuana an illegal drug, despite state-level decriminalization and legalization.

Medical marijuana has been approved by 23 states and the District of Columbia. The Obama administration has dropped federal opposition to the laws.

Pot is used to treatment of glaucoma, cancer, HIV and other health conditions. Veterans are also looking at it to treat post-traumatic stress disorder, which might affect about 20 percent of the 1.8 million servicemembers deployed to the wars in Iraq and Afghanistan, according to the National Center for PTSD.

The VA does offer pain management and substance abuse programs to veterans involved in state medical marijuana programs. However, veterans who smoke pot for a medical condition might be recommended drug abuse treatment.