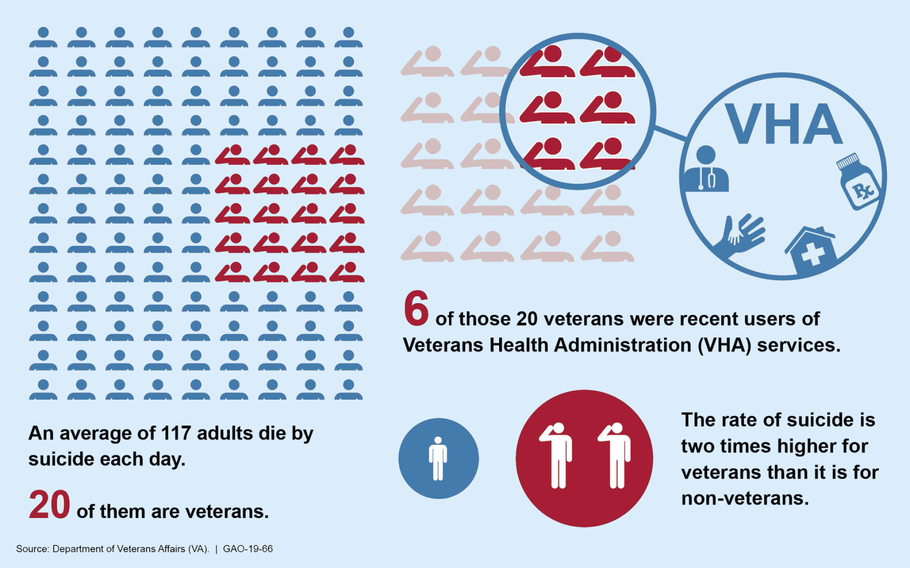 WASHINGTON — A federal investigation found the money and effort expended by the Department of Veterans Affairs on suicide prevention outreach dropped significantly in 2017 and 2018, despite it being touted by the past two VA secretaries as their top clinical priority.

Following a yearlong investigation, the Government Accountability Office reported Monday that the VA has cut back since 2016 on suicide prevention outreach. Of the $6.2 million budget obligated for suicide prevention outreach in fiscal year 2018, the agency had spent only $57,000, or less than 1 percent, by September. Agency officials told investigators they would end up spending a total $1.5 million by Oct. 1, the end of the fiscal year. The remainder, $4.7 million, went unused.

The number of social media posts, public service announcements, billboards, and radio, bus, Facebook and print advertisements declined in 2017 and 2018, as did the effort on suicide prevention month.

Suicide among veterans is disproportionately higher than the rest of the U.S. population, with an estimated 20 veterans dying by suicide each day, according to VA data. Among veterans younger than 35, the number of suicides has increased substantially in recent years.

Rep. Tim Walz, D-Minn., the ranking Democrat on the House Committee on Veterans’ Affairs, requested the GAO investigation. He said Monday that the findings conveyed “a deeply troubling level of incompetence” by President Donald Trump’s administration.

“At a time when 20 veterans a day still die by suicide, VA should be doing everything in its power to inform the public about the resources available to veterans in crisis,” he said in a statement. “Unfortunately, VA has failed to do that, despite claiming the elimination of veteran suicide as its highest clinical priority.”

The VA had increased its suicide prevention outreach efforts from 2013 to 2016.

Starting in June 2012, the VA consistently aired suicide preventions PSAs every month, either on the television or radio. When GAO investigators looked into the issue in August 2018, the VA hadn’t aired a PSA in over a year.

Comparatively, the VA used only a small portion of its budget in fiscal year 2018 to purchase 25 online ads, 20 billboards and eight radio advertisements.

The VA blamed leadership vacancies for the downturn.

The position of national director for suicide prevention was vacant for nine months following the resignation of the former director, Caitlin Thompson, in July 2017. The VA hired a new director, Keita Franklin, in April.

“Officials reported not having leadership available for a period of time to make decisions about the suicide prevention media outreach campaign,” the report states. “GAO found that [VA] did not assign key leadership responsibilities or establish clear lines of reporting, and as a result, its ability to oversee the outreach campaign was hindered. Consequently, [the VA] may not be maximizing its reach with suicide prevention media content to veterans, especially those who are at-risk.”

In a letter responding to the report, VA Secretary Robert Wilkie reasserted his commitment to suicide prevention outreach.

“Every death by suicide is a tragedy, and we will not relent in our efforts to connect veterans in need with lifesaving support,” the response reads.

VA officials acknowledged “organizational transitions and realignments” created confusion from mid-2017 to mid-2018, but they claimed there has since been significant improvements.