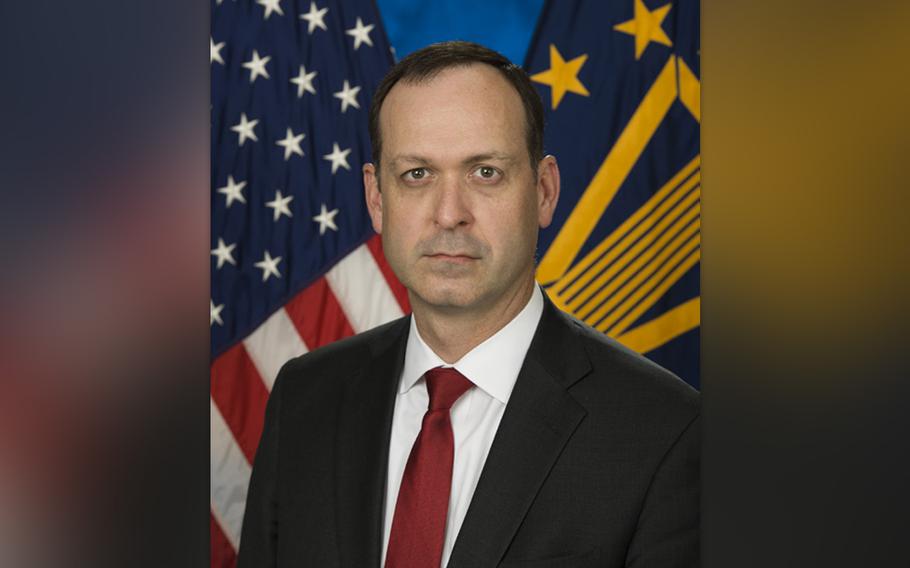 WASHINGTON — Robert Wilkie, who served as acting secretary of the Department of Veterans Affairs for two months and is the expected nominee for the full-time job, will step down from his temporary post during his Senate confirmation process, the VA announced Wednesday.

VA Chief of Staff Peter O’Rourke was chosen to lead the agency in the interim. Deputy Secretary Thomas Bowman, the second in command at the VA who was previously bypassed for the job of acting secretary, will retire effective June 15.

Bowman will continue to serve as a “consultant,” the VA said.

“Bowman will maintain his longstanding commitment to VA by providing valuable insight and experience as an expert consultant to the acting secretary,” a VA statement reads. “His VA experience spanned more than a decade, including assignment as chief of staff to two previous VA secretaries. Mr. Bowman looks forward to continuing his service to our nation’s veterans.”

Bowman took the job of deputy secretary in August after being confirmed by the Senate. He previously worked as the staff director for the Senate Veterans’ Affairs Committee. Before working in Congress, Bowman held leadership positions at the VA, including chief of staff. He was also a senior adviser to the director of VA health care in Florida and the Caribbean. He’s a retired Marine Corps colonel and earned degrees from the University of Texas and Western New England College.

President Donald Trump announced May 18 that he intended to nominate Wilkie as VA secretary. Wilkie, who most recently worked as undersecretary for personnel and readiness at the Department of Defense, led the VA since March 28, when Trump fired former Secretary David Shulkin. As of Wednesday, Wilkie returned to his job at the Defense Department.

In the days following Trump’s announcement, some veterans groups urged the White House to name Bowman as the new acting VA secretary while Wilkie underwent vetting to take the job permanently. They viewed it as a chance for consistent leadership at an agency that’s undergone significant turnover in recent months.

VoteVets, a left-leaning veterans group, and the Democracy Forward Foundation, a nonprofit legal organization, threatened legal action if Trump appointed someone other than Bowman to acting VA secretary while Wilkie awaits Senate confirmation.

The groups already had filed a lawsuit in April, accusing Trump of circumventing federal statutes when he picked Wilkie to lead the VA temporarily. Federal rules state a person cannot serve in an acting role for a Senate confirmable position unless the person previously served as assistant to that office for 90 days. VoteVets and the Democracy Forward Foundation claimed last week they would amend their lawsuit to reflect another violation of federal law if Bowman was passed over.

In a more amicable approach, AMVETS sent a letter to Trump last week asking that he pick Bowman as acting secretary.

“It is crucial for all veterans relying on the VA now and in the future that the agency continues moving forward in the right direction,” wrote AMVETS National Commander Marion Polk. “That will, of course, require another strong leader be appointed to serve as acting secretary until the new secretary is confirmed and sworn in.”

However, Bowman has been in a precarious position at the VA for months because of infighting that roiled the agency and led to Shulkin’s dismissal.

O’Rourke has recently risen through the ranks at the VA. He’s been with the agency for a little more than a year, holding three positions in that time.

O’Rourke, a Navy and Air Force veteran, was part of Trump’s presidential transition team. He was appointed as a special adviser to Shulkin in January 2017, and then was chosen to lead the Office of Accountability and Whistleblower Protection when it was created last summer. In that role, he advised Shulkin and other VA leaders on matters of employee discipline.

In February, O’Rourke was tapped to take over as VA chief of staff when former Chief of Staff Vivieca Wright Simpson suddenly retired. Her retirement followed findings from the VA inspector general that she misled an ethics official into approving expenses for Shulkin’s wife on a taxpayer-funded trip to Europe. At the time, news was emerging of internal strife at the agency between White House appointees and longtime civil servants.

It’s uncertain how long O’Rourke might serve as acting secretary.

As of Wednesday afternoon, Wilkie had not officially been nominated, and the Senate was waiting for paperwork from the White House before starting his confirmation process.

Jacquelyn Hayes-Byrd, the agency’s deputy chief of staff, will take over O’Rourke’s duties while he serves as acting secretary.