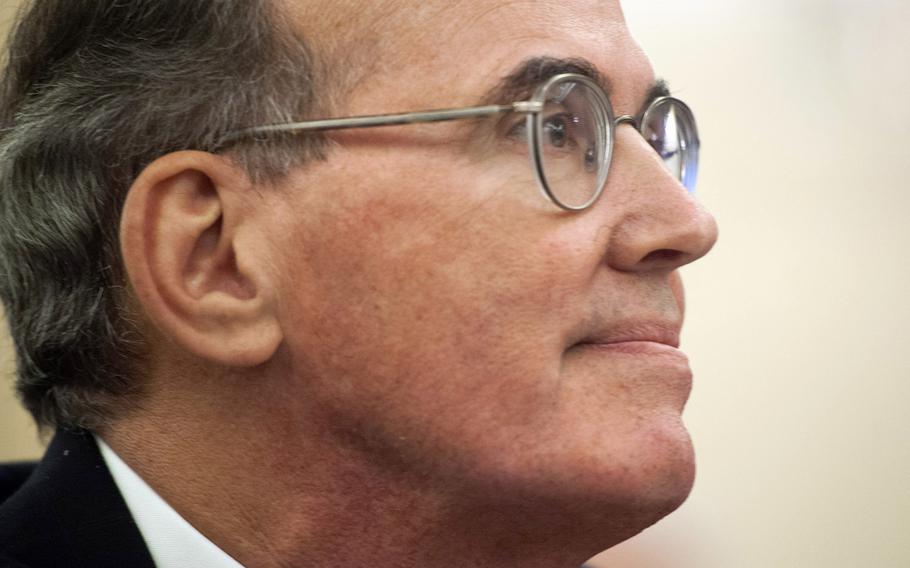 Michael J. Missal listens to opening statements at a Senate Veterans Affairs Committee hearing on his nomination as Inspector General of the Department of Veterans Affairs, Nov. 17, 2015, on Capitol Hill. (Joe Gromelski/Stars and Stripes)

WASHINGTON — President Barack Obama’s nominee for Department of Veterans Affairs inspector general told a Senate panel Tuesday that improving the treatment of whistleblowers in the agency will be a top goal if he is confirmed.

The last acting IG was ousted in July amid whistleblower complaints that he whitewashed widespread wrongdoing in the VA. But nominee Michael Missal, a managing attorney at the private K Street law firm K&L Gates in Washington, D.C., testified to the Senate Veterans Affairs Committee that he will ensure whistleblowers who come forward in the troubled agency will have their identities concealed and be protected from reprisal.

Despite some questions about his experience, committee lawmakers gave Missal a warm reception. Sen. Johnny Isakson, R-Ga., said the committee will vote soon on passing along his nomination to the full Senate chamber for a final confirmation decision.

“If confirmed, one of my goals will be to promote an improved environment in which whistleblowers have confidence that their concerns will be fairly and effectively considered by the Office of Inspector General and that their identities will be protected from disclosure,” Missal testified.

Missal would fill a key position at the VA that has not been permanently filled for about 18 months. The new IG will be faced with investigating an agency with a history of widespread data manipulation, management relocation schemes used to skirt rules on pay raises and massive construction cost overruns.

The man who last served as acting IG, Deputy Inspector General Richard Griffin, defiantly retired July 4 — a symbolic statement on the office’s independence — as a group of 40 whistleblowers were pressuring the White House to name a new permanent watchdog.

Some critics had accused Griffin of suppressing investigative reports, a charge he repeatedly denied.

“You have to have the integrity to stand up and say you won’t be influenced,” Missal said. “I take zero tolerance, I don’t even like the appearance of not being independent.”

It was Missal’s lack of experience as an inspector general and in health care that troubled some panel lawmakers.

Sen. Mike Rounds, R-S.D., said most people who serve as inspectors general for cabinet-level federal agencies almost always have served in such a job in the past.

He told lawmakers that his inspiration for working at the VA was his deceased father, who served in Europe with the Army 286th Engineer Combat Battalion during World War II.

But Rounds compared the VA to a swamp full of alligators and said Missal might not be able to clear it out with no experience as a government watchdog.

Sen. Bill Cassidy, R-La., who is a physician, said most of the VA’s work deals with its nationwide health care system — the center for much of its dysfunction — and that Missal also might be at a disadvantage because he does not have any background in that field.

But the Senate panel appeared set to approve Missal, moving him to the next stage of the nomination process.

“I think the quicker the better in confirmation of this young man,” said Sen. Jon Tester, D-Mont.