VA enlists harsh critics as it belatedly embraces the Web Buy Photo
From left, Josh Tuscher, Alex Horton, Brandon Friedman and Kate Hoit are the core of the team trying to reshape how the Department of Veterans Affairs communicates over the Internet. (Bill Murphy Jr./Stars and Stripes)

Buy Photo
From left, Josh Tuscher, Alex Horton, Brandon Friedman and Kate Hoit are the core of the team trying to reshape how the Department of Veterans Affairs communicates over the Internet. (Bill Murphy Jr./Stars and Stripes) 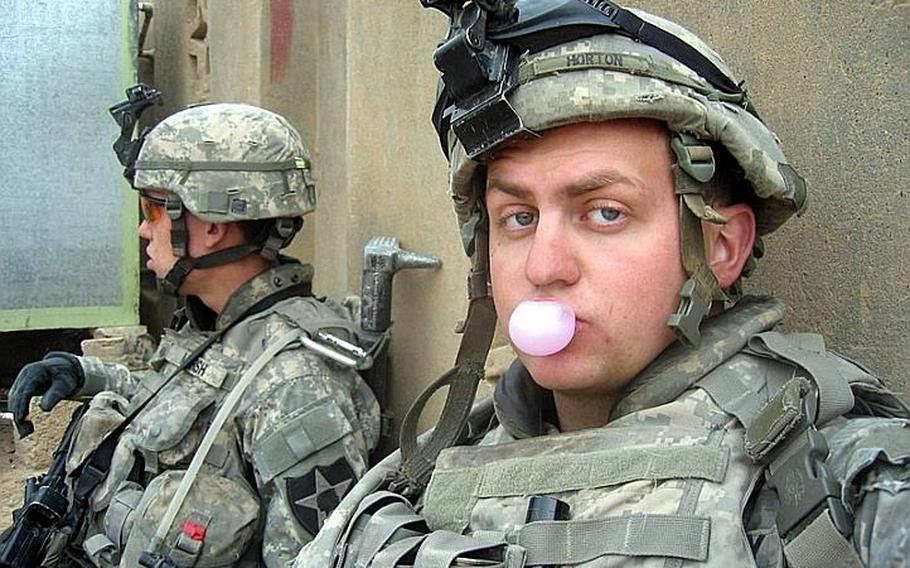 Alex Horton launched his blog, "Army of Dude," while serving in Iraq. His brutally honest observations helped land him a job blogging professionally for the Department of Veterans Affairs, which sought to change the way it interacts with veterans online. This photo was taken on March 24, 2007, during a violent mission in Baqouba in which two soldiers each lost a leg and several others were wounded. (Courtesy Alex Horton)

WASHINGTON &mdash; Alex Horton started his blog, &ldquo;Army of Dude,&rdquo; as a young enlisted infantryman in Iraq from 2006 to 2007. It was one soldier&rsquo;s view of war, graphic and often critical, penned at first for friends and family.

Over time, his audience grew, drawn by his especially literate and personal descriptions. After leaving the Army, he kept writing, in between community college classes and a part-time job wrangling grocery carts at Costco. So, when the government erroneously stalled his GI Bill benefits in 2009, and after officials struck him as indifferent, Horton did what seemed natural. He published a pair of thousand-word Internet rants about the Department of Veteran Affairs.

One VA employee displayed &ldquo;the same level of care you would expect from a Tijuana back alley vasectomy,&rdquo; Horton wrote. Other employees probably bought &ldquo;salt in bulk,&rdquo; as they seemed eager to pour it into veterans&rsquo; wounds.

&ldquo;With the advice of my VA counselor,&rdquo; Horton wrote, &ldquo;I bet it all on the Post-9/11 GI Bill. And I lost.&rdquo;

At least three things happened as a result of those blog posts.

First, Horton got in touch with Brandon Friedman, who had just started as the VA&rsquo;s first director of new media, and who put him in touch with the top VA official working on educational benefits.

Second, the government cleared up his GI Bill issue.

Third, Horton got a job offer &mdash; from the Department of Veteran Affairs.

Eighteen months after writing his heated words, Horton is now a professional blogger for the VA, working with Friedman and a small group of colleagues on the ninth floor of the agency&rsquo;s Washington headquarters. Their mission is to revolutionize how the VA interacts with veterans on the Internet, so that veterans can get information, and people with complaints like Horton had can get answers.

It&rsquo;s a difficult job. Two years ago, the VA had no official presence on any Internet social networks. The department&rsquo;s website was unappealing and cumbersome. Agency employees weren&rsquo;t even allowed to look at sites like Facebook or Twitter from their work computers. As a result, they were officially disconnected from the ongoing, online dialogue about their work.

That situation struck Tammy Duckworth, the assistant secretary for public and intergovernmental affairs, as untenable.

&ldquo;I had always been really frustrated with VA&rsquo;s web page before I got my appointment, and it was one of the things where, if I had any role in VA after the president was elected, I was going to do something,&rdquo; explained Duckworth, who lost both legs and partial use of one arm in a 2004 helicopter crash in Iraq. &ldquo;It drove me crazy, as somebody who was trying to work through the system myself.&rdquo;

So, Duckworth hired Friedman, a blogger, author and Army veteran of Iraq and Afghanistan, to turn things around. With a limited budget, Friedman borrowed the work of an employee in the VA&rsquo;s chief technology office, Lauren Bailey, and eventually recruited Horton, whom he'd first met in 2008.

More recently, two other Iraq vets have joined the team. Kate Hoit, is a former Army photojournalist who wrote a personal blog about her transition from soldier to civilian under the name &ldquo;GI Kate,&rdquo; started work at the end of January.

Josh Tuscher, a former National Guard infantryman who had designed the VA&rsquo;s new blog in 2010 as a contractor, came on as an employee this month.

The new media team launched VA&rsquo;s official blog, VAntage Point, in November, and the group spends its days now writing posts, and updating the new Facebook and Twitter feeds. Their focus is on topics like the GI Bill, military history, homelessness, veteran suicides, and the VA&rsquo;s disability claims backlog. Some discussions have garnered hundreds of comments &mdash; praise and pillory, alike &mdash; and everything runs uncensored.

&ldquo;We don&rsquo;t take stuff down,&rdquo; Duckworth said. &ldquo;There have been veterans who have said some pretty nasty things about Secretary [Eric] Shinseki, and we leave it up, because you&rsquo;ve got to have real dialogue. If people are frustrated, frankly, VA employees who look at the blog need to know that.&rdquo;

Confronting skepticism head on, Duckworth said, is part of why she was in favor of hiring Horton and Hoit, specifically. She&rsquo;d read their blogs over the years and knew they&rsquo;d had some harsh words about the agency.

&ldquo;Alex and Kate and Brandon and myself have all been very vocal critics of VA,&rdquo; she said.

Not everything about the new media effort is controversial, of course. Much of the day-to-day work now involves things like setting up Facebook and Twitter pages for local VA facilities around the country, and trying to get the word out to eligible veterans about programs and services.

Additionally, the team follows up on postings by veterans whose comments suggest they might show danger signs for suicide, an event that happens once every two weeks on average, Friedman said.

&ldquo;The last one from the blog was, they left a comment talking about suicide, talking about hopelessness,&rdquo; Horton continued. &ldquo;So I grab his email, and I emailed the suicide prevention office, gave him the name and show them the comment. Within an hour or two they said, OK, we&rsquo;ve contacted him. He&rsquo;s OK, he&rsquo;s stable now and said he agreed to get some help at his local medical center.&rdquo;

Not everyone praises the overall effort. In the last week, Friedman and Paul Rieckhoff, president of Iraq and Afghanistan Veterans of America faced off in a sort of ongoing, online feud over just how much progress the VA had made, after Rieckhoff accused the VA of doing &ldquo;a crappy job of outreach&rdquo; in an interview.

Rieckhoff later backed off a bit, calling the decision to hire Friedman and the others &ldquo;a huge step forward,&rdquo; but added that the effort hasn&rsquo;t been robust enough.

Friedman insists that misses the point.

&ldquo;We started doing this stuff in late 2009,&rdquo; he countered. &ldquo;We&rsquo;ve made a very concerted, methodical effort to bring VA into the 21st century in terms of online communications, media, whatever. Our main Facebook page has over 100,000 followers. We&rsquo;ve got the largest Facebook following of all the cabinet agencies.&rdquo;

Still, he added, &ldquo;It&rsquo;s not about numbers. It&rsquo;s about getting a large following for a reason. It&rsquo;s so that we can really make a difference in people&rsquo;s lives.&rdquo;