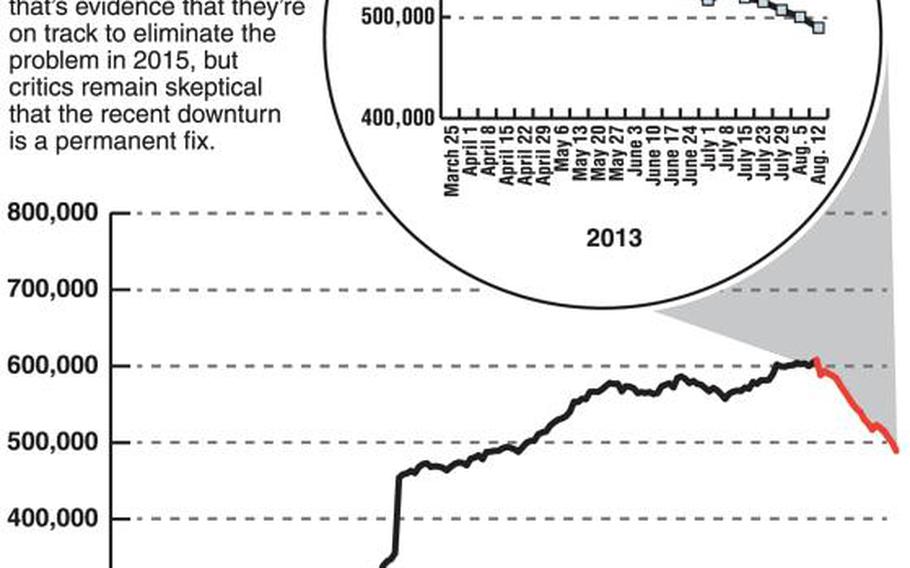 WASHINGTON — Critics of the Department of Veterans Affairs will culminate a four-month petition drive Tuesday by demanding the president take immediate action to end the million-veteran disability claims backlog.

The problem? The backlog is already under 500,000 cases, and has been falling fast since the drive began.

Supporters of the VA have dismissed the petition, organized by the conservative Concerned Veterans for America, as little more than a political stunt. But organizers insist their concerns about the still massive benefits backlog are still relevant, and the VA’s recent progress is no guarantee of future success.

“There is still a lot of question about how they reduced those numbers,” said Pete Hegseth, CEO of the group. “And the problem is clearly not gone, so we have to keep focus on it.”

The backlog — the number of claims that have taken more than 125 days to process — never totaled 1 million veterans. It peaked this year, in March, at around 608,000 cases.

But that’s four times more than in late 2009 — just a few months after Obama administration officials first vowed to end the problem — when the figure hovered around 150,000.

VA officials have blamed the steady growth of the backlog on dramatic increases in the claims filed by veterans, a decision to open tens of thousands of new cases for illnesses related to Agent Orange exposure, and antiquated paper-processing systems that have taken years to update.

For months, the department has been hammered by advocates, lawmakers and veterans for the problem. CVA and others have called for VA Secretary Eric Shinseki to resign, dismissing the explanations for the increase.

But the department reports it has made significant progress since that March peak, dropping the backlog to about 489,000 — almost 20 percent — as of last week. In June, raters finished all claims pending for more than two years, and officials insist they’re on pace to eliminate the backlog in 2015.

“We’re turning the tide,” President Barack Obama told the Disabled American Veterans convention earlier this month. “And we’re not going to let up until we eliminate the backlog once and for all.”

The recent progress is in part a result of the department’s new Veterans Benefits Management System — a paperless ratings software — and increased use of the Fully Developed Claims process, which ensures veterans have all relevant paperwork ready before starting their case.

But Hegseth notes that the department also hired new raters, instituted mandatory overtime this spring, and started issuing partial decisions on more complex cases to help pull down the numbers. He questions whether those changes are sustainable, systemic improvements, or whether the moves will provide only temporary relief.

VA officials would not directly respond to CVA’s comments, but in a statement said they are confident in the plans.

“The claims backlog is a decades-old problem, and fixing the outdated and paper-intensive claims system is an extraordinarily complex task,” the VA said. “While we have much more work to do, we are making progress, and we expect that progress to continue.”

If VA raters can keep up the processing pace of the last five months, the backlog would hit zero by early summer 2015.

But mandatory overtime for claims workers ends in October, and some employees have voiced concerns about how difficult it might be to migrate older cases into the new software systems. CVA officials still believe Shinseki should resign.

Other veterans groups have praised the secretary’s efforts, and said they are cautiously optimistic about the end of the backlog.

“We like what we’ve seen so far,” said Rich Dumancas, deputy director of claims at the American Legion. “We’re seeing some of the (Fully Developed Claims) going through in under 90 days. That will make a huge difference.”

The Legion has been a partner with VA on the FDC process since last year. Dumancas thinks the majority of future claims from disabled veterans can be submitted that way, which would mean to easier processing of those cases and quicker end dates across the board.

Earlier this month, VA began awarding one year of retroactive benefits to veterans filing FDCs, an incentive worth potentially tens of thousands of dollars in extra payouts. Officials said they expect that to boost the FDC case numbers, and in turn help continue the backlog reduction.

Hegseth said he hopes that works, and admits that the progress over the last few months has been laudable. He just isn’t convinced the pace can continue.

“This is not a problem solved,” he said. “We’re glad to see it go down. When you demand reform, things do happen. So we want to keep pressure on this.”