VA criticized over eye care for vets in rural areas 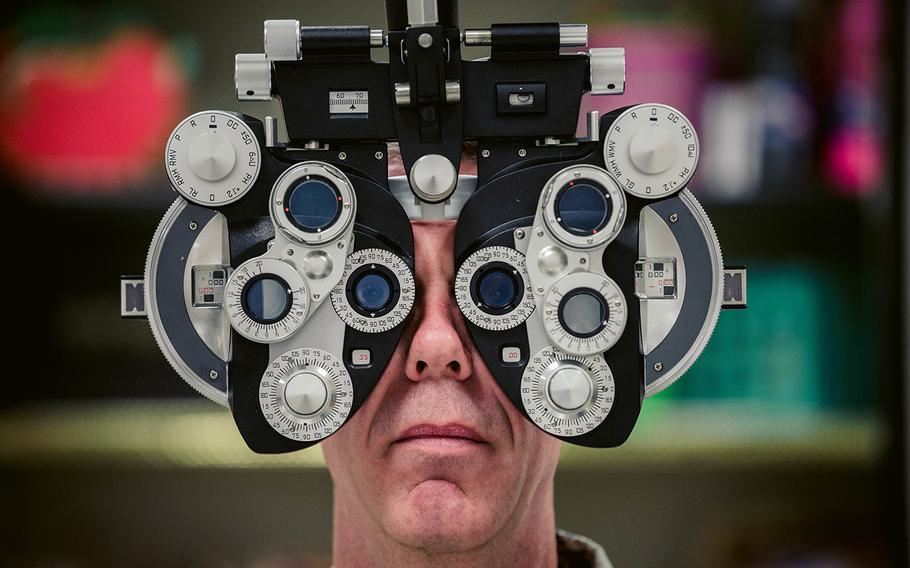 Air Force Lt. Col. David Miller, an optometrist assigned to the 442nd Medical Squadron assists in setting up a phoropter which will be used to give eye exams on Aug. 1, 2017. (Ryan Campbell/U.S. Air Force)

WASHINGTON — A Department of Veterans Affairs program aimed at increasing access to eye exams for rural and homeless veterans utilizes a technique that some optometrists consider subpar care.

Through the program, veterans receive eye screenings using technology called auto-refraction to check for vision problems and disease. The results are used as the basis for eyeglass or contact lens prescriptions.

During a typical eye exam, auto-refraction is a starting point for an eyeglass prescription, not the primary source, said Matt Willette, director of congressional relations with the 40,000-member American Optometric Association. The association has raised concerns with the VA that the method could lead to missed diagnoses and imprecise eyeglass prescriptions. It is a claim the VA disputes.

“This is an experimental protocol,” Willette said. “No one has tested to see if it’s close to an eye exam, or if it misses a lot of stuff. That really worried us, veterans being experimented on.”

The program, called Titled Technology-Based Eye Care Services, or TECS, started in 2015 in clinics surrounding the VA medical center in Atlanta. The following year, the state of Georgia enacted a law requiring prescriptions for eyeglasses to be issued after an in-person, comprehensive exam and not limited to information from an auto-refractor. Because the VA is a federal agency, the law does not apply.

The American Optometric Association has issued complaints about TECS since about mid-2016, Willette said. The organization has recently increased its protest after learning the VA might expand the program to more sites nationwide.

In response to criticisms that TECS offers substandard care, VA spokesman Curtis Cashour said those claims were “not at all accurate.” There’s a quality-assurance system in place, he said, that “tracks outcomes and ensures high-quality care.” The screenings are conducted by licensed and certified ophthalmologists, he said.

But for at least the first 13 months of TECS, a technician conducted the screening, according to a published report on the program. The results were then sent to an eye doctor, and patients with abnormal findings were scheduled for face-to-face exams.

Last January, leaders of TECS published early findings that the program saved time for veterans and physicians and led to cost savings for the VA when compared to face-to-face exams at VA hospitals.

The VA is also touting it as a method to improve veterans’ access to care.

Of the 2,690 veterans who received a checkup in the program’s first 13 months, 33 percent secured a same-day appointment, and 98 percent got an appointment within 30 days of requesting one, according to the published findings.

“The goal of the program is to reduce health care disparities in veterans by providing better access to eye care for rural and homeless veterans,” Cashour said. “These populations are medically underserved, and VA is working to modernize and improve the way we deliver eye care to our veterans to prevent blindness.”

But Willette argued veterans failing to get an appointment at a VA facility could turn to the Choice program for a comprehensive eye exam, rather than settling for an inferior checkup. The Choice program, created in 2014 to reduce wait times, allows VA patients to receive private-sector medical care.

“VA is essentially trying to pass it off as an eye exam, but it’s not,” he said.

Sen. Johnny Isakson, R-Ga., wrote a letter to the VA in February 2017 with concerns TECS was providing a lesser level of care for veterans and “providing them with a false sense of security” that they were receiving treatment on par with a complete eye exam. Isakson’s office said Wednesday that his staff members received a briefing about TECS weeks after the letter was sent.

“It was very helpful and we were satisfied with the information we received,” said Amanda Maddox, Isakson’s spokeswoman.

Another senator, Republican John Boozman of Arkansas, questioned VA Secretary David Shulkin about the program in June. Boozman, a trained optometrist, has expressed concerns about the TECS screenings being based on experimental technology that hasn’t been tested for accuracy and provides only limited results.

“That truly is third-world,” Boozman told Shulkin at a congressional hearing. “There is no example of this going on in private practice in America.”

Shulkin, new to the job at the time of the hearing, said he would look into the program.

AMVETS, a national veterans service organization, also has spoken out about TECS. Joe Chenelly, its executive director, described it as “misguided.”

“They appear to be reducing the quality of service for veterans,” he said.

As of now, the program is based at several VA medical centers in addition to the one in Atlanta and about 8,000 veterans have been screened through TECS, Cashour said.

“We don’t know where to go from here,” Willette said. “I certainly don’t want to bash the VA, they’ve got a difficult job, but this is one of the things they need to deal with.”