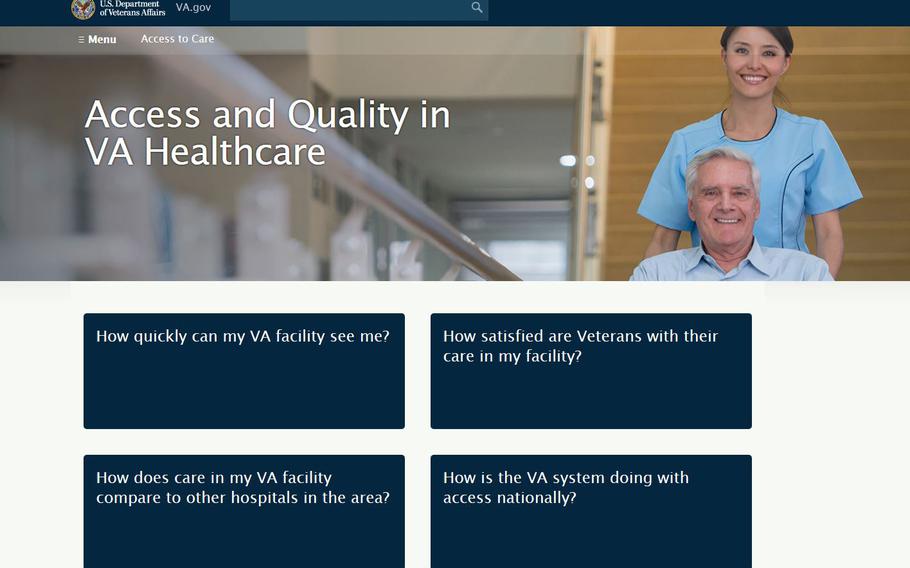 WASHINGTON — The Department of Veterans Affairs on Wednesday bolstered the information it shares publicly about the quality of its health care facilities and how long veterans are waiting for treatment.

A new VA website launched Wednesday gives patients a method to find the average wait times for appointments at VA health care facilities in their area. The site – www.accesstocare.va.gov – also shows veterans’ feedback on each VA facility, based on national patient surveys conducted by the Department of Health and Human Services.

The website drew praise from veterans organizations, lawmakers and other health care systems for the extent of its transparency. Its launch Wednesday has also encouraged Johns Hopkins HealthCare to start conversations about whether it should release similar data, said Peter Pronvost, director of Johns Hopkins’ Armstrong Institute for Patient Safety and Quality.

“We’re already looking to see what we could learn from this. I think there will be lots of health systems that learn from this,” Pronvost said. “The VA is demonstrating great leadership because they are transparent about things that they’ve had shortcomings for in the past, and what they’ve been criticized for. Patients deserve truthful, timely and transparent information about our performance.”

The launch came after former VA Secretary Bob McDonald reluctantly released performance ratings last year for each of the agency’s hospitals. The information was released to the public under pressure caused by a USA Today investigation in December that revealed the ratings were being held, undisclosed, within the VA.

McDonald said at the time that the ratings were kept from public view out of concern that veterans would be discouraged from seeking treatment at the facilities with low rankings.

Poonam Alaigh, the acting under secretary for health, said Wednesday that the VA – now led by Secretary David Shulkin -- has a new perspective that outside scrutiny will provide more motivation for improvement. “So many times, change happens because of outside stakeholders helping us mobilize from within and bring about change,” Alaigh said. “This is a huge opportunity for us, as we’re trying to not just embark upon incremental change, we want transformative, monumental change. This will help bring the rigor and urgency internally to start becoming competitive.”

The VA intended the website to reveal how VA hospitals compare to other, nearby hospitals. Right now, that information is only available for roughly a dozen metropolitan areas. Some of the data included on the site also might be difficult to understand, Alaigh conceded.

A more comprehensive website will roll out May 1. At that time, the site will also include phone numbers for each health care facility and space for veterans to write feedback directly to each location.

The wait-time data will be updated once every month, and veterans shouldn’t assume that’s the exact number of days that they’ll have to wait for an appointment, Alaigh said. Eventually, the VA wants to update the information more quickly.

“This is not perfect, but it’s good enough to get us started, and we’re going to continuously improve it as we move forward,” Alaigh said. Members of the American Legion, Veterans of Foreign Wars and Disabled American Veterans were at the VA for the website launch Wednesday. All said they thought the information would help with accountability.

“It’s an open window,” said Joseph Plenzler, director of media relations at The American Legion. “If I’m sitting in the shoes of an administrator, and I know my scores are being put up there with everyone else, I want those to be good scores.”

Joe Davis, the VFW’s director of communications, warned the VA would need to ensure wait-time data reported from each health care facility was correct.

Alaigh responded the VA simplified the system for scheduling appointments in order to better identify patterns of manipulation. Pronvost said he was “confident the VA made efforts to make sure the data is accurate,” but also suggested it provide information on how the data is collected.

“It gives you all the information. Whether it’s good or not, it’s there,” Alaigh said.

Gregg Meyer, chief clinical officer of Partners Healthcare System in Boston, said he viewed the initiative as the VA “catching up to the private sector.”

“I think it will be a useful tool for veterans, but – much more importantly – it’s really going to motivate the VA to improve,” said Meyer, a retired Air Force colonel. “Everyone wants to win, to show that they’re the best.” Patrick Courneya, an executive at Kaiser Foundation Hospitals, also predicted it would “drive change” within the VA.