VA attempts to recoup money paid to veterans in prison 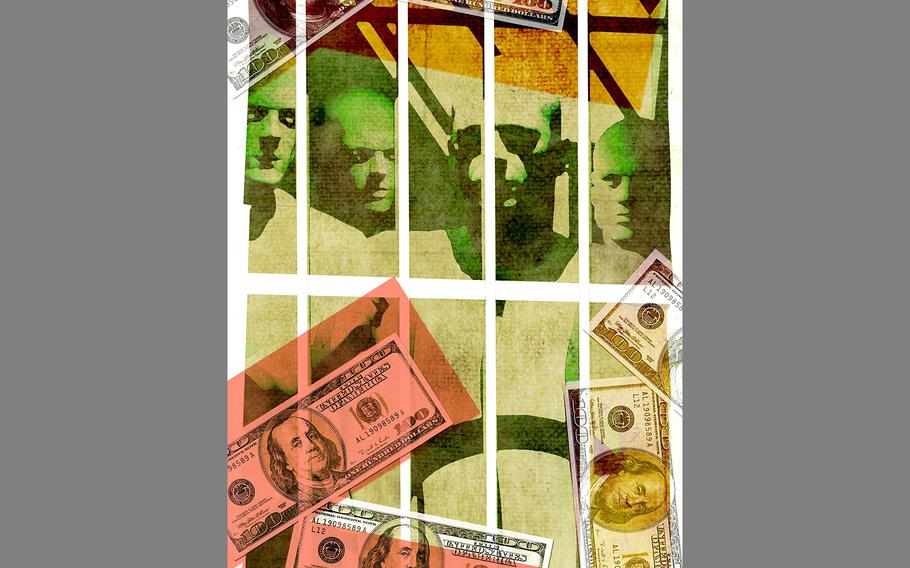 An illustration depicts the cost associated with jailing prisoners. In testimony Tuesday, Sept. 27, 2016, during a congressional hearing on Capitol Hill in Washington, D.C., a Veterans Affairs official said the VA is billing veterans who received benefits while incarcerated when they were not entitled to the benefits. (Rick Nease/Detroit Free Press/MCT)

WASHINGTON — The Department of Veterans Affairs is billing veterans who were incarcerated at any time since 2008 for benefits they received – but shouldn’t have – while in prison, a VA official said Tuesday.

Beth Murphy, an official with the Veterans Benefits Administration, faced a congressional subcommittee Tuesday, three months after the VA inspector general’s office found VA employees failed to reduce benefits payments to veterans who were incarcerated in federal, state or local institutions, as federal law requires. The failure on the part of the VA to alter benefits led to $104 million in overpayments from May 2008 to June 2015.

After the IG initiated the review, the VA started to collect.

Murphy said VA staff followed up last year on 11,500 instances where benefits needed to be reduced. So far this year, staff has worked on nearly 15,000 cases. When it’s discovered a veteran owes a debt, the case is sent to the VA’s Debt Management Center. Murphy did not say how much money has been collected so far.

“VBA has issued guidance to all regional offices to make sure these claims are appropriately prioritized,” Murphy said.

There are about 13,000 cases still pending, she said, and VA staff is working to complete the oldest first.

Rep. Ralph Abraham, R-La., said he was concerned the VA had been blaming the veterans, and then sticking them with unexpected bills for payment.

Murphy had said part of the reason benefits go unchanged is because veterans don’t notify the VA when they’ve been incarcerated.

“I would venture to say these veterans have more urgent matters on their minds than remembering to contact the VA from prison,” Abraham said. “Even if a veteran did notify the VA, there is no evidence VA would have promptly processed the adjustment. Veterans who have received these overpayments have committed crimes, but they are not at fault for the overpayments.”

David McLenachen with the Veterans Benefits Administration conceded the VA was “not doing a good enough job on this” but said the agency had a legal obligation to recoup the overpayments.

If veterans can’t afford the bill in a lump sum, they will have to sacrifice future benefits in order to pay back the debt or establish a payment plan, Murphy testified.

In about half of the cases, the VA waives at least part of the debt, Murphy said. That can happen when a veteran’s spouse or children needed the benefit to survive while the veteran was in prison.

Changes to be made

Though the VA has handled thousands of cases the past couple of years, it hasn’t improved all of the issues that caused the benefits payments to go unchanged.

According to the IG report, VA staff told inspectors that reducing payments to incarcerated veterans was not a high priority. If it doesn’t become more of one, it could cost the VA another $203.8 million through fiscal 2020, inspectors estimated.

Though Murphy said the VA has advised its regional offices that the changes are important to complete, Abraham said at the end of Tuesday’s meetings that he was still “very concerned that VA is not properly prioritizing its workload.”

Law requires compensation and pension benefits be reduced for veterans who are in a penal institution for more than 60 days.

VA employees weren’t handling the cases because they were bogged down with work on a large backlog of claims for disability compensation, Murphy explained. The backlog has drawn criticism from veterans and lawmakers, and President Barack Obama and VA leaders announced a plan to eliminate it by 2015.

Though that goal hasn’t been achieved, Murphy noted Tuesday there were “record-breaking” numbers of disability claims completed in recent years.

“Unfortunately, work has piled up in other areas,” said Rep. Dina Titus, D-Nev. “While benefits backlog was a top priority, other work was put on the backburner.”

Part of the neglected work was reducing payments to incarcerated veterans, according to the IG’s report.

The VA also has problems with the method it uses to determine what veterans are incarcerated and when. The Federal Bureau of Prisons provides data to the VA, Murphy said, but it is incomplete.

“The information we get doesn’t include the date of incarceration, so we have to follow up in a manual manner, with a phone call or letter,” Murphy said. “There are processes and time lags involved in getting this information if it’s not provided to us.”

Murphy also said the VA needed to develop better technology to automate parts of the process.

“It sounds like you know what you want to do, but you haven’t started doing it,” said Rep. Doug Lamborn, R-Colo. “You haven’t followed through quite yet.”

Michael Missal, who was appointed as VA inspector general earlier this year, said his office would keep track of VA’s progress on the issue. Missal said he’s also working to expand inspections into the VA’s benefits programs in the future.