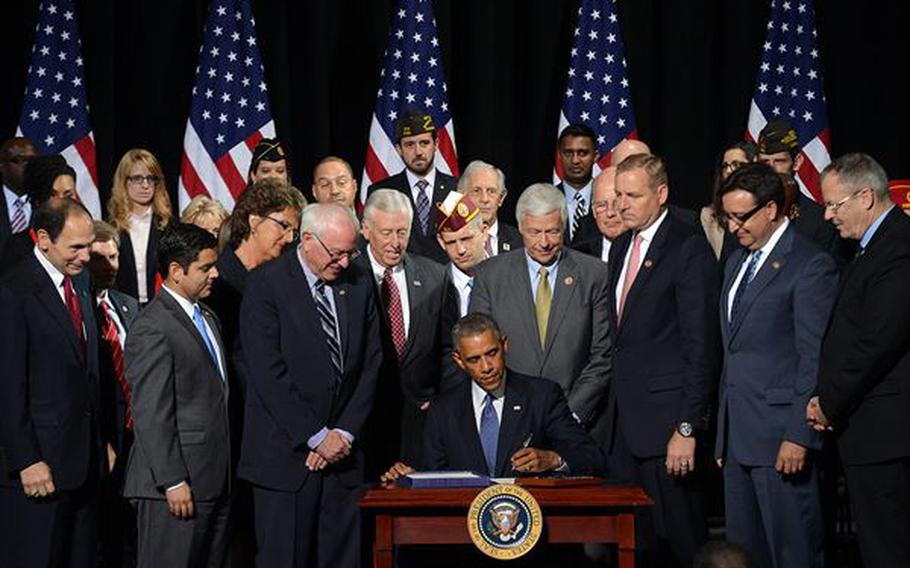 President Barack Obama signs the Veterans’ Access, Choice and Accountability Act of 2014, at Fort Belvoir, Va., on Aug. 7, 2014. The The Department of Veterans Affairs notified Congress on Friday that it will no longer enforce the law. (Pete Souza/White House)

WASHINGTON — The Department of Veterans Affairs notified Congress on Friday that it will no longer enforce a law passed after the 2014 wait-time scandal aimed at quickly firing employees.

The law reduced the appeals process by fired employees to just three weeks, versus many months, and was designed to root out a perceived culture of corruption at the VA as part of the $16-billion Veterans Access, Choice and Accountability Act.

But the streamlined appeals process has raised legal concerns since being unveiled two years ago. It took a final hit late last month when the Justice Department agreed with former Phoenix VA director Sharon Helman that the short appeals were unconstitutional, leaving open the possibility that the executive at the center of the 2014 scandal could someday return to work.

The VA has struggled to fire or reprimand a series of executives charged with misconduct since the scandal. Its announcement Friday left lawmakers frustrated and scrambling for new reform legislation on employee firings.

“It is outrageous and unconscionable that the VA is choosing to blatantly ignore all of the accountability reforms set in place by the Veterans Choice Act,” Sen. Johnny Isakson, R-Ga., chairman of the Senate Committee on Veterans’ Affairs, said in a released statement.

Before the 2014 scandal, terminated VA employees had the same option as other federal employees. They could appeal their termination to the Merit Systems Protection Board in a process that could typically take months.

Pressure built to fire executives – and do it more quickly -- after a joint VA-White House investigation during the summer of 2014 found a “corrosive culture” and widespread poor management at veteran hospitals. Congress passed a dramatically scaled-back appeals process with an administrative judge making a final decision within 21 days and no appeal options.

At the time, lawyers who specialize in federal employment cases as well as a group representing federal executives warned the changes were a “recipe for disaster” and were likely unconstitutional.

The concerns came full circle May 31 when U.S. Attorney General Loretta Lynch announced her department would not fight Helman’s legal contention that the fast-track firings are unconstitutional because VA employees cannot appeal beyond the administrative judge.

A whistleblowing doctor claimed that as many as 40 veterans died waiting for health care in Phoenix while Helman was the director. The former executive was eventually fired for accepting gifts such as a Disney trip and Beyonce concert tickets and is now suing over her ouster.

The move by the Justice Department and now the VA has left Congress back at square one.

Isakson and 43 Senate cosponsors have proposed a new reform bill that puts all employee firings in the hands of VA Secretary Bob McDonald and removes the Merit System Protection Board from the equation.

But the wide-ranging reform bill has not moved forward in the Senate. It remains hung-up on a debate with Sen. John McCain, R-Ariz., over giving veterans universal access to outside health care.

“It is the only pending bill in Congress that can stand up to a constitutional challenge and will offer sweeping accountability reform,” Isakson said.

The House passed a bill sponsored by Rep. Jeff Miller, R-Fla., last year that also gives the VA secretary the power to quickly fire employees for misconduct or poor performance.

Miller, who is chairman of the House Committee on Veterans’ Affairs, said the VA announcement Friday calls into question whether the department is interested in disciplining employees.

“This decision underscores the urgent need for civil-service reform across the federal government that enables leaders to swiftly and efficiently discipline those who can’t or won’t do their jobs – an ability that is presently almost nonexistent,” he said in a released statement.