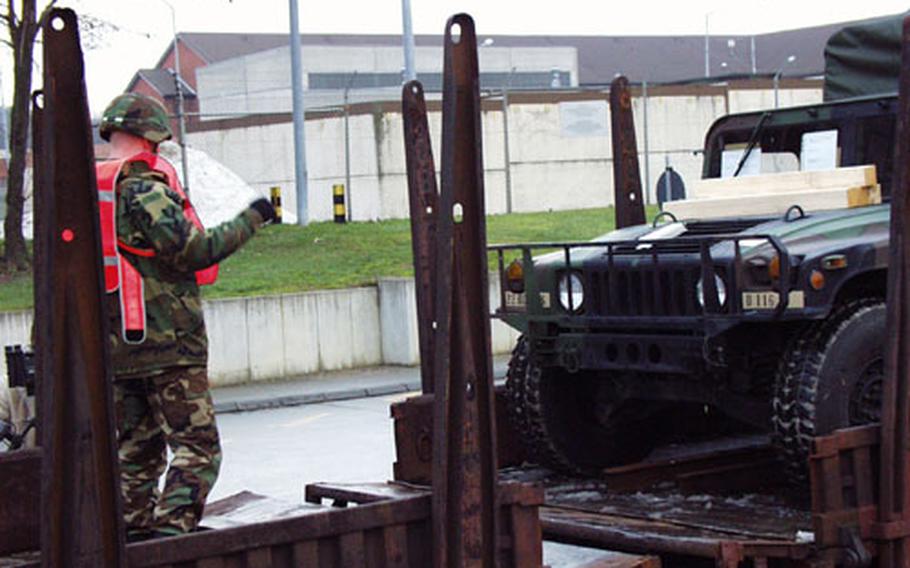 A 17th Signal Battalion soldier guides a Humvee aboard a troop transport train at the Harvey Barracks railhead in Kitzingen, Germany. The unit is one of several called up last weekend for deployment to an unknown destination in the Middle East. (Steve Liewer / S&S)

A 17th Signal Battalion soldier guides a Humvee aboard a troop transport train at the Harvey Barracks railhead in Kitzingen, Germany. The unit is one of several called up last weekend for deployment to an unknown destination in the Middle East. (Steve Liewer / S&S) 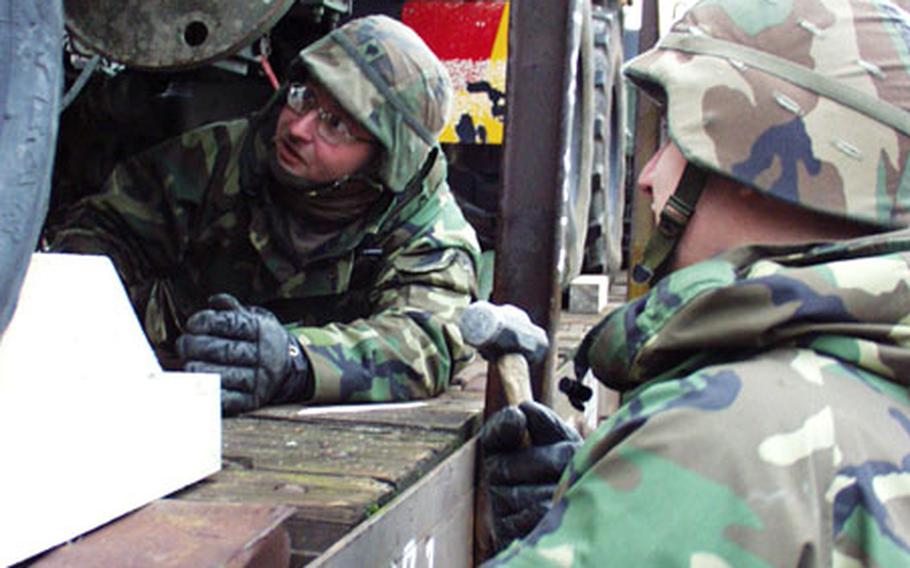 Spc. Timothy Collins, left, and Spc. Jason Horn secure an Army truck to a transport train at Harvey Barracks in Kitzingen, Germany, in preparation for a deployment. The soldiers are members of the Kitzingen-based 17th Signal Battalion, one of several V Corps units called up last weekend for deployment to an unknown destination in the Middle East. This is the battalion&#39;s first call-up for possible combat duty since World War II, said battalion commander Lt. Col. Brian Moore. (Steve Liewer / S&S)

ILLESHEIM, Germany &#8211; Spc. Mario Quinn and his buddies are packing up for a long trip.

For the past few days, almost around the clock, he and the rest of the troops from 11th Attack Helicopter Regiment have been loading trucks and trains with supplies for shipment somewhere in Southwest Asia. Few of the soldiers know where or when they&#8217;ll see this stuff again.

This week, the heavy lifting began for the Quinn&#8217;s regiment and several other V Corps units that received short-notice call-ups last weekend for indefinite deployments to the U.S. Central Command&#8217;s area of responsibility, which includes the Middle East. It&#8217;s widely assumed they&#8217;re preparing for an attack on Iraq. Secretary of Defense Donald H. Rumsfeld gave marching orders to about 90,000 troops in recent weeks, boosting the total force to about 152,000.

Soldiers from the 17th Signal Battalion in Kitzingen, Germany, and the 12th Aviation Brigade in Giebelstadt also began loading transport trains this week. They, too, are expected to rendezvous with their gear in the Middle East sometime next month. The three units combined will contribute nearly 2,000 soldiers.

Packing up for deployments is nothing new for these troops. Facing the threat of hostile fire on the other end is what&#8217;s unusual.

The sudden deployment has turned Chief Warrant Officer Robert Elbert Jr., 32, into a busy man. He supervises logistics for the regiment. The past few days, he&#8217;s been making sure that every vehicle is ready.

This deployment is historic for the regiment because it will be deploying a squadron of the new AH-64D Apache Longbow helicopters. The Longbow, a high-tech &#8220;glass cockpit&#8221; upgrade that employs the old Apache airframe, has performed well in training but never been tested in combat.

For the 17th Signal, this assignment is historic for a different reason. The battalion, formed 60 years ago, is being deployed to possible combat for the first time since World War II.

Flatbed railcars have lined up at the railhead at Kitzingen&#8217;s Harvey Barracks this week. Soldiers have been shoveling snow from the cars, driving their vehicles aboard, fastening wooden chalks to the tires and tying them down. The 12th Aviation soldiers will do the same through the weekend. All together, 500 to 600 pieces of equipment are being shipped from Harvey, said Lt. Col. Russ Hall, commander of the Kitzingen-based 417th Base Support Battalion.

One thing that won&#8217;t ride the rails is the helicopters themselves, said Heinz Urbach, a 12th Brigade spokesman. The unit&#8217;s 60 deploying aircraft &#8212; including UH-60 Black Hawks and CH-47 Chinooks &#8212; will fly to port. There workers will remove the rotors and stow them aboard ships for shipment.

While much of the war-fighting material already is on its way to the Middle East, the soldiers themselves aren&#8217;t leaving just yet. Army spokesmen say they will be deploying gradually over the next month.

Though most of the troops that would be used in a war against Iraq are being sent from the United States, V Corps has been asked to contribute thousands of Europe-based troops. Among the other units in the Middle East or headed that way: