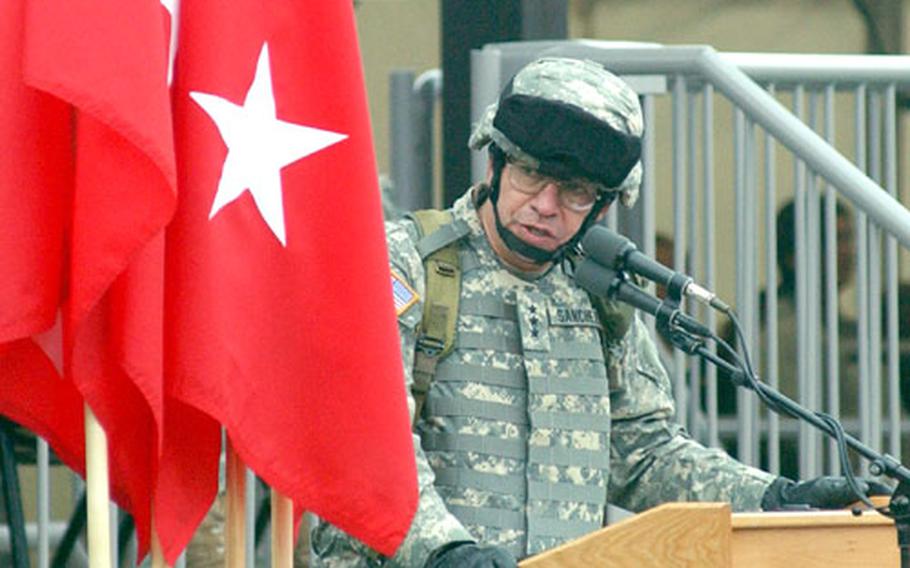 Soldiers of V Corps&#39; Special Troop Battalion sing the Army Song at the conclusion of the farewell ceremony in Heidelberg on Tuesday. (Michael Abrams / S&S) 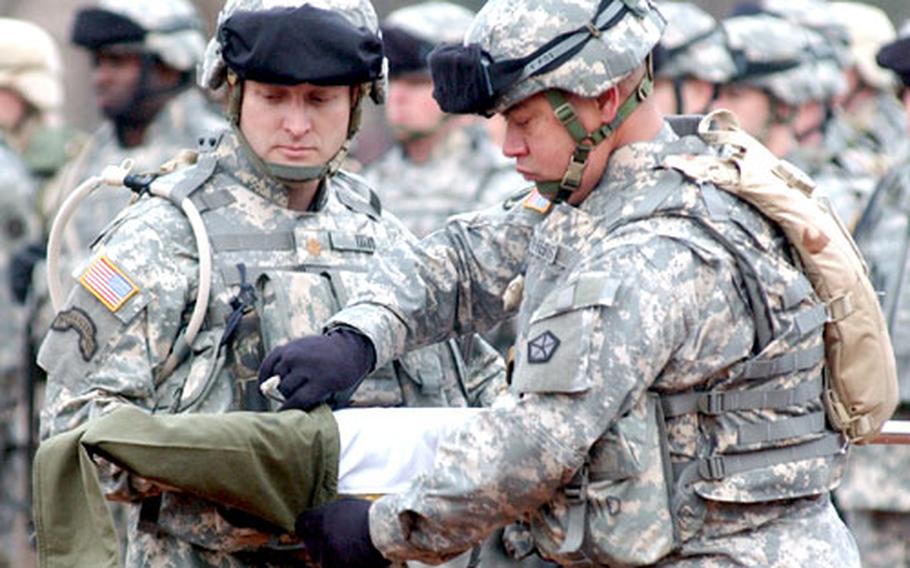 HEIDELBERG, Germany &#8212; It was farewell Tuesday to the soldiers of V Corps Headquarters and the 76th Army Band who, despite plans for U.S. troop reductions in Iraq, will leave Germany within a matter of days for a second, yearlong Iraq tour.

The unit, which headed up war efforts in 2003, returns to Baghdad to replace the 18th Airborne Corps as commander of Multi-National Corps Iraq, which is responsible for directing coalition military efforts.

The unit&#8217;s more than 600 soldiers will join what was scheduled to be 11,500 V Corps soldiers in the latest Iraq rotation.

At Tuesday&#8217;s farewell ceremony on the Campbell Barracks parade field, V Corps headquarters soldiers were told they should expect their boots to be on the ground for 365 days or until their mission is complete, just as their orders said.

&#8220;A daunting task lies ahead, but I have no doubt you are well-trained,&#8221; said Lt. Gen. Ricardo Sanchez, V Corps commander since 2003, who spent a tumultuous year in Iraq. He told the soldiers that conditions there have changed, and although ultimately Iraq has a &#8220;prosperous future,&#8221; its current condition is problematic.

He also told the troops to &#8220;ask (yourselves) about the needs of the young soldier out on patrol in the middle of the night.&#8221;

Sanchez told other generals gathered at the ceremony that when they return to the parade field after their mission is done and remember the soldiers who died in Iraq, they ought to be able to say &#8220;none of them died because of training or leadership failures on our part.&#8221;

Among those generals was Maj. Gen. Pete Chiarelli, who as commander of Multi-National Corps Iraq, will lead V Corps&#8217; soldiers there as well as other coalition soldiers. Chiarelli, who last commanded the 7th Cavalry and returned from Iraq very recently to Fort Hood, Texas, did not make a speech.

She said he was not doing media interviews until he arrived in Iraq.

Sanchez remains corps commander, albeit with a reduced headquarters.

The first speaker at the ceremony was Gen. David McKiernan, who assumed command of U.S. Army Europe last month. McKiernan, who in 2003 led the Iraq ground invasion and made it from Kuwait to Baghdad in 16 days, told the soldiers, &#8220;There is momentum now in Iraq.&#8221;

McKiernan cited the three elections in the country, the 10 million Iraqi voters, the 30 Iraqi battalions he said were able to take the lead in their areas, the 12 bases that coalition soldiers had handed over to Iraqi forces and the six police academies now turning out Iraqi police officers.

The Army band unit&#8217;s duties do not involve combat, but some of its soldiers will be tasked for patrols within their headquarters camps and convoy protection, Martin-Hing said. Asked what the band would be doing in Iraq, Patton said its members perform a variety of nonmusical duties, such as serving as prison guards.