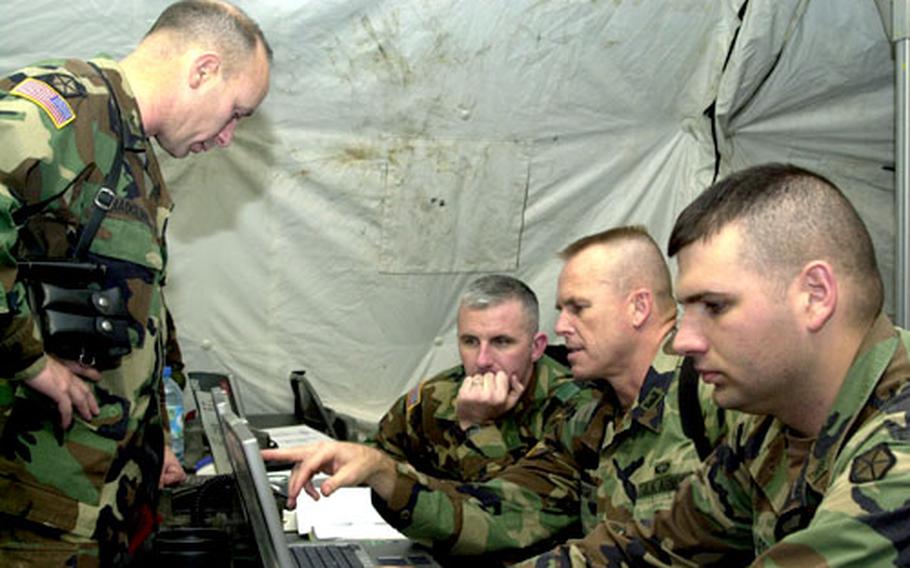 HEIDELBERG, Germany &#8212; The Army headquarters that led the blitzkrieg invasion of Iraq and the first year of occupation duties there, launched initial field maneuvers this week in preparation to return to the war zone.

&#8220;We are operating on the assumption that some or all of us will be going back into the fight,&#8221; Col. Sean MacFarland, head of operations for the Germany-based V Corps, told Stars and Stripes.

Exactly when that will be, he said, remains to be seen. Officials are remaining tight-lipped on specific deployment plans.

But with the Army outfitted with only three active corps &#8212; the nucleus for the top field command units in Iraq &#8212; MacFarland said it&#8217;s only a matter of time.

If the cycle of yearlong deployments repeats itself, that would put V Corps on its way to Iraq in early 2006. Army leaders, however, have expressed hope of reducing Iraq tours to six months. That could mean a turnaround back to Iraq for V Corps as early as the summer of 2005.

Regardless, MacFarland said, the corps could be ready to deploy as early as April.

The exercise is designed as the first major building block in the reconstitution of the corps&#8217; war-fighting skills since top staff and main support units returned from Baghdad.

Although troops have been setting up for the war games for the past two weeks, the exercise itself runs through Monday, split about 200 miles apart on opposite sides of central Germany. To the west, about 750 troops will work from the 1st Armored Division headquarters in Wiesbaden and 2,400 troops operate from the Army&#8217;s main training range in Grafenw&#246;hr, to the east.

The separation will allow commanders to replicate the vast distances units most work across in Iraq.

With about one-third of the staff new to the corps since it returned from Iraq in February, &#8220;this gives everyone an opportunity to work together for the first time and establish our battle rhythm.&#8221;

With Victory Start under its belt, the corps staff will shift focus from training to the real-world oversight of pushing Europe-based units deploying to Afghanistan and Iraq. That will include, for example, training assistance for the Southern European Task Force, which is slated to take over command duties in Afghanistan.

The weeklong exercise will be conducted mostly at Grafenw&#246;hr and be run by the Army&#8217;s Battle Command Training Program from Fort Leavenworth, Kan. The program&#8217;s staffs operate as a combination of evaluators and a free-thinking &#8220;opposing force&#8221; in simulations.

The corps has canceled its annual Victory Strike exercise in Poland.

Considered the pinnacle of the corps&#8217; annual training plan, Victory Strike had been slated to run Aug. 15 to Sept. 15 next year.

Instead, whenever the corps does get its orders for deployment, the staff and support units will undergo a three-week Mission Rehearsal Exercise to certify the staff is good to go.