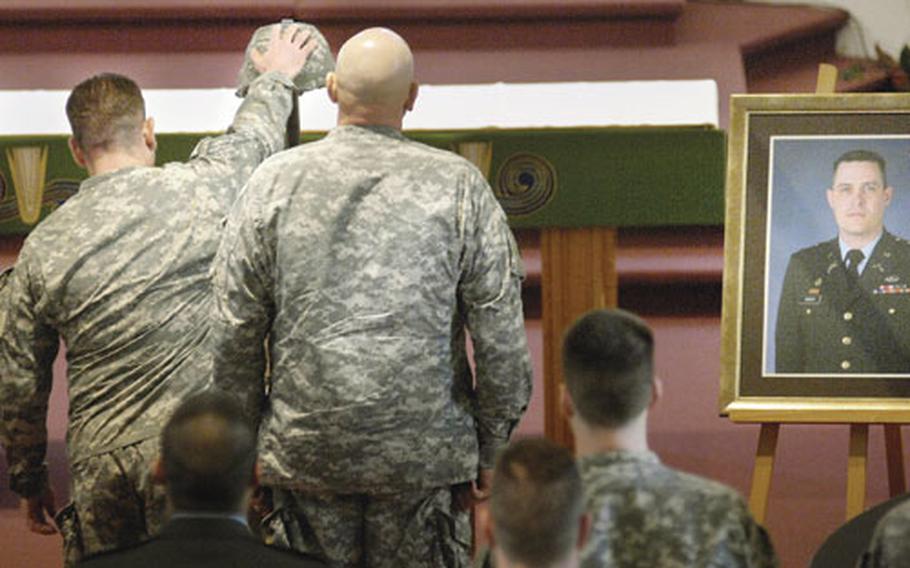 V Corps’ Command Sgt. Maj. Ralph Beam reaches out in remembrance of Maj. Michael Green at the conclusion of a memorial ceremony in his honor Tuesday at the Patrick Henry Village Chapel in Heidelberg, Germany. Green, a team leader for a Counter Improvised Explosive Device Team, died on Jan. 7th while serving as convoy commander with an explosive ordinance detachment in Afghanistan. (Ben Bloker / S&S)

HEIDELBERG, Germany &#8212; The first V Corps&#8217; headquarters soldier killed in Afghanistan &#8212; and one of the three highest-ranking U.S. Army Europe-based officers to be killed in action in either that country&#8217;s war or Iraq &#8212; was memorialized Tuesday.

Maj. Michael Green was killed Jan. 7 when the Humvee he was riding in, while on a mission to find and disarm a roadside bomb, was itself hit by a roadside bomb. He was 36.

Green had been assigned to V Corps&#8217; G3 Operations Center in Heidelberg only a couple of months when he volunteered to go to Afghanistan as an individual replacement on the Joint Task Force Paladin&#8217;s Counter Improvised Explosive Device Team.

He was killed on his first mission, according to his mother, Jane Green.

At Tuesday&#8217;s service at the Patrick Henry Village chapel, which was filled with more than 200 soldiers, Green&#8217;s friends and the chaplain said that he had died doing what he loved and what he believed in.

Green was commissioned through ROTC at Fairmont State University in West Virginia and began his career as an armor officer 13 years ago. He met Lt. Col. Joe Holland when both were assigned to the 3rd Battalion, 66th Armor Regiment at Fort Hood, Texas, more than a decade ago.

Holland explained later that operations officers put in long hours on weighty matters under the thumb of commanders, and that young, lower-ranking officers &#8220;bear the brunt.&#8221;

But Green never lost his positive attitude, his wide grin and his way of injecting humor and goodwill into even &#8220;very serious&#8221; conversations with superiors, Holland told the assembled soldiers. &#8220;The misery never fazed him.&#8221;

When Holland and Green met again recently in Germany, Holland said his old friend hadn&#8217;t changed, and was looking for a way out of his staff job as &#8220;Future Operations Chief&#8221; and into combat. &#8220;He exploited every chance he got to be with soldiers,&#8221; said Holland, now the V Corps commander&#8217;s executive officer.

So it was fitting that the soldier who died with him, Sgt. James Healy, also be remembered Tuesday, Holland said. &#8220;He died in the snow in Afghanistan, with Michael out front, leading soldiers, in harm&#8217;s way.&#8221;

The V Corps memorial was not the first for Green. Before he was buried Saturday, hundreds of mourners packed to overflow the First Baptist Church of Gautier, near Biloxi. Despite cold weather, as his motorcade passed through three towns, people lined the highway in his tribute, according to news reports.

Green&#8217;s short time in Heidelberg, as well as his short time in Afghanistan, meant that many soldiers gathered for his service did not know him well, Moran said. But, he said, &#8220;Michael L. Green is well-known. The number of our days is in the mind of God already. The good news is it is a rich life.&#8221;

Green was awarded the Bronze Star Medal, a Purple Heart and the Combat Action Badge posthumously.