V Corps sets up shop in one of Saddam's entertainment facilities 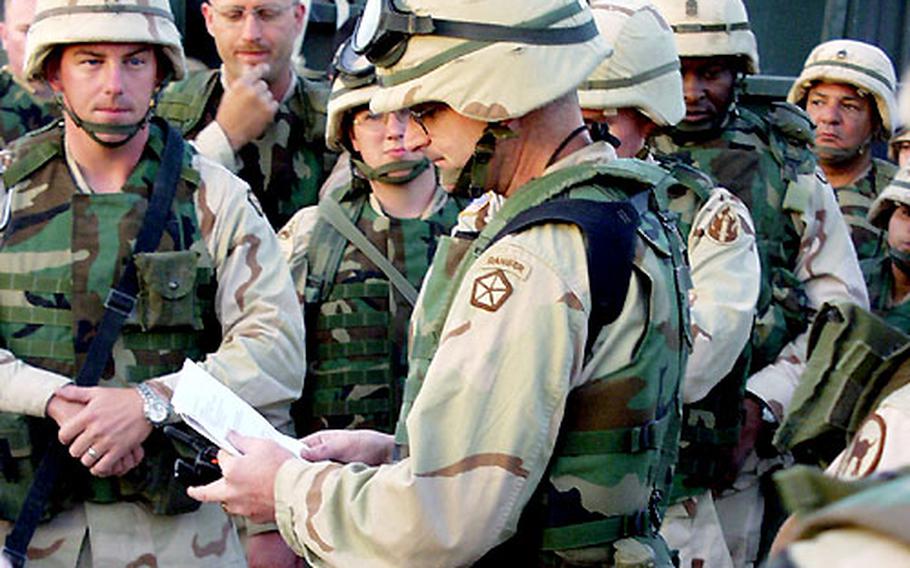 The headquarters, which has about 1,200 people, shifted its main element from Camp Virginia in Kuwait to Victory Camp, on the outskirts of Baghdad, during a 36-hour convoy that began Friday morning and endured sandstorms, blistering heat, rain and dozens of camels ambling across its path.

The shift demonstrates how the mission in Iraq is changing, said Army Col. David Brown, V Corps director of operations.

Although armed conflict is still taking place, particularly in northern Iraq and in smaller pockets throughout the country, Brown said the mission is shifting to one that will stabilize the country and help the Iraqi people.

Before the shift, for example, two civil affairs officers were in the command post; now there are six.

In addition, combat units are performing non-combat tasks. Artillery units, no longer firing their big guns, are excellent at transporting uncovered caches of weapons, Brown said, and will be useful in delivering humanitarian assistance.

Combat engineers, who destroy things in battle, can now rebuild schools and bridges and help restore electrical power, he said.

The change can be difficult for soldiers who have grown accustomed to their combat role, he said.

&#8220;It&#8217;s a tough transition for soldiers, but they are trained to do it,&#8221; said Brown, who added similar mission shifts took place in Somalia, Haiti and the Balkans.

The V Corps main headquarters element arrived in Baghdad on Saturday and spent the next two days setting up computers and other equipment and establishing communications.

Coalition Forces Land Component Command is using the main palace at Victory Camp, which is a walled compound roughly nine square miles in area and was probably used as an entertainment facility.

V Corps is using a smaller palace that is nearly intact and includes mammoth crystal chandeliers that catch the glint off the computer screens of headquarters staff.

Settling on Victory Camp as the proper place for the headquarters was a challenge, said Lt. Col. Hank Dodge, V Corps commander for the Special Troops Battalion. Dodge left Camp Virginia a week before the convoy to scout six different locations in the Baghdad area.

Victory Camp was chosen for several reasons. One is the proximity to the airport. Also, Dodge said, it is an easy place to protect because it is on the edge of Baghdad and the surrounding neighborhood includes no high-rise buildings that could accommodate snipers.

Still there are force-protection concerns. Sporadic gunfire is heard from across the walls that surround Victory Camp.

The gunfire could be celebratory or from on-going firefights within the city, he said.

For the staff from V Corps HQ, the roughly 300-mile trip north from the Kuwait border to Baghdad was an opportunity to see firsthand what took place during the weeks of fighting.

From his Humvee, Brown said, he could see the residue of skirmishes his staff had planned.