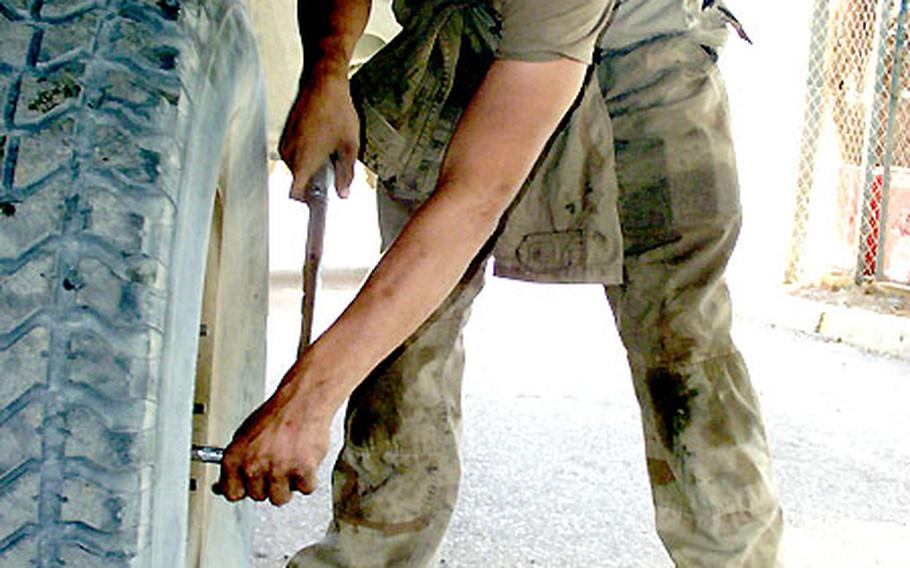 BAGHDAD, Iraq &#8212; Getting ahold of spare parts is usually one of any Army unit&#8217;s greatest challenges. In Iraq, it definitely is.

That&#8217;s exactly what Binnari, whose 17 soldiers keep the top brass&#8217; wheels on the road, did before the unit moved from Kuwait to Baghdad during the war.

Having heard in August about a possible deployment to the desert, Binnari&#8217;s Heidelberg, Germany, unit started laying aside every part needed to keep the vehicles for the generals and their staffs on the road.

In the months leading up to the move to Kuwait, the unit moved to Poland for Operation Victory Strike, a war game mimicking what was expected in the Middle East. Then, it deployed part of its unit to Grafenw&#246;hr, Germany, as part of Operation Internal Look.

Finally in January, the mechanics put all of the vehicles, including generators and other equipment, on a ship to Kuwait.

While at Camp Virginia in Kuwait, the mechanics&#8217; usual inventory of 240 vehicles grew to 800 when they became the chief mechanics for the 3rd Infantry Division&#8217;s command post.

Knowing a trek north into Iraq was imminent, the mechanics worked 18- to-20-hour days making sure all the vehicles were ready to roll.

It was hard to prevent the omnipresent desert sands from fouling engine parts.

By the time the mechanics got to Victory Camp in Baghdad, they had been on the road virtually nonstop for more than six months.

In the end, they made it to Baghdad without a single breakdown.