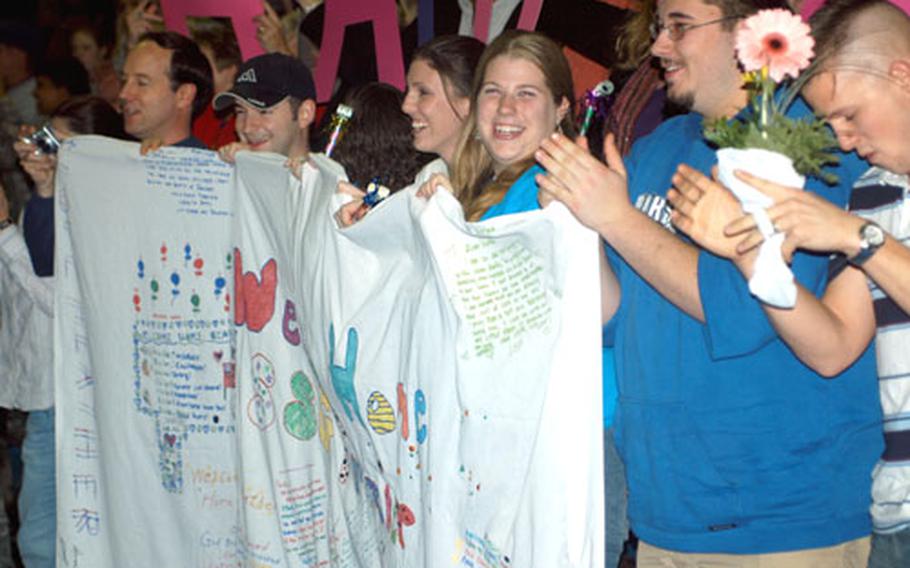 Can you spell "happy"? Some 300 family members and friends of V Corps Headquarters and Headquarters Company waited two hours in the gym on Patton Barracks for their returning soldiers, who&#39;d spent not quite a year in Iraq, then shouted with glee when they finally appeared. (Nancy Montgomery / S&S)

Can you spell "happy"? Some 300 family members and friends of V Corps Headquarters and Headquarters Company waited two hours in the gym on Patton Barracks for their returning soldiers, who&#39;d spent not quite a year in Iraq, then shouted with glee when they finally appeared. (Nancy Montgomery / S&S) 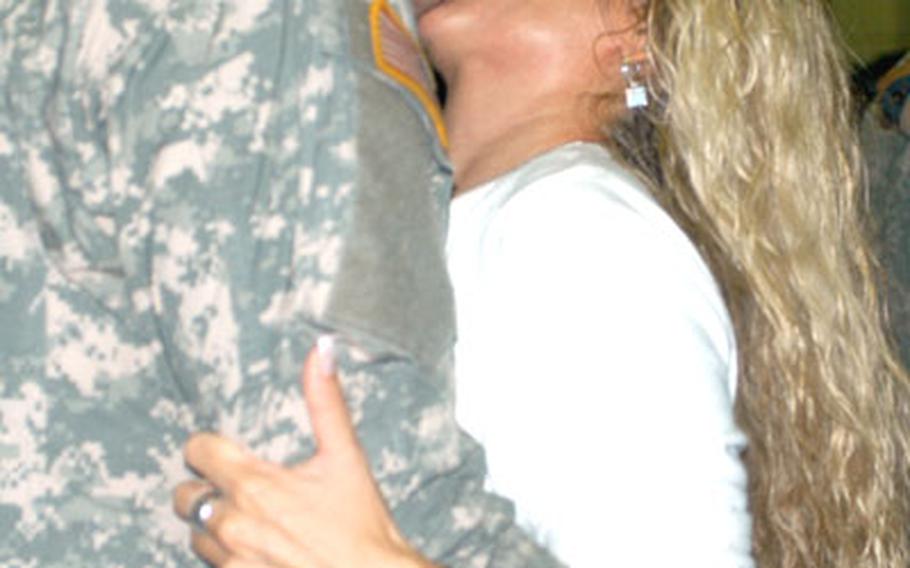 HEIDELBERG, Germany &#8212; Most had been waiting on the bleachers for two hours, after nearly a year of waiting at home, waiting at work, waiting while having dinner and vacuuming the floor.

So when the 200 or so soldiers of V Corps Headquarters and Headquarters Company finally marched in formation through the gym door, accompanied by the band playing &#8220;The Stars and Stripes Forever,&#8221; 300 wives, daughters, husbands, sons, siblings, mothers, fathers and friends turned the silence they&#8217;d known while waiting this past year into one long, loud, glorious roar.

It brought tears to tired eyes and cracked and broke the voice of Col. Jerry Olson, V Corps rear detachment chief of operations, as he gave the official and brief welcome-home speech about 11:15 Monday night in the Patton Barracks gym.

The group of 200 will be followed by two more within the next week or so, bringing all 700 of the corps&#8217; headquarters soldiers, as well as the V Corps Band, home safely by Christmas after not quite a year in Iraq.

No Headquarters Company soldier, who work mostly at desk jobs in administration and spent the year at Camp Victory, was killed in Iraq, either in this deployment or the previous one in 2003, a V Corps spokesman said.

Yet while they were gone, two company soldiers &#8212; a young PFC and a specialist, both women &#8212; who had stayed in the rear were killed after being hit by a train at a station east of Heidelberg.

But last night&#8217;s ode to joy had everything to do with the living after what had been a difficult year for many people.

Likewise, Alicia Kinsey, wife of a sergeant major, had not had an easy time. Her family had never done an overseas tour after 24 years in the Army, and her husband had retired &#8212; and then was called back so he could be sent to Iraq.

The unit had been under the command of Lt. Gen. Peter Chiarelli in Iraq as part of Multi-National Corps Iraq. Their former V Corps commander, Lt. Gen. Ricardo Sanchez, retired Nov. 1.