V Corps Commander Lt. Gen. William S. Wallace, with the help of interpreter Sgt. Daeman Harris, talks with a leader at a market in the Hi-Salam area of northwest Baghdad. (Marni McEntee / S&S) 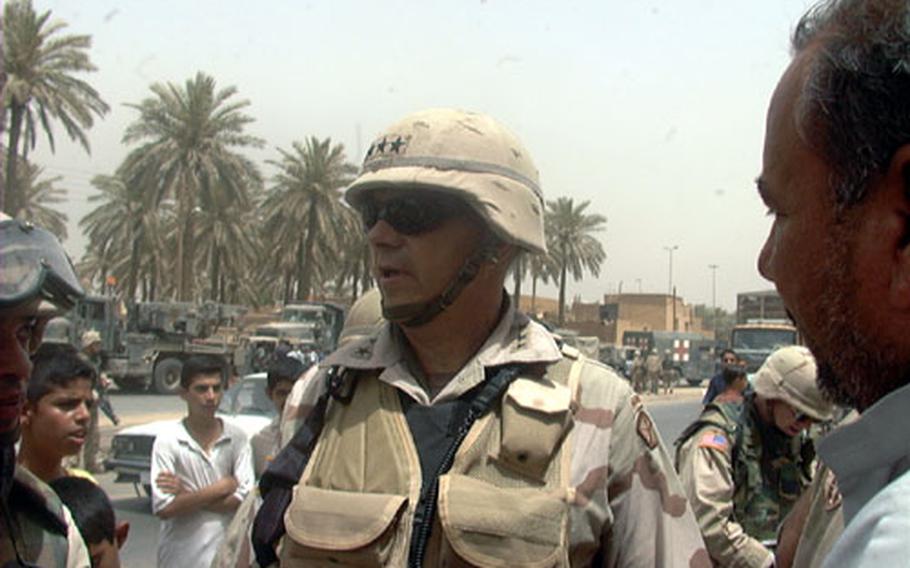 They wanted more security, trash removal, steady electricity and water service and increased fuel supplies. In short, they wanted the dividends of peace.

&#8220;The same things you and I want,&#8221; Wallace said Thursday after visiting the neighborhood a second time.

After four days of planning, Wallace had Army engineers on the ground in Hi-Salam to clean the streets and medics to treat the sick. The soldiers hired Iraqis to help shovel away putrid, fly-ridden trash piled on a concrete road divider.

It was a start, said Wallace, the Heidelberg, Germany-based commander of roughly 125,000 troops in Iraq, including more than 30,000 soldiers in Baghdad.

But there is still much to be done in the city of 5 million people.

Violent and petty crimes are the biggest menace in Baghdad, particularly at night. An 11 p.m. curfew leaves only the scofflaws in the street, many bearing weapons whose staccato bursts punctuate the night.

U.S. military police patrol the city, but they only recently started nighttime patrols and have yet to conduct foot patrols because of security concerns.

In Hi-Salam, a Shiite neighborhood in northwest Baghdad, many parents haven&#8217;t sent their young children back to school for fear of violence, said Sgt. Daemon Harris, Wallace&#8217;s interpreter. Teachers who left during the war haven&#8217;t returned.

Wallace has visited one other zone, the Shiite-dominated Saddam City, in his first &#8220;walkabout,&#8221; as he calls it. But the people grew too unruly and further trips were postponed, Harris said.

Hi-Salam seemed like a place the commander could get some visible work done.

Flanked by his weapon-toting personal security detachment, Wallace strode along the main boulevard Thursday, stopping to shake hands with Iraqi merchants. A swarm of children made the general the leader of their parade, as they sang songs, whistled and clapped along a boulevard lined with trash and debris.

He visited leaders of the clean-up squad and the medics, who would likely be in the neighborhood for three days. Twenty Iraqis had been hired to help shovel trash.

&#8220;We decided that if we went into the neighborhood willing to help them help themselves, then we ought to be willing to work alongside them,&#8221; Wallace said.

The Army brought 25,000 shovels from an abandoned Iraqi military warehouse, and bought hundreds of pairs of work gloves. When they leave, some of the shovels and gloves will stay behind, Wallace said. The rest will be taken to other neighborhoods for similar projects.

Wallace stopped to talk briefly to Batul Sadiq, headmaster of an empty grade school. He then went into a market to talk with Ali Al-Ush, a neighborhood leader, who gave the general a cold glass of water to slake the furnace-like heat, which topped 105 degrees.

Asked what the Iraqi said about the soldiers&#8217; work just outside his shaded fruit market stand, Wallace replied, &#8220;He said thanks.&#8221;

Whether the cleanup and the general&#8217;s visit will make a lasting impression on the people of Hi-Salam remains to be seen.

While soldiers were still shoveling trash into trucks, Sgt. Jess Martin, leader of the general&#8217;s security team, noted: &#8220;I gave a kid a piece of gum and he threw the wrapper on the ground. I made him pick it up.&#8221;