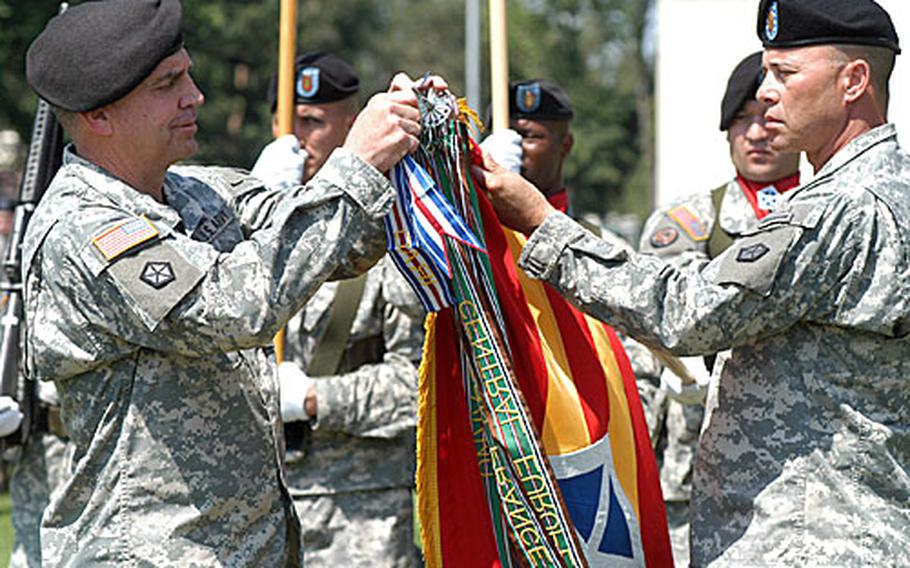 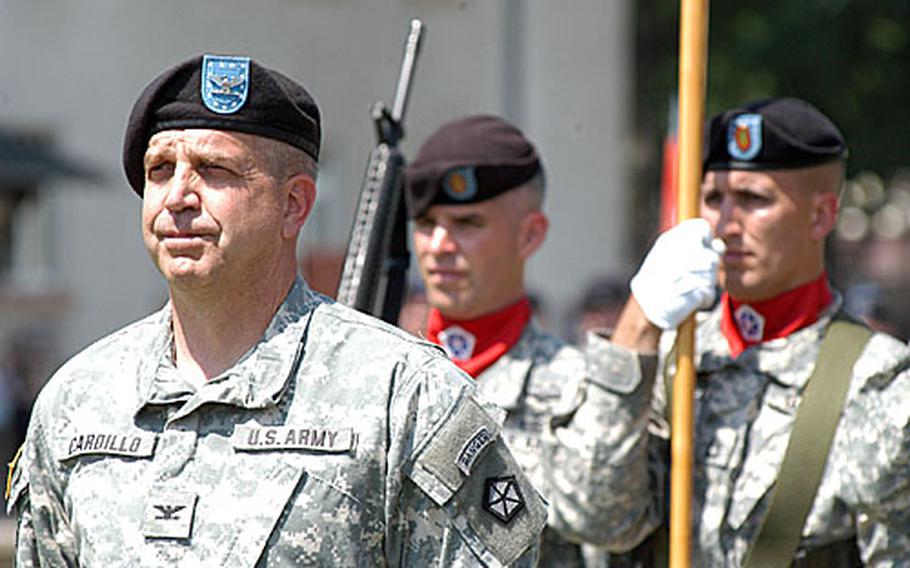 Cardillo Jr. stands at the head of the formation Thursday at an inactivation ceremony for his unit. V Corps Artillery, which traces its lineage back to May 13, 1921. (Matt Millham / S&S) Cardillo Jr. holds the colors as they are furled, perhaps for the last time, during the unit&#39;s inactivation ceremony Thursday at Tompkins Barracks. (Matt Millham / S&S)

SCHWETZINGEN, Germany &#8212; Col. Richard G. Cardillo Jr. had about 27 years of field artillery experience when he deployed to Iraq as commander of V Corps Artillery in January 2006, but rarely did he ever get to send rounds at the enemy.

The rest of the time he and his crew of about 170 soldiers were engaged on the softer side of the war, using words rather than high explosives to influence the Iraqis &#8220;to do the right thing,&#8221; he said.

He admits it wasn&#8217;t a traditional field artillery mission, but says he didn&#8217;t expect the news he got while downrange last year: V Corps Artillery was going to inactivate.

Cardillo stood on the parade field at Tompkins Barracks on Thursday with nearly all that was left of his unit &#8212; two platoon-sized elements.

In its heyday during the Cold War, V Corps Artillery had two full field artillery brigades consisting of 10 battalions. In World War II, the unit took part in Operation Overlord and the Battle of the Bulge and &#8220;helped achieve the greatest military victory in the United States&#8217; history,&#8221; Brig. Gen. Donald M. Campbell Jr., deputy commander of V Corps, said in a speech at the ceremony.

Cardillo said he was saddened by the inactivation after having served as its commander the last three years, but that was mitigated, he said, &#8220;by the knowledge that the field artillery of the Victory Corps furled its colors for the last time without ever having been bested on the battlefield.&#8221;

He acknowledged the Army&#8217;s reason for inactivating units like his, saying that by doing so &#8220;we take the precious leaders and soldiers of this outstanding unit and place them where they can have a greater impact on the Army.&#8221;

A group of about 42 corps artillery soldiers already have moved over to V Corps headquarters as a fire support element &#8212; a traditional field artillery job &#8212; to handle the corps&#8217; continued need for artillery assets. That cell will grow, he said, to include more people and more capabilities such as information operations, psychological operations and electronic warfare.

Field artillery units still are needed at some point in the conflict, he said, but at some time you have to put that away and focus on rebuilding and getting people back on their feet.