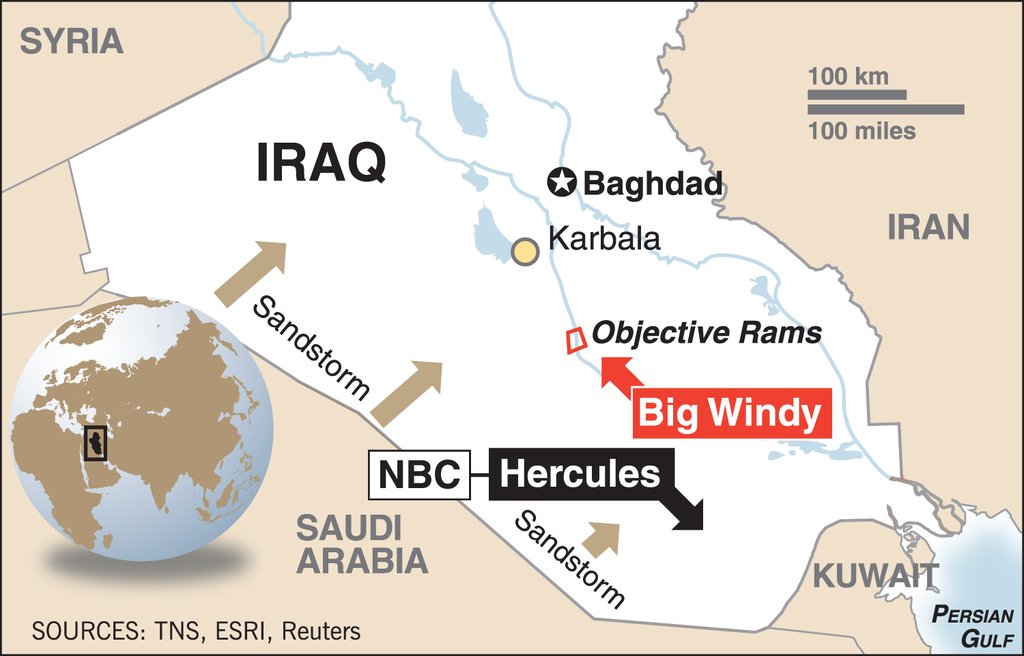 NBC News anchor Brian Williams has told a war story over the years since the 2003 invasion of Iraq. It grew to where he was claiming to be on a Chinook helicopter that was forced down after taking rocket-propelled grenade and small-arms fire.

In his on-air apology Wednesday, he backed off that, but said that he “was instead in a following aircraft.”

Soldiers who were in two Chinook companies say he was not in, nor ever near, a helicopter that was being fired upon:

“I can say with 100 percent certainty that no NBC reporters were on any of the aircraft.”

— Jerry Pearman, a veteran who was a lieutenant colonel and the mission commander when one of the three Chinooks in Big Windy Company came under rocket and small-arms fire

“This is etched pretty well into my brain … We had just entered the battle so that was Day 1 for us.”

“Over the years it faded and then to see it last week it was I can’t believe [Williams] is still telling this false narrative … He was definitely on those other aircraft.”

— Mike O’Keeffe, veteran who was the door gunner on the Big Windy Company Chinook hit by rocket-propelled grenades and small-arms fire

“It is not about the glory or anything. There are people who did things that day … To go out and talk like you were on that aircraft — and [Williams] wasn’t — and not acknowledge what that [Chinook] pilot did [to keep the crew safe] is horrible.”

“From my knowledge, [Williams] was riding on another flight of Chinooks that were transporting bridge parts.”

— Lance Reynolds, veteran who was the flight engineer on the Big Windy Company Chinook hit by rocket-propelled grenades and small-arms fire

“When we saw Brian Williams, we were miles and miles away from where the engagement happened.”

“Like I said, it was at least a half hour later [after the attacked helicopter’s emergency landing] … a ramp opened and I remembered seeing news crews coming out of the Chinook that just landed.”

“There was no need to polish the story by saying, ‘I was on the aircraft that took fire.’ I don’t know how he could have mistaken that … I don’t think it was a mistake he made at the moment.”

“It was something personal for us that was kind of life-changing for me. I’ve known how lucky I was to survive it. It felt like a personal experience that someone else wanted to participate in and didn’t deserve to participate in.”

“I can see how it would be appealing for him to add a little to the story. I’m sure it sounded good when he pitched it.”

“They [Williams and the NBC crew] recorded everything we were hearing about this aircraft being shot down.”

— Sgt. 1st Class Joseph Miller, a Chinook platoon sergeant in Germany who was the flight engineer on the helicopter carrying Williams and the NBC crew

“Soon after we passed them [the three Chinooks in Big Windy Company] they got shot down.”

— David Luke, a veteran who was a flight engineer on one of the Hercules Company helicopters flying on the mission carrying Williams and NBC

“I have a feeling that [Williams] didn’t have a choice [but to apologize] … I don’t think it would ever of happened [otherwise]. He would have told that war story until he was on his dying bed.”

“I think it wasn’t enough for [Williams] and he needed to put a little more of a twist on it.”

“When we arrived at Objective Rams, [there was] a CH-47 from the “Big Windy” unit out of Germany. After landing, we learned that the parked aircraft had received small-arms fire and had been hit with an RPG ... We were not flying ‘behind’ them. Our missions were completely separate.”

— Chris Simeone, pilot in command of the flight that carried Brian Williams, in an Op-Ed in the New York Post

As US troops leave Afghanistan, rescued dogs and cats go with them

The girl in the Kent State photo, and the lifelong burden of being a national symbol

Chauvin guilty of murder and manslaughter in Floyd's death