US identifies first two US soldiers from Korean War remains 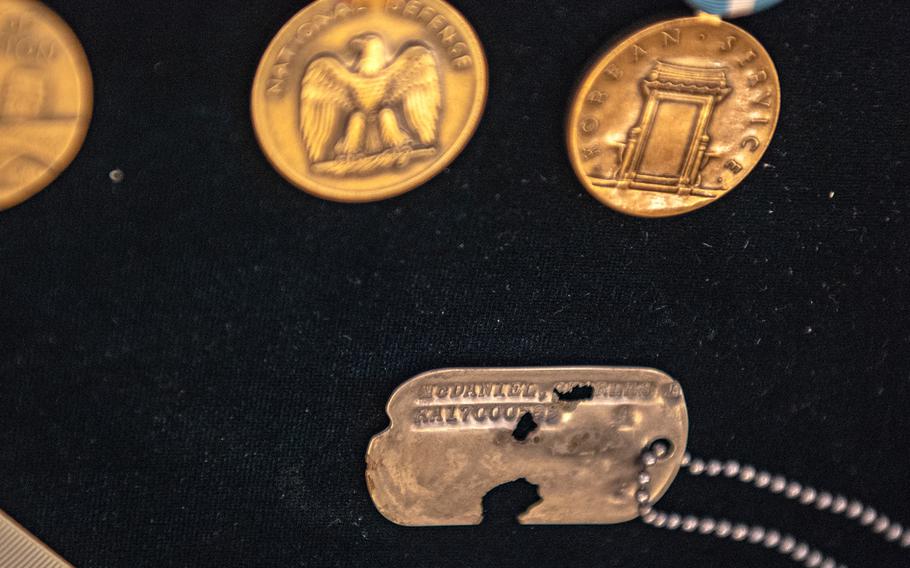 Buy Photo
The dog tag belonging to Army Master Sgt. Charles H. McDaniel, listed as missing in action during the Korean War in 1950, was among the 55 caskets of remains that North Korea handed over to the United States in July 2018. (Carlos Bongioanni/Stars and Stripes)

Buy Photo
The dog tag belonging to Army Master Sgt. Charles H. McDaniel, listed as missing in action during the Korean War in 1950, was among the 55 caskets of remains that North Korea handed over to the United States in July 2018. (Carlos Bongioanni/Stars and Stripes) 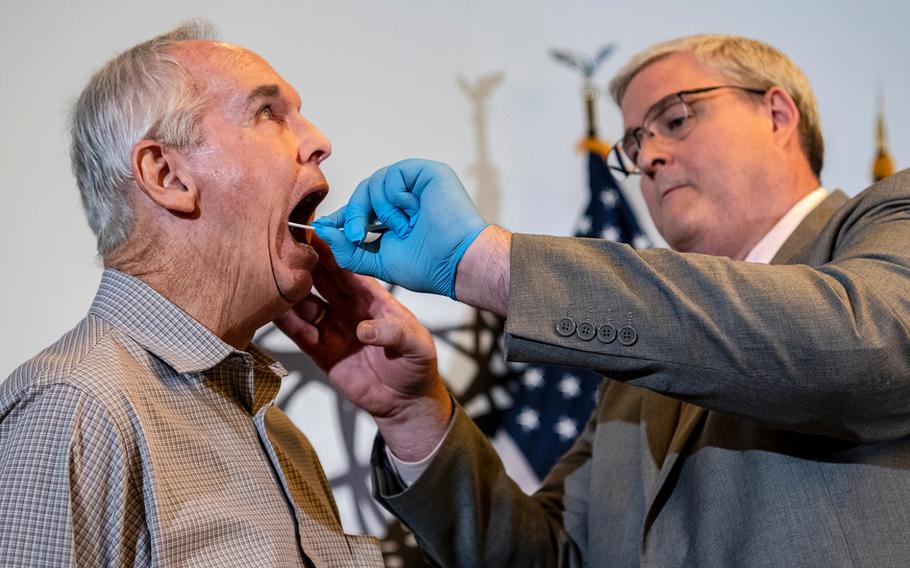 Buy Photo
Department of Defense DNA Operations Director Timothy McMahon swabs the inside cheeks of Larry McDaniel, the son of Army Master Sgt. Charles H. McDaniel, who was listed as missing in action during the Korean War in 1950. President Donald Trump announced Thursday, Sept. 20, 2018, that the remains of Master Sgt. McDaniel and a private first class from North Carolina were included in the 55 cases of remains of missing Korean War veterans turned over in July by North Korea. (Carlos Bongioanni/Stars and Stripes)

WASHINGTON — The remains of an Army master sergeant from Indiana and a private first class from North Carolina were included in the 55 cases of remains of missing Korean War veterans turned over in July by North Korea, President Donald Trump tweeted Thursday.

The two soldiers, both likely killed in action fighting Chinese forces in North Korea about 66 years ago, are the first positive identities that Pentagon officials have confirmed since the transfer was completed July 27 as part an agreement hashed out by Trump and North Korean leader Kim Jong Un during their summit June 12 in Singapore. Pentagon officials said more identifications would come in the future, but cautioned they had not confirmed precisely how many individuals are in the remains that were included in the transfer. Identifying remains can take years, even decades, in some cases.

Trump on Thursday identified Army Master Sgt. Charles H. McDaniel, 32, of Vernon, Ind., and Army Pfc. William H. Jones, 19, of Nash County, N.C., as the long-missing soldiers, in two tweets from his personal account. It marked an unusual method for the government to announce the identities, which are typically announced in formal news releases from the Defense POW/MIA Accounting Agency, which is in charge of searching for missing troops.

McDaniel and Jones “are the first American remains from ... North Korea to be identified as a result of my Summit with Chairman Kim,” Trump wrote. “These HEROES are home, they may Rest In Peace, and hopefully their families can have closure.”

Pentagon officials earlier Thursday said the families of the two missing servicemembers had been notified last week of their identifications. McDaniel’s identification was positively confirmed Sept. 12 and Jones’ a day later, a DPAA official said.

McDaniel’s family had already been notified his dog tags were included in the 55 cases of remains. Pentagon officials said those identification tags were the only personal artifacts that could be traced back to an owner included among the cases transferred by the North Koreans.

McDaniel was a medic who also fought in World War II and had been awarded a Bronze Star.

He went missing Nov. 2, 1950, while serving with the 3rd Battalion, 8th Cavalry Regiment just southwest of the North Korean village of Unsan, according to DPAA. Another member of his unit, after McDaniel could not be found, reported McDaniel was believed to have been killed in action while fighting against Chinese People’s Volunteer Forces.

“We were very small children,” said McDaniel Jr., who retired as a colonel. “We certainly were not anticipating [receiving the dog tag]. We really, in some sense, are fortunate.”

Jones went missing a few weeks after McDaniel. A member of the Army’s 2nd Battalion, 24th Infantry Regiment, 25th Infantry Division, Jones was engaged with Chinese People’s Volunteer Forces near Pakchon, North Korea,during the Battle of the Ch'ongch'on River when he went missing on Nov. 26, 1950, according to DPAA. He was believed to have been killed in action.

Some 7,700 American servicemembers remain missing from the Korean War, according to the DPAA. The agency believes about 5,300 servicemembers’ remains are in North Korea.

The transfer of remains July 27 was the first in more than a decade. Pentagon officials hope to negotiate to receive additional remains from North Korea in the near future or to restart joint searches for American remains that were disbanded in the 1990s. Those operations would place American troops – without weapons or military uniforms – on North Korean soil to search for missing troops remains alongside North Korean personnel.

Kelly McKeague, DPAA’s director, said Thursday that he hoped those negotiations would begin in October.

“DPAA remains fully prepared to resume recovery operations in the [North Korea], and looks forward to the continued fulfillment of the commitment made by President Donald Trump and Chairman Kim Jong-un on the return and recovery of U.S. servicemen in North Korea,” DPAA said in a prepared statement.