US acts to end drunken driving on Okinawa 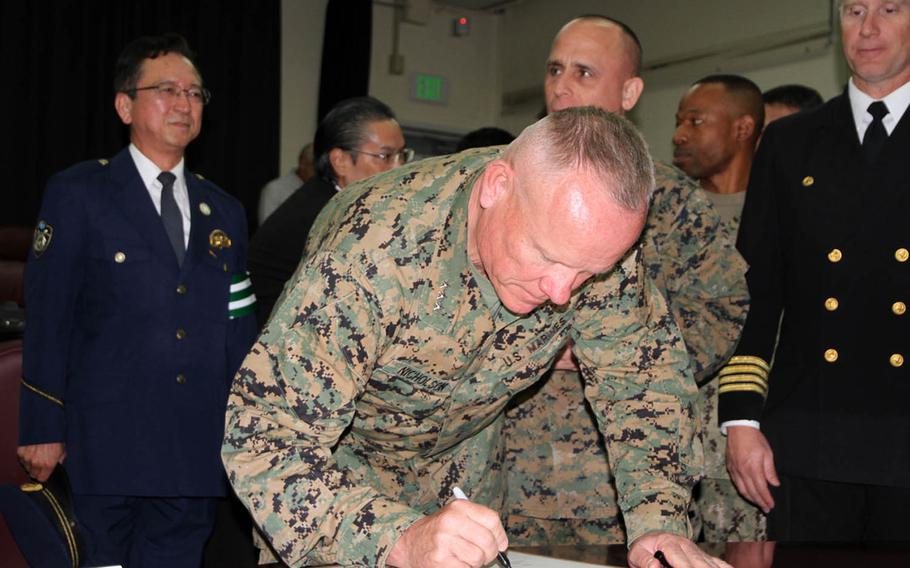 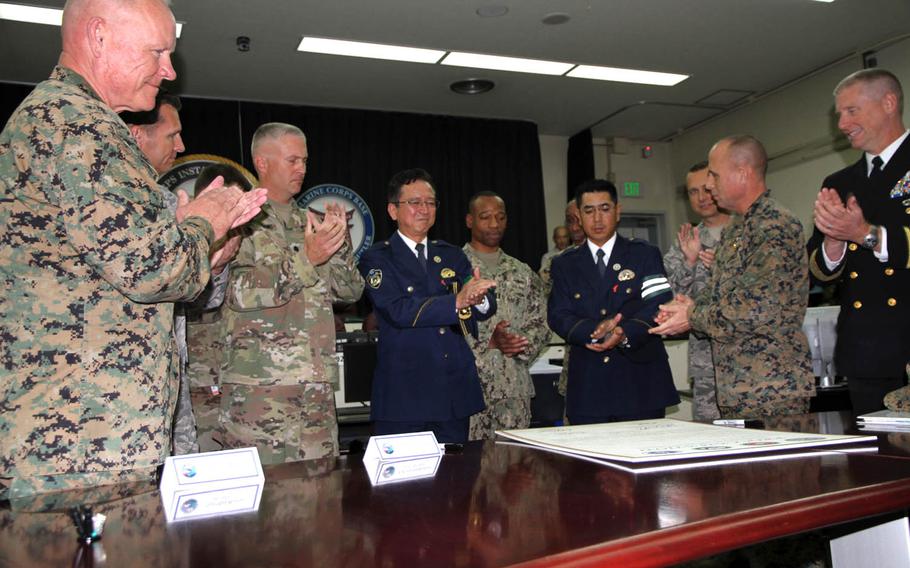 CAMP FOSTER, Okinawa — With a pen as his weapon, Lt. Gen. Lawrence Nicholson took aim Tuesday at eliminating drunken driving on Okinawa. History shows that is easier signed than done.

The III Marine Expeditionary Force commander and leaders from each branch of service on the island signed a proclamation announcing the “Drugged and Drunk Driving Awareness and Prevention Campaign” that will last through the holiday season and into the new year.

It urges military commanders and civilian supervisors to promote awareness of why people drive impaired, support programs and policies to reduce the problem, and promote healthier and safer activities.

“I can tell you that although the numbers are down this year, we still will not rest. We will continue to work very, very hard because one is too many, and we have an obligation to ourselves and to the citizens of Okinawa to eliminate all cases of drinking and driving,” Nicholson said.

While the military has succeeded in reducing other crimes by servicemembers, their dependents and civilian workers — cutting the rate well below that of the general Okinawan populace — drunken driving has remained relatively steady in recent years and has kept up with or surpassed the local community, which has had Japan’s highest number of drunken driving crashes for decades.

Experts say the Marine Corps has been doing the right things, but that it is impossible to eliminate the problem — it speaks more to people’s fallibilities than to the failings of command leadership to get troops to follow orders. However, the campaign is a positive step, Okinawan police said, because each drunken-driving incident inflames residents who have become increasingly agitated about the 50,000-strong U.S. presence on the small Pacific island.

“One incident, even a minor one, is an obstructive factor to the cooperative strategic relationship between Japan and the United States; each one of them damages the smooth strategic relations little by little,” said Kazuya Sakamoto, professor of international politics and Japan-U.S. relations at the Graduate School of Law and Politics of Osaka University. “When minor cases are repeated, they will gradually diminish tolerability of the public.”

That is the case on Okinawa.

The problem The overall crime rate since 1972 has been about seven crimes per 1,000 people locally and 2.75 among the U.S. military community. But the number of alcohol-related incidents is almost even, and that’s what catches the attention of Okinawans and the media.

On March 13, Navy Seaman Apprentice Justin Castellanos was charged with the alcohol-fueled rape of a Japanese woman.

In May, police arrested civilian base worker Kenneth Gadson Shinzato, a former Marine, in the slaying of a local woman. The incident does not appear to be alcohol-related, but it fueled the fire against the military as protests intensified.

In June, during a period of mourning for the slain woman, a Navy petty officer drove the wrong way down a highway, crashed into two vehicles and injured three people. Her blood-alcohol content was several times over Japan’s legal limit. The fact that the incident occurred during the solemn mourning period enraged locals.

There were more alcohol-fueled assaults and arrests in August. Alcohol-related arrests occurred in every subsequent month as well, including two DUI incidents last weekend.

Okinawan police say they believe one of the biggest problems is day-after driving, when people suffer from hangovers.

“Many people tend to take what we call ‘hangover driving’ lightly,” said Mitsuru Araki, a spokesman for the Okinawa prefectural police’s traffic planning section. “Alcohol is not out of your system just because you have been asleep a while.”

The impact Living on Okinawa means being under a microscope for U.S. servicemembers.

“The United States Marine Corps, being in Okinawa, we’re ambassadors,” said Marine Col. David Jones, deputy commander of Marine Corps Installations Pacific. “Any incident that happens with the U.S. military becomes a distraction to your positive influence within that community itself and the Marine Corps is very sensitive to that.”

Robert Eldridge, an academic and former deputy assistant chief of staff of government and external affairs for the Marines in Okinawa, believes crime by U.S. servicemembers has a direct and indirect impact on U.S.-Japan alliance objectives in Okinawa, with less effect on relations with Japan at large.

Incidents can affect Okinawa elections, as shown by Gov. Takeshi Onaga’s 2014 victory on an anti-base platform, or delay projects like the effort to relocate Marine Corps Air Station Futenma to the island’s remote north.

While polling data from the local Ryukyu Shimpo newspaper suggests the majority of Okinawans support the U.S.-Japan alliance, the same polls suggest they are overwhelmingly against the relocation within Okinawa.

The U.S. military, their families and civilian support personnel “are held to a higher standard and a double standard,” Eldridge said, referring to the local crime and drunken-driving numbers. “The fact that we can’t get it right is what is so distressing.”

Masaaki Gabe, professor of international relations at the University of the Ryukyus, sees the impact of alcohol-related incidents.

“The U.S. military has tightened its regulations to the greatest extent possible, and for the military and Japanese government, those routinely occurring incidents are within an acceptable error range,” Gabe said. “For Okinawan people, they are a matter of daily occurrence. In this era of the internet, news of even a small incident spreads not only to the mainland but to the world, and this news accumulates into people’s minds.”

The solution? Alcohol has a long-storied history in military culture and lore — from the “Drunken Sailor” sea shanty to Bastogne Airborne beer to the Vietnam-era debauchery in Southeast Asia.

Servicemembers are trained to be aggressive, tough and strong, then they are told not to be those things when the uniform comes off. That often translates into testing one another through the bottle.

Alexis Nager, a research associate with the National Center on Addiction and Substance Abuse, said one challenge in extrapolating causation with drinking and the military is that the research is limited.

She said that surveys have shown more military members report drinking than college students, yet fewer drink and drive. These reports are less than scientific.

“One survey of military members found that 89 percent reported that their peers drink alcohol,” Nager said.

Eldridge said he did not want to attack the U.S. military because most servicemembers are law-abiding, and he didn’t want to attack alcohol, but he wonders whether the service branches tacitly encourage consumption. “The military has a culture that glamorizes alcohol,” he said. “They talk about the importance of not drinking and driving, but alcohol is pervasive at events they sponsor. Servicemembers shouldn’t be kept in a cage but there should be more self-policing.”

Satoshi Omichi, chairman of the Kin Town Bar Owners’ Association and a local bar and art gallery owner, said the local communities and their American guests have a “good” relationship that has become symbiotic.

“U.S. servicemembers are (an) integral part of Kin Town’s nightlife,” he said. “When no Americans are around in the entertainment district, there are no Japanese either. A good community relationship may be important for the military but we, too, need Americans in our community. So we must work together.”

Bars often have to close for months if not years when there is a major crime perpetrated by U.S, servicemembers leading to liberty restrictions.

“There are Japanese drivers who break laws too, but when it comes to a case involving a [U.S.] servicemember, it makes him or her look extra bad,” Omichi said. “It suddenly strains the relationship between the local community and the military.”

Jones said the Marine Corps has primarily focused on education and training. They have posted off-duty Marines holding signs around bases and hollering to fellow Marines as they leave base.

They have partnered with Japanese police on anti-drunken driving initiatives and introduced mandatory education classes, surprise sobriety checkpoints and roving foot patrols of area bar districts. There are yearly classes on responsible drinking, and leaders actively take interest in their Marines, offering trips and base-sponsored activities that do not involve alcohol.

Jones said it is impossible to stop all crime among the 50,000 SOFA personnel in Okinawa.

“I don’t think there is any one thing you can pinpoint and say, ‘Aha that’s it. That’s the true culprit,’ ” Jones said. “If it was, we would have gotten to that, not only in the military but in the United States as a whole.”

Nager suggested that the U.S. military continue to look for ways to identify and reach at-risk groups. She said strictly punitive programs do not work. She recommended health-focused programs, which have proven to be the most effective, coupled with sobriety checkpoints, public education and mass media campaigns, most of which the Marines already do.

“Rather than reinventing the wheel, the military would benefit from examining the existing large body of research on this issue and putting in place programs, policies and initiatives that are supported by the research.”