Urasoe’s war against fat fought on land, in water 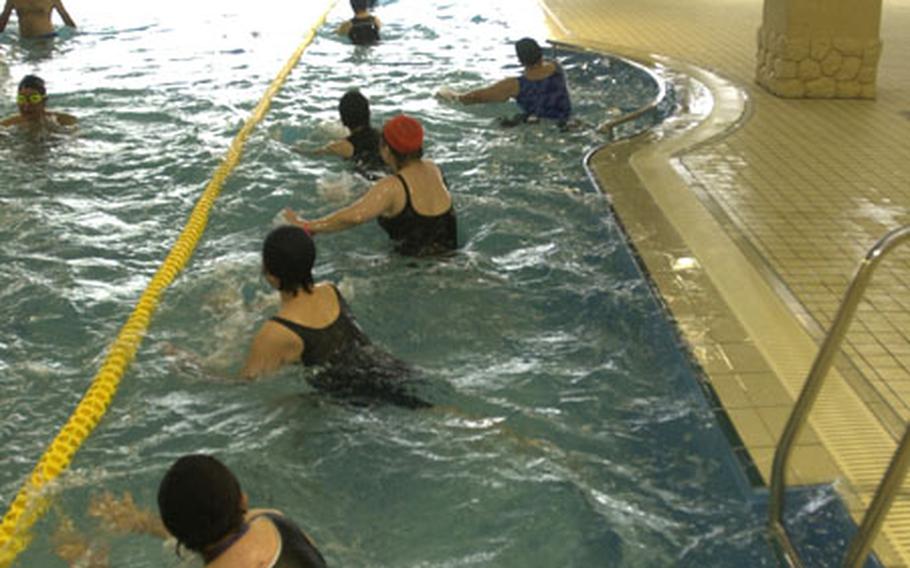 While Dr. Makoto Suzuki sat in his Okinawa International University office worrying about the island&#8217;s unhealthy fast-food obsession, Aiko Suzuki, who is not related to him, was busy cooking up a batch of fried chicken in the school&#8217;s busy cafeteria.

Fried chicken and hamburgers are students&#8217; favorites, said the cafeteria manager, &#8220;especially fried chicken.&#8221; However, she said, students are not totally indifferent to health.

Perhaps it&#8217;s because after years of exposure to Dr. Suzuki&#8217;s research on the island&#8217;s traditional healthy diet and culture, students absorb some of his teaching.

Then again, the aroma of burgers frying on the grill is hard to ignore.

At Majun Land, a Urasoe recreation facility that opened in January, the pool was alive with people stroking and kicking extra pounds away.

Since the indoor fitness center&#8217;s opening, an average of 200 people visit daily, said Taeko Katsumata, assistant general manger. It has five swimming pools, exercise and weight rooms and a Jacuzzi and conveniently is next to the city&#8217;s athletic park.

Michio Okumoto, 66, a city council member, was one of the few men swimming on a recent weekday.

He said he spends about 2.5 hours at the pool daily and has lost about three pounds so far.

On a Marine base

Ryoko Contrevas was sitting with her husband, Simon, a retired Marine, at a Popeye&#8217;s.

&#8220;At home we eat mostly Japanese food,&#8221; she said, glancing apologetically at the fried chicken on the table. She said she changed her husband&#8217;s diet when they married 31 years ago but they&#8217;d just finished banking nearby and Popeye&#8217;s was tempting.

Ryoko said she always ensured a healthy Japanese meal was on the family table at 5 p.m. daily &#8212; a tradition carried on by her daughters in California. &#8220;They even cook goya [a bitter Okinawa squash] over there,&#8221; she said.

At a nearby Burger King, Yuko Cross, the wife of Navy Petty Officer 1st Class Nielson Cross, was having lunch with their three children.

Avoiding American fast food is hard, she said, but they try. &#8220;About two-thirds of our dinners are Japanese dishes," she said. She said that her husband of nine years now eats most of Japanese food &#8212; except natto, fermented soybeans and tofu.

With a little kitchen magic she also is able to slip in healthy ingredients he does not like, such as tofu.