Uphill battle to win over villagers in Tangi Valley 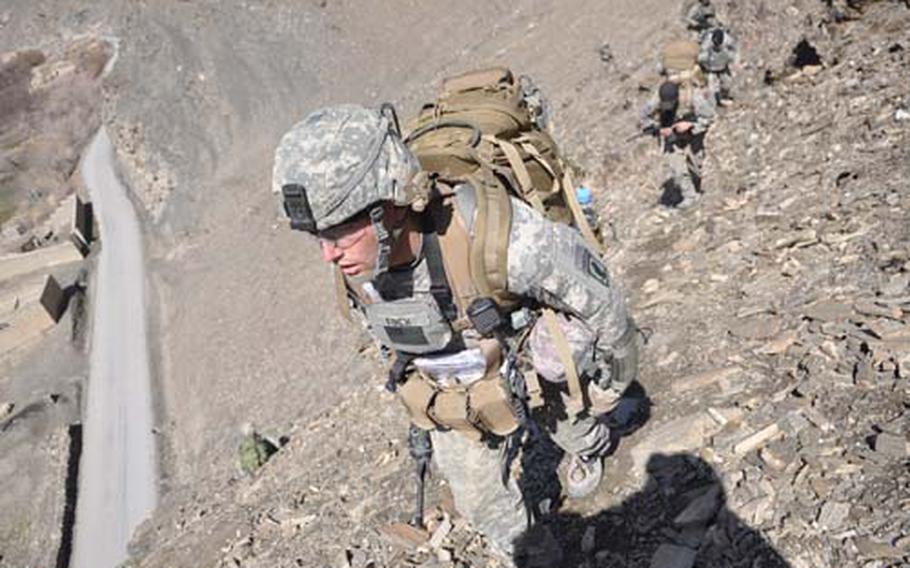 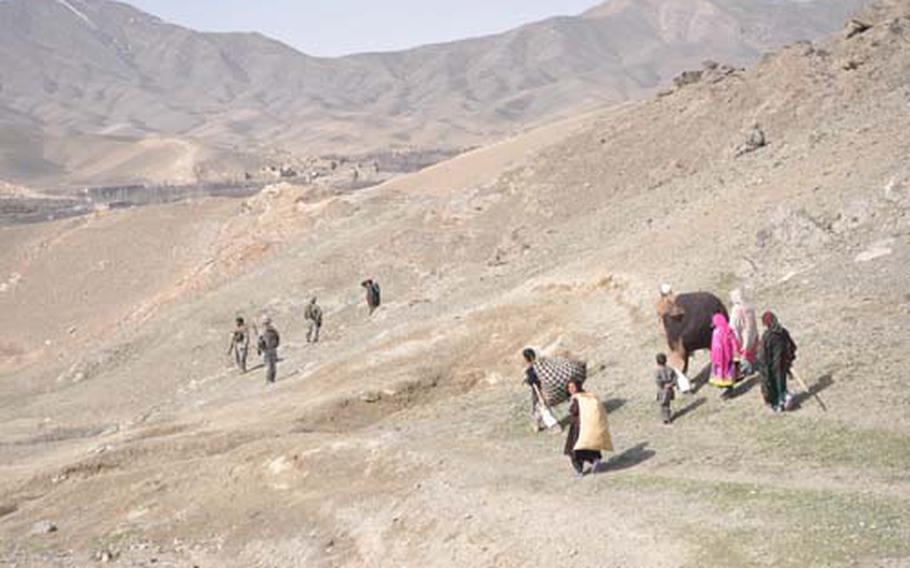 Villagers walk by a patrol of U.S. and Afghan soldiers in the hills above Wardak province’s Tangi Valley. (Heath Druzin/S&S) 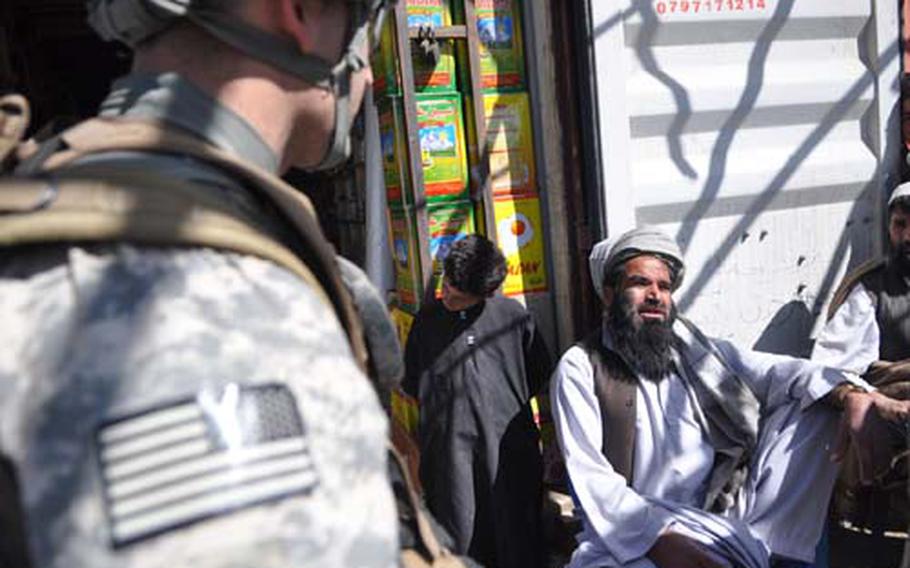 503rd Infantry Regiment talks to villagers in the Tangi Valley. As on most patrols, he gets a dubious response when he asks the villagers for help combating the Taliban. (Heath Druzin/S&S) 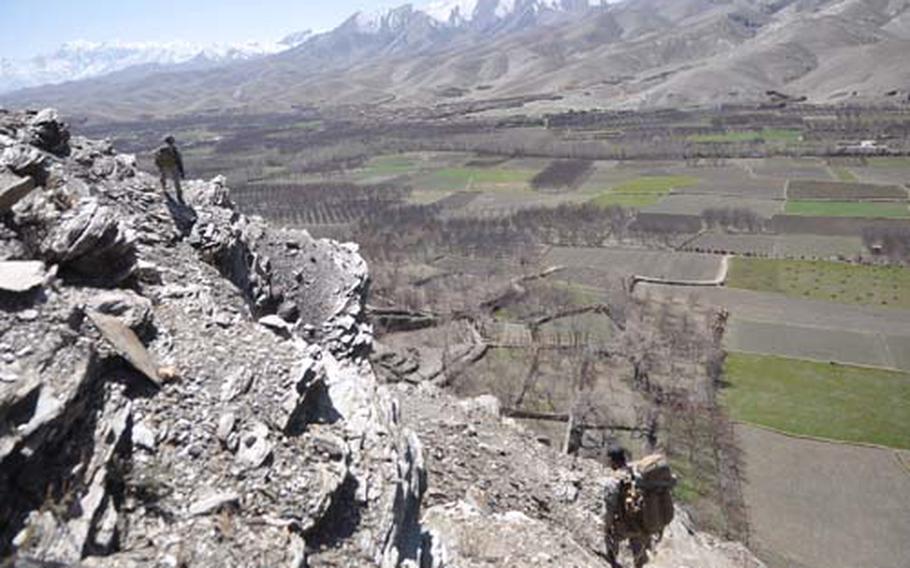 SAYYIDABAD DISTRICT, Afghanistan &#8212; Since arriving in December, soldiers in this district&#8217;s rugged, deadly Tangi Valley haven&#8217;t fired a shot. They haven&#8217;t kicked in a door, haven&#8217;t searched a house. The two Afghans they detained were released two days later.

They take off their helmets to talk to villagers, shake hands, sit down for tea with them, write down their concerns.

In short, they&#8217;re carrying out exactly the kind of velvet-glove counterinsurgency operations Gen. Stanley McChrystal is banking on to turn the tide of a war badly adrift more than eight years after it began.

As U.S. forces flood southern Afghanistan with troops, backing up the soft touch of counterinsurgency with brute force in Taliban strongholds like Marjah, troops in eastern regions such as Tangi Valley find themselves with the unenviable task of trying to persuade villagers to disavow the Taliban without having the forces to offer lasting security.

Villagers in this volatile region, where insurgent fighters pour in from across the Pakistan border each spring, express an almost universal sentiment about the soldiers: fear.

Another chimes in with an oft-repeated phrase alluding to reprisals by the Taliban for talking to coalition troops.

First Lt. Michael Finch tells the men he wants to help, but that he needs their assistance in getting rid of the Taliban that threaten the villagers.

North of Tangi in eastern Nerkh district, another company from the 173rd Airborne Brigade, 1st Battalion, 503rd Infantry Regiment is having similar issues. Soldiers there have good relations with the villages within a few miles of their small combat outpost, but in the western part of the district, with an estimated 30,000 residents, insurgents have more or less free rein. Capt. Kirby Jones admits that with just one company for a vast, mountainous area, he simply doesn&#8217;t have the forces to do more than the occasional incursion into that area.

Without an additional company, or about 150 soldiers, he&#8217;ll have to just focus on the villages in the immediate vicinity of his combat outpost.

One of the most persistent complaints is that promised projects are never realized. At a meeting late February at Forward Operating Base Airborne in Maidan Shahr, Wardak province&#8217;s capital, attended by about 60 provincial elders, the mood was tense.

&#8220;I am unhappy with you,&#8221; one elder from the Tangi Valley said, addressing American commanders. &#8220;You guys made us untrustworthy in the eyes of our people. We always talk to you about development in the Tangi, but nothing is happening.&#8221;

Reaching out to villagers in the Tangi Valley, south of Nerkh in Sayyidabad district, is backbreaking work. The main roads are riddled with bombs, the flat farmlands with booby traps. So soldiers weighed down with heavy body armor and packs follow the steep ridge lines on either side of the valley, trudging miles over loose rock, up and down mountains, to find the safest path to the collections of mud-brick compounds that dot the district.

With one company operating out of a small combat outpost, the soldiers of the 173rd are left to shuffle one platoon around the valley to do combat patrols, where the terrain and extreme danger of driving severely limits their reach. When the soldiers pass through a village, the Taliban is often right there behind them to threaten locals.

First Lt. Luke Giese said it would take another company of soldiers to secure the valley and convince locals that the Americans are dedicated to their safety.

Villagers have been slow to trust the Americans, who say their sporadic presence is countered by Taliban members spreading anti-American propaganda or resorting to outright threats against anyone thinking of working with the United States.

The Taliban&#8217;s tactics appear to be working.

A long-planned farmers&#8217; shura, or meeting, held Saturday at the Afghan army compound next to Combat Outpost Tangi ended a dismal failure (the day of the previous planned shura for the area, two rockets were fired at the base). Two Afghan officials from the Ministry of Agriculture backed out at the last minute, citing fear for their safety, leaving no Afghans to preside over the meeting.

It was just as well: Not a single farmer showed, leaving a handful of American soldiers and a lone U.S. Department of Agriculture representative, sitting on otherwise empty benches in a stiff breeze, with folding tables full of unopened water bottles and unmade tea.

For some soldiers, the frustration is building as they see their toil coming to naught.