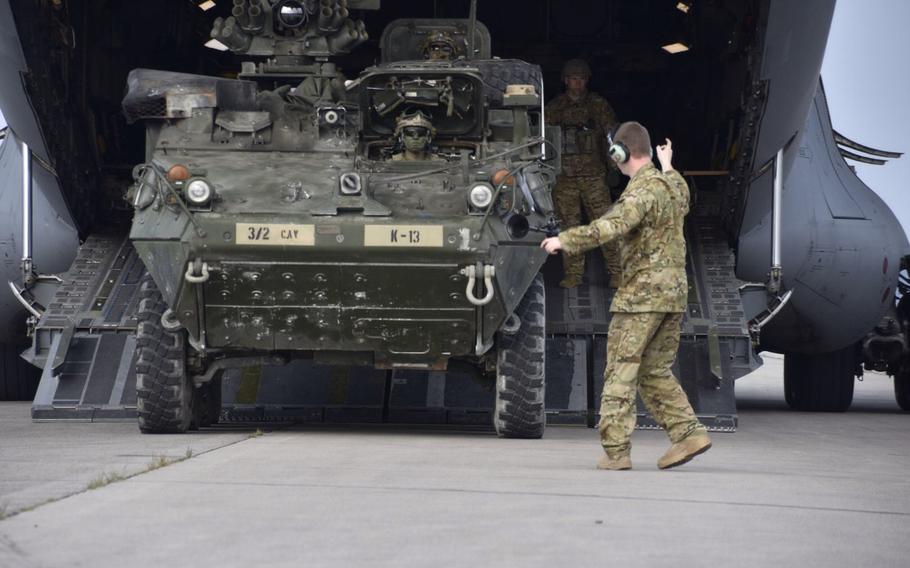 WIESBADEN, Germany — The 2nd Cavalry Regiment will begin fielding the first of a new fleet of upgraded Stryker armored combat vehicles next summer, the result of a two-year push to give the unit greater range and firepower in response to concerns about a more assertive Russia.

Half of the regiment’s new Strykers will come equipped with a 30 mm Bushmaster cannon, which boasts a range of more than 9,000 feet — far greater than the current M2 .50-caliber machine gun or Mk-19 grenade launcher.

“The main thing is better survivability in chance contact against an armored threat, with armored personnel carriers, and then also having a longer reach with direct-fires systems,” said Lt. Col. Troy Meissel, deputy commander of the 2nd Cavalry.

Even a Hilux pickup truck mounted with the Russian-made heavy machine gun such as the DShK — common in places like Afghanistan — has longer reach than Strykers as they’re currently armed, Meissel said. The DShk’s 12.7 mm armor-piercing round can penetrate 25 mm of armor, enough to destroy lightly armored vehicles.

The other half of the 2nd Cavalry’s Stryker fleet will be augmented later with a Javelin anti-tank missile system able to be fired safely from inside the vehicle.

The system, called a Common Remotely Operated Weapon Station-Javelin, or CROWS-J, allows gunners “better visibility from the sights of the Stryker to be able to see and fire under cover without having to deploy an individual and expose him,” Meissel said.

The decision to speed development of the upgraded Strykers was made in 2015, not long after the Russian intervention in the Ukraine. The intervention spurred NATO to enhance its presence along its eastern frontier.

U.S. forces soon realized that the machine-gun-armed Strykers were outclassed by the Russian BMP-3 tracked infantry fighting vehicle, which has a 100 mm low-velocity gun, or BTR-82 wheeled transporters with either a 30 mm auto-cannon or a 120 mm gun-mortar.

The upgraded vehicles are being tested at Aberdeen Proving Ground in Maryland, where a small group from the 2nd Cavalry, including Meissel, tried out the new equipment, including the Bushmaster cannon.

“We were very impressed with the weapons system; it has a very high reliability, in terms of a low number of malfunctions,” he said. “It’s easy to operate, easy to maintain.”

The regiment will receive four of the upgraded vehicles in January to use for training crews, Meissel said.

Currently, there are four multinational battle groups in the Baltic states and eastern Poland, including an 800-soldier squadron from the 2nd Cavalry.

The regiment is one of only two full-time combat units stationed in Europe, neither of which possess tanks. A U.S.-based armored brigade also is on rotation to augment the Army in Europe, where permanent troop numbers have declined sharply since the Cold War.

In January, the 3rd Armored Brigade Combat Team, 4th Infantry Division, deployed to Europe, where it is serving as the first brigade in what the Army calls its “heel-to-toe” rotational presence.

“This doesn’t make us want to fight tanks,” he said. “It doesn’t change how the organization fights in terms of our most important weapons system ... (which is) our 108 rifle squads that come out of the back of the Strykers in the regiment. This helps us move to a position of advantage to allow our infantry squads to dismount and fire and maneuver on the enemy.”