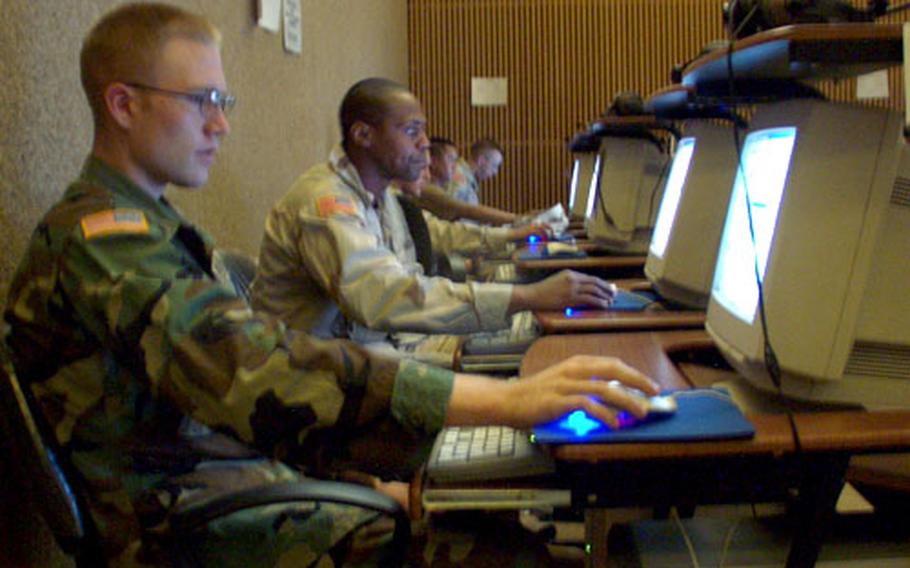 Soldiers with the 1st Armored Division’s 1st Brigade check their e-mail at an Internet cafe at Camp Martyrs Monument in Baghdad in August 2003. At that point in the war, the U.S. military wanted to set up 180 cyber cafes. Nearly five years later there will be 850. (Scott Schonauer / S&S)

STUTTGART, Germany &#8212; The number of public Internet sites on U.S. bases in Iraq and Afghanistan will increase during the next six months from 610 to 850, according to a Stuttgart- based contracting team.

DRS Technologies&#8217; European office, which is managing the project, is also increasing bandwidth at the bases to speed up Internet and phone service.

A 75-person team, most of whom work in Iraq, is also planning to place phone banks at passenger terminals, put wireless phones in hospitals for bedside calls and install hot spots on bases for laptop users.

The goal is to make telephone and Web connections for deployed personnel more like it is when they are home, said Glen Collins, senior program manager for DRS&#8217; global communications division.

&#8220;Others use e-mail or some form of chat, and there are a few Web cams installed out there. Sometimes those things don&#8217;t work so well, and that was sort of the experience some of these soldiers had been having.&#8221;

The program is part of a renewable contract between the military and DRS that could total $250 million over five years. A total of $47 million has been spent since October, Collins said. About 160 Internet sites &#8212; some small and some large &#8212; have been added over that time. Bandwidth also has been increased.

Many of the new Internet sites and upgrades are planned for smaller bases such as combat outposts. In the past, troops stationed at small bases often would have to wait in line to use the telephone or Internet &#8212; if they had access at all &#8212; or travel to larger bases to use the Internet and phone sites there.

All the upgrades are to unsecured Morale, Recreation and Welfare networks. Most are being done in Iraq; a smaller number of new sites and upgrades are planned for bases in Afghanistan and the Balkans.

Collins spoke of a site in Afghanistan, for example, that was designed to accommodate 20 laptops but was found to have 30 or more additional laptops jury- rigged to the site&#8217;s local network. That slowed the speed, he said, but also indicated a demand for more &#8220;throughput,&#8221; or capacity of digital data.

To support the transition to the new network, DRS is increasing its staff in Iraq from 22 to 47 field technicians who would work under an in-country supervisor. They would manage a system that would increase over the next six months from 360 million bits per second to more than 700 Mbps.

In November 2004, 20 months after the March 2003 U.S. invasion of Iraq, there were 178 Internet sites at U.S. bases there and 450 by last September. There are currently 610 Internet sites, and DRS has purchased equipment for 345 more, at least 200 of which are planned to be installed by the end of summer.

He said that the wider network can be adjusted as needs change in Iraq and Afghanistan, as well as when needs arise in Africa, Eastern Europe and Southwest Asia, which are areas of responsibility for the Stuttgart-based U.S. European Command.