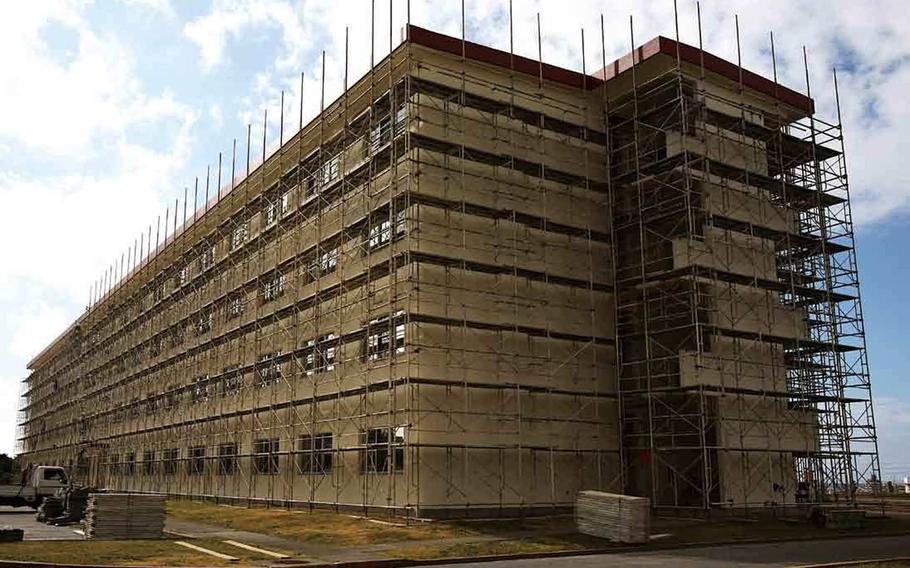 Scaffolding for a painting project surrounds a barracks building on Camp Foster, Okinawa, in 2009. Living-quarters upgrades are in the works at Camp Foster for single and unaccompanied sailors and Marines that is expected to be completed by early 2017. (Thomas Provost/U.S. Marine Corps)

CAMP FOSTER, Okinawa — Living-quarters upgrades are in the works for single and unaccompanied sailors and Marines based at Camp Foster.

The Navy will spend $10.5 million to renovate bachelor quarters for more than 400 enlisted personnel and officers at 3rd Marine Expeditionary Force’s headquarters.

The 25-year-old officer quarters will be outfitted with dedicated telecom rooms on each floor, complete with email and cable television, the statement said. Laundry facilities will also be upgraded. The 37-year-old enlisted quarters will see the most drastic changes, including the replacement of all interior and exterior doors and windows, ventilation system, water lines and bathrooms.

Upgrades will also be made to the electrical systems, lighting and plumbing fixtures, and washers and dryers. Vinyl floor tiles and asbestos will be removed.

The work is expected to be completed by early 2017.

“These contracts will extend the useful life of the homes of more than 400 Marines and sailors living in Okinawa,” Lt. Cmdr. Brad Coleman, director of Facilities Engineering and Acquisition Division Camp Butler, said in the statement. “The projects will provide a homely atmosphere and improve the quality of life for Marines here.”

Two contracts for the work were awarded by the Navy to NIPPO Corporation of Japan.