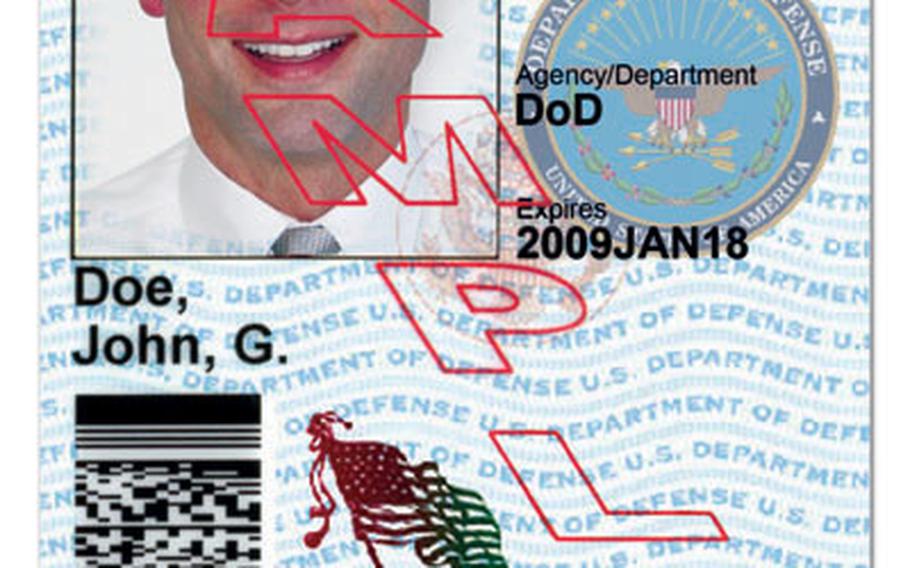 The card, the standard identification for all military and defense workers, has been undergoing a major overhaul to make it harder to forge and easier to use.

Mary Dixon, director of the Defense Manpower Data Center&#8217;s access card office, said the changes in the card were mandated by the president two years ago in an effort to reduce the opportunities for identity fraud.

Dixon said officials plan on replacing all the old cards with the new ones by 2011.

The new IDs feature a hard-to-copy blue background instead of white and have an additional watermark-type print to thwart would-be forgers.

In addition, Dixon said, the chips embedded in the cards will contain digital photographs, digital fingerprint scans and other identifying information to help officials make sure the person carrying the card is actually its lawful holder.

Plans for which employees or servicemembers will see the first new sets have not been announced, but eventually everyone will get a new card when their old one expires. But, Dixon said, no one will have to turn in their old cards before they expire.

The card does not use any radio transmissions because of security concerns, but information on the cards can be ready by contactless scanners &#8212; the same basic technology as quick-pay kiosks at gas stations.

But that new technology means defense officials will have to upgrade their 1,400 card issuing sites before the new IDs can be distributed to everyone.

Dixon said the new card won&#8217;t mean any change in benefits or privileges for troops or employees, and the process of renewing an expired card should remain mostly unchanged.

For more information on the cards, visit www.cac.mil.