(Updated) First hostile death of a Marine in Iraq since October 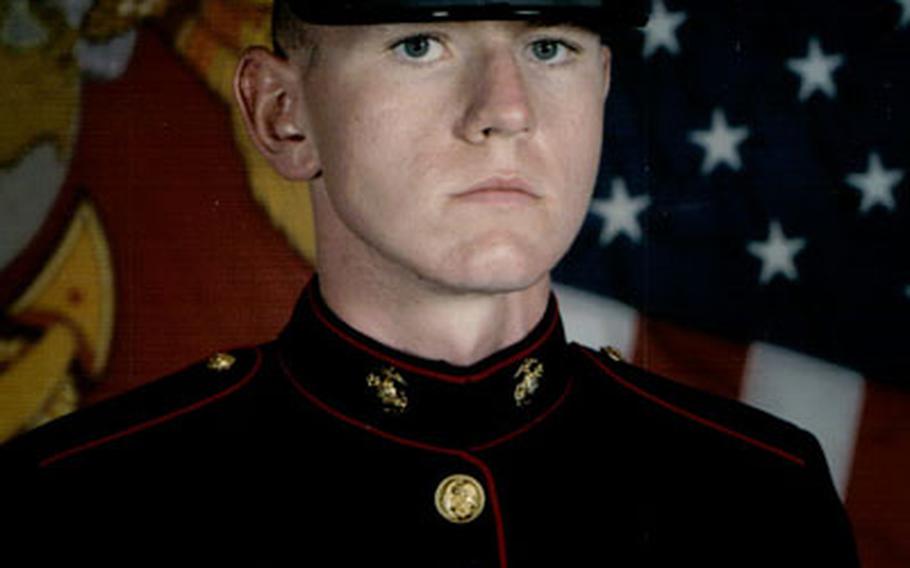 Gluff, of Tunnel Hill, Ga., was assigned to the 1st Battalion, 8th Marine Regiment, based out of Camp Lejeune, N.C.

Gluff&#8217;s widow, Kendra Hope Gluff, said the Corps told her that her husband saved 25 Marines by shooting a suicide bomber, whose bomb then went off.

Gluff was the only one killed in the blast, she said in a phone interview on Thursday.

Kendra Hope Gluff and her husband were married on Sept. 9, 2005, she said. Gluff leaves behind a 14-month-old son, Michael Wayne.

She said she and her husband joined the Corps together, but she was discharged after a year and a half for medical reasons.

She said her husband always wanted to join the military because he wanted to serve his country and that he hoped &#8220;no one else would have to do what he did.&#8221;

&#8220;I think this speaks volumes about the effects our Marines and our Iraqi partners are having in Anbar Province,&#8221; Dent said in an e-mail Wednesday.

Anbar province was at one time the most violent region in Iraq, but things began to change when Sunni tribes allied with U.S. troops against al-Qaida in Iraq.

The Anbar Awakening continued even after the influential Sunni Sheik Abdul-Sattar Abu Risha was assassinated in September, according to the most recent congressionally mandated report on progress in Iraq.

Roadside bomb attacks in Anbar province dropped 91 percent from January to November 2007, said the report, which was released last month.

Now Anbar is now slated to be turned over to Iraqi control in March, the outgoing Marine commander there told reporters earlier this month.

Defeats in Anbar province and Baghdad have forced al-Qaida in Iraq to move to northern Iraq, where Sunnis continue to challenge the coalition and Iraqi government, the progress report said.

&#8220;These groups view themselves as the protectors of Sunnis from the perceived encroachment of the Shi&#8217;a following AQI&#8217;s displacement from the province,&#8221; the report said. &#8220;Perceptions of Kurdish expansionism also fuel Sunni fears and allow AQI to survive as a potential partner for pursuing the Sunni extremist agenda.&#8221;

But the commander of U.S. troops in northern Iraq said al-Qaida&#8217;s presence in the region is based more on intimidation of the local population.

&#8220;If you don&#8217;t have weapons or you don&#8217;t have security forces to counter that kind of action, it&#8217;s kind of difficult to push back against these violent and barbarous criminals,&#8221; said Army Maj. Gen. Mark Hertling at a Tuesday news conference.